Column updated to include video from April 2 Transform Westside Summit

As the sun was setting on Easter Sunday, Vine City community members gathered on Sunset Avenue to commemorate the 53rd anniversary of the assassination of Martin Luther King Jr.

It was a solemn occasion to honor the civil rights leader and the community where he and his family were living at the time of his death. 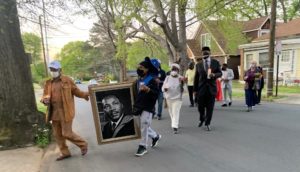 People participate in a candlelight vigil to honor Martin Luther King Jr. by walking to his former home on Sunset Avenue (Photo by Kelly Jordan)

“These are sacred grounds,” declared Bishop John H. Lewis, chairman of the Vine City Civic Association. Lewis, who has lived on Sunset almost all of his seven decades, now lives in the home next to former King home at 234 Sunset.

Lewis invited neighbors and visitors to meet at the Vine City Civic Association center at the corner of Sunset and Joseph E. Boone Boulevard NW. to share remembrances of the community and to participate in a candlelight walk and vigil to the King home less than two blocks away.

Just two days earlier, the Westside Future Fund’s Transform Westside Summit focused on the history and future of Sunset Avenue – with special emphasis on the King home, which was purchased by the foundation of the National Park Service in January 2019 as an important addition to the Martin Luther King Jr. National Historical Park.

NPS Superintendent Judy Forté said it is unusual for a historic park to encompass a cradle-to-grave reflection of someone’s life. The MLK historic park now does just that – incorporating King’s birth home on Auburn Avenue, the Historic Ebenezer Baptist Church where he preached as well as the home where he was living when he was tragically killed in Memphis.

Forté said NPS is working to restore the home as it was when King and his family were living there, and eventually it will be open for the public to tour and see how modestly the family lived when it moved to Vine City in 1965. 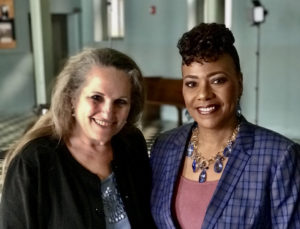 As part of the WFF summit, I was able to interview Bernice King, who was only 2 years old when the family moved to Sunset. Bernice King is now CEO of the King Center, which was founded by her mother – Coretta Scott King – the year after her husband’s death in the basement of the family home.

Bernice King lived in the home until she enrolled at Spelman College in 1983, and her mother continued to live there long after the neighborhood declined, and her neighbors had moved away. In the conversation, she shared how initially she had a hard time letting go of the home where she grew up. But she was able to feel joy knowing the home would be restored and open to the public, which had been her mother’s wish.

Atlanta is overdue in shining a spotlight on Sunset Avenue, Vine City and the Westside.

So much of Atlanta’s history has been taken for granted that many people don’t know and understand why these places are so sacred – from being a mecca for Black colleges and Black culture to the emergence of Atlanta as the cradle of the civil rights movement.

Walking along Sunset, one can see the Atlanta home of the late Julian Bond and his family. Bishop Lewis was a walking history book of who lived in which home, and how they contributed to Atlanta’s history. 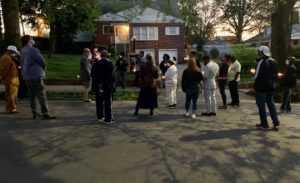 In fact, it was Lewis who sounded the alarm when the King Center applied for a demolition permit for the four-unit dilapidated apartment building (220 Sunset) next to the King home. Lewis knew the building had been developed by Maynard Jackson Sr., who lived there with his family in the early 1950s. His son, Maynard Jackson Jr., went on to become Atlanta’s first African American mayor – elected in 1973.

Fortunately, the King Center – once it realized the significance of the apartment building – agreed to withdraw its demolition permit. Then the Westside Future Fund stepped in to buy and renovate the apartment building with the plan to turn it into four affordable housing units geared to students, faculty and staff at the Atlanta University Center.

Karcheik Sims-Alvarado, CEO of Preserve Black Atlanta, told viewers of the Transform Westside Story that buildings tell a story. And she described many of the stories of people who have lived and worked on the Westside, and the contributions they’ve made to Atlanta and the nation.

Two of those structures – the King home and the Jackson apartment building – have been saved. They will be historical anchors for us as we learn about what happened in Atlanta over the last 150 years. 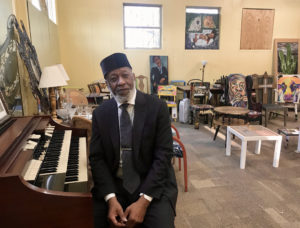 But we can’t stop there. We need to save Gaines Hall. Fountain Hall, the old Paschal’s Restaurant and Lodge, the two homes of Grace Towns Hamilton, the first African American woman elected to Georgia’s General Assembly, to name a few of the buildings in greatest need of repair, renovation and reuse.

Just as the King Center, the National Park Service and the Westside Future Fund were able to find a way to preserve 220 and 234 Sunset, we as a community must find a way to protect the other historic jewels – reviving the spirit that used to exist along Sunset and in Vine City.

As night fell on April 4 and as people left their candles along the front wall of the King home, Lewis remembered how Martin Luther King Jr. used to walk from his house to Paschal’s – stopping multiple times to chat with neighbors and friends along the way.

A bird on one of the trees in front of King’s home chirped loudly as we shared a moment of silence to remember his death 53 years ago. It felt as though King’s spirit was with us – leading us to work on creating a world without poverty, racism and war.

In that moment – on a beautiful Sunday evening among old friends and new friends enveloped with the hope of Spring in the air – King’s vision of a beloved community felt within our reach.

Note to readers: I have a special relationship with 234 Sunset and the King family, which I wrote about in 2013. 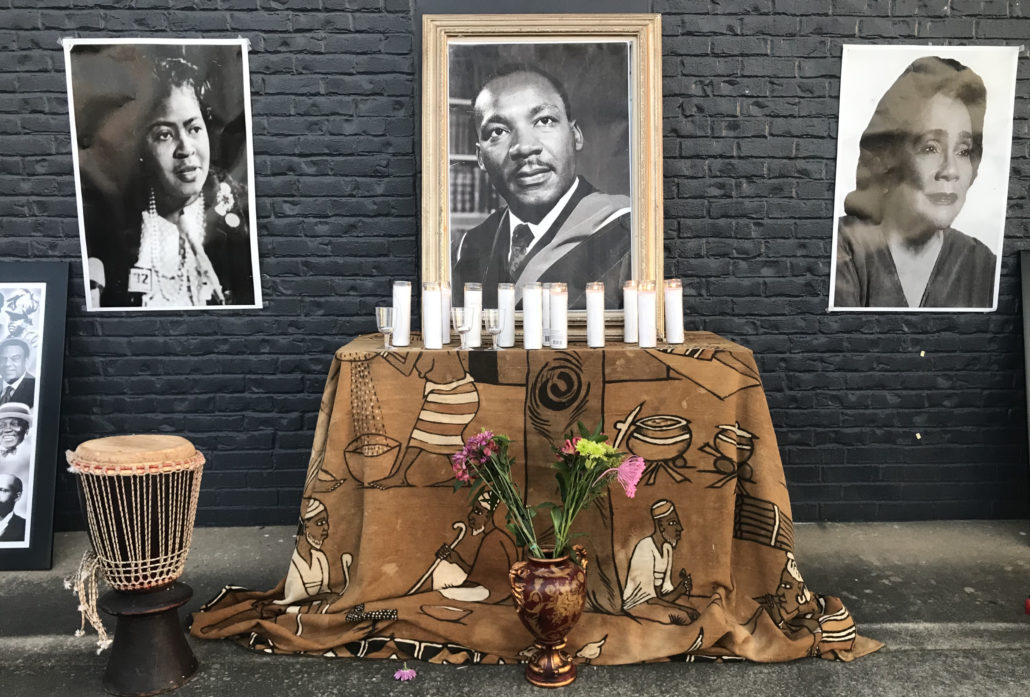 A tribute to Martin Luther King Jr. in front of the Vine City Civic Association building on Easter Sunday (Photo by Maria Saporta) 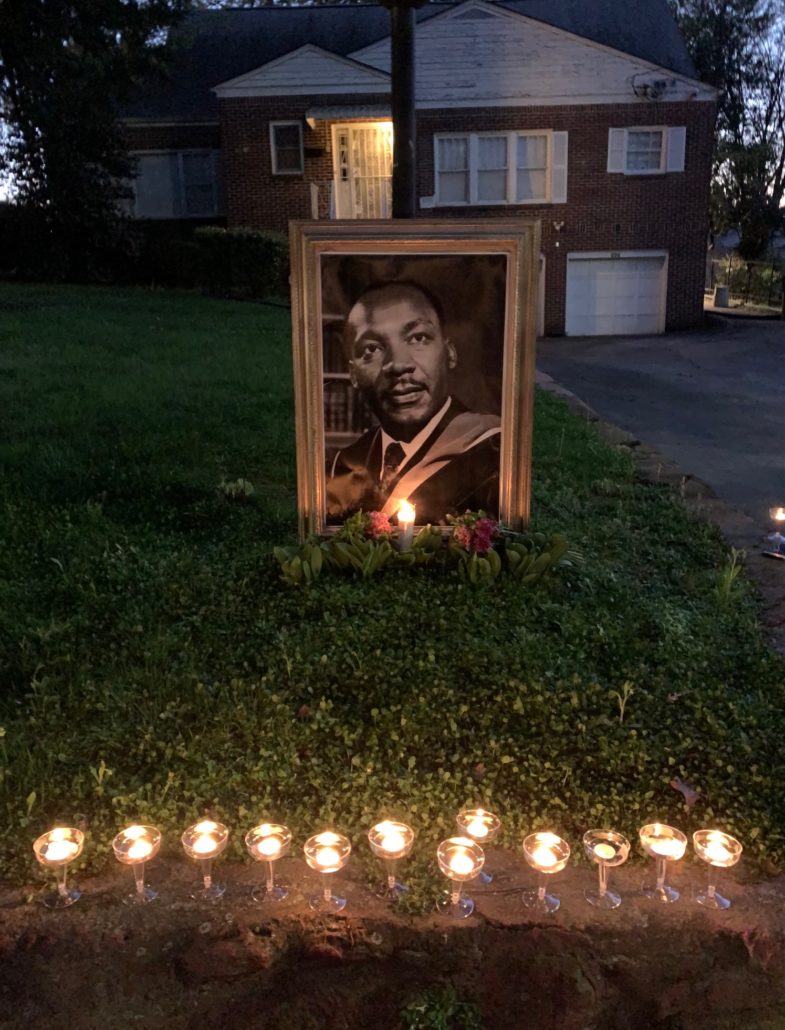 Candlelight tribute to Martin Luther King Jr. in front of the family home on Sunset Avenue (Photo by Kelly Jordan)