Attorney Andy Cash, incoming JDRF Georgia board president, had his Moment when his sons were diagnosed with type 1 diabetes 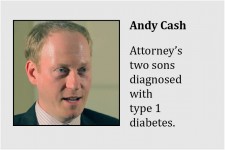 As a personal and catastrophic injury attorney, Andy Cash had grown accustomed to hearing sudden, life-changing events from his clients. His law firm represents individuals and families who have experienced devastating injuries due to trucking and automobile accidents, medical malpractice and defective products. Despite his well-developed professional empathy, the news he learned in July 2004 about his own three-year old son was very difficult to bear.

A year after Andy established the law firm of Cash, Krugler & Fredericks with two longtime friends, he and his wife learned that their three year old son, Gavin, had type 1 diabetes (T1D), an incurable autoimmune disease that affects as many as three million Americans. The Moment Gavin was diagnosed changed the Cash family’s life forever.

“Every Moment of his life had to be monitored in some form or fashion from there forward,” Andy said in our accompanying Moments HD video.

Without a cure, people with T1D are required to monitor their blood sugar through finger pricks and receive insulin injections multiple times each day in order to stay alive. The autoimmune disease keeps the pancreas from producing insulin – a necessary component to break down food and produce energy. A child with T1D must inject insulin into his or her body – often six or more times a day – to regulate blood sugar levels from food intake, too little exercise or too much exercise. Unregulated blood sugar levels can lead to life-threatening hypoglycemic and hyperglycemic reactions.

“Managing a child with type 1 diabetes is every minute of every day and it doesn’t go away,” Andy said.

The mental, physical and emotional exhaustion for a child with T1D extends far past his or her own ailment and into the lives of the young person’s family. With exceptional patience and some time, the Cash family learned to live with Gavin’s disease together.

Then, in October 2011, Andy’s youngest son, Liam, was diagnosed with T1D at age eight– just as his brother had been seven years before. The news was once again shocking and life-altering for the entire family.

After sharing Liam’s diagnosis with the family, Gavin was the first to cry for his younger brother. The diagnosis was difficult for Liam as well, having seen the attention his older brother had to pay to his health.

“Liam said, ‘This is my last day to be normal,’ ” Andy recalled.

“My wife appropriately said, ‘No, this is just your last day to not have type 1 diabetes – you’re completely normal and you’re going to be fine.’ ”

She was right. The family learned to cope with two diabetic children and, while they made a few compromises along the way, they never allowed themselves to inhibit their life experiences and continued with their “normal” lives.

“There is this preconception that if you have type 1 diabetes you can’t have birthday cake,” Andy said. “You can – but it may mean you are checking your blood sugar every hour for four or five hours after that.”

That type of compromise is one Andy said he is happy to make to ensure Gavin and Liam have as normal lives as they possibly can.

“They have their ‘Why me?’ Moments – as we call them in our house,” Andy said. “But they are strong.”

Both Gavin and Liam are active in sports, do well in school and have developed habits for managing their T1D independently that will remain with them for the rest of their lives.

While there is no cure for the disease, there are organizations dedicated to research funding to affect the impact of the disease. Juvenile Diabetes Research Foundation (JDRF) is the leading global organization funding T1D research. Andy and his family became involved with the Georgia chapter of JDRF after Gavin’s diagnosis and at the start of Andy’s career as a founder and partner of his law firm.

Despite the growth of the firm and accompanying demands of being a partner, Andy kept JDRF as a constant priority and in June he will become president of the board for the Georgia chapter of JDRF.

Globally, JDRF has awarded more than $1.7 billion to diabetes research. The Georgia chapter of JDRF contributes to the overall mission of the global organization by raising local funds and offering support groups and educational events for all age groups affected by T1D.

On Saturday, May 11, the Georgia chapter of JDRF will host one of the organizations’ largest fundraising events as well as one of the more successful philanthropic events in Georgia. The Hope for a Cure Gala annually raises more than a million dollars in support of JDRF’s mission. Andy’s law firm will be a gala sponsor for the sixth year in a row.

In addition to fundraising for research, the gala serves to celebrate the progress made by the organization. Type 1 diabetics – like Andy’s boys – have hope for a life without needles and constant monitoring of food, exercise and day-to-day activities because of funding for research advancements.

Andy’s involvement in JDRF began as a quest for information and support for his son, but it soon evolved into a larger part of his and his family’s life. Not only has Andy served on the board, his family regularly participates in Walks for the Cure, as well as serving as the featured family in the 2012 gala video. Moreover, Andy and Donna were honored to co-chair last year’s gala. JDRF is one of the primary charities supported by his firm’s philanthropic donation program. 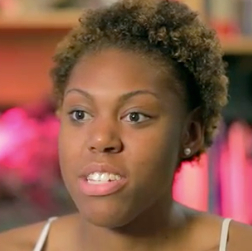 Next week in Moments: Drey Mingo

Next week in Moments: Andrea “Drey” Mingo, Marist, Purdue and WNBA basketball player, on the college day she woke up with meningitis and lost her hearing.