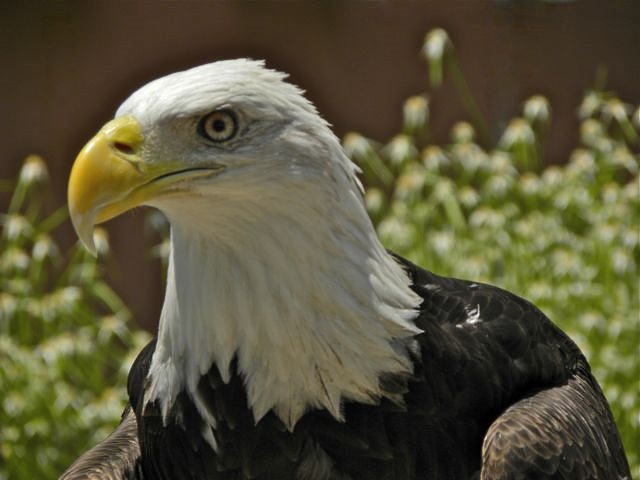 Georgia's bald eagles remains listed as a threatened species and is at danger from being shot by humans, struck by vehicles and from eating prey that's diseased, state biologists say. Credit: Linda May/Georgia Department of Natural Resources

Georgia’s population of bald eagles has survived the ravages of Hurricane Michael, though the storm destroyed 14 nests when it barreled through South Georgia in October, according to a new report from the Georgia Department of Natural Resources on eagle nests in the state. 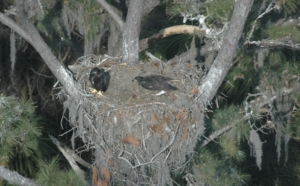 The loss of these nests could be significant. Some nests are used more than 30 years and are enormous – more than 15 feet in height and weighing over 2,000 pounds, according to information on the bald eagle page posted by DNR.

In addition, the estimated birth rate has declined from the long-range average, state biologists reported. DNR didn’t provide a cause-and-effect observation, but did note that a rainy nesting season can reduce the rates of hatching and the survival of the young eagles. Rainfall across Georgia earlier this year was higher than normal.

By comparison, last year’s count of nearly 110 nests produced an estimate of 127 young birds, according to a report. However, the survey was of a different part of the state from the area the survey covered this year.

DRN presented its report as generally positive for bald eagles.

It noted that another good sign – in addition to surviving the hurricane – is that Georgia’s bald eagle population was able to find food during the heavy rains after the storm. Fish are a favored prey of bald eagles, and the heavier than usual rainfall earlier this year caused water levers to rise. The higher waters can reduce the birds’ ability to catch fish, DNR reported.

“If fishing success rates are low, eagles have been known to delay their nesting cycle,” state survey leader Bob Sargent said in the statement. 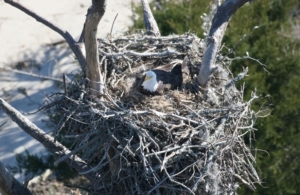 Nests of bald eagles have been measured at more than 15 feet high and weighing 2,000 pounds, according to state biologists. Credit: Georgia Department of Natural Resources

The report on the status of Georgia’s bald eagle population continues a string of good news about the species that once was on the brink of extinction.

Georgia’s resident eagle population has reached the point that Sargent no longers flies over the entire to state to count eagle nests. As of last year, he trimmed the route to an annual fly-over of the entire state and a check of half the state each year, with the other half to be checked the following year.

This year’s aerial check was conducted in January. Sargent covered the state’s six coastal counties, where most nests are located. Sargent also covered the western half of the state, an area bounded roughly by I-20, I-75 and the state lines with Florida and Alabama.

Sargent counted 160 eagle nest territories in this area. The total count of nests for this year is 168, which includes eight nests that are monitored by DNR state or volunteers.

DNR’s program calls for monitoring eagle nesting spots through aerial surveys in January and again in the Spring. The first round of flights aims to identify active nests, defined as those with nests, eaglets, an adult who appears to be incubating an egg, or signs that eagles are preparing a nest for use.

The second check intends to determine the reproductive outcome of those nests that showed such signs, and to monitor recent reports of new nests, according to DNR’s statement. 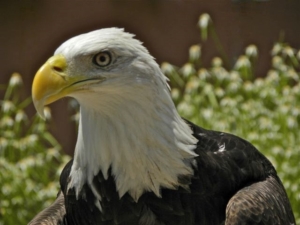 Georgia’s bald eagles remains listed as a threatened species and is at danger from being shot by humans, struck by vehicles and from eating prey that’s diseased, state biologists say. Credit: Linda May/Georgia Department of Natural Resources