At Beatles v. Stones, the anchoring power of music and memory 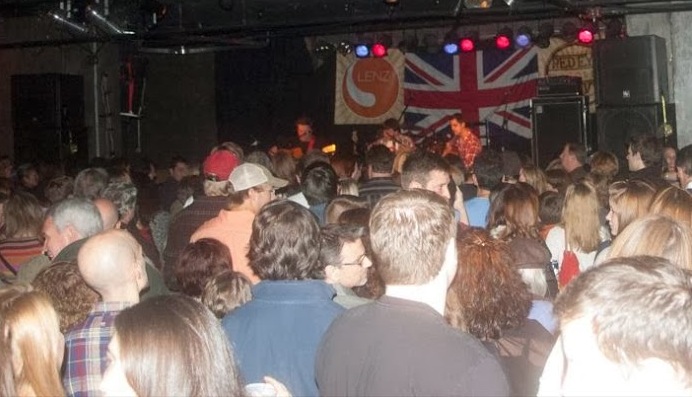 Living in uncertain times, we’re all looking for anchors. Nostalgia is a powerful one, as is music and lending a helping hand. 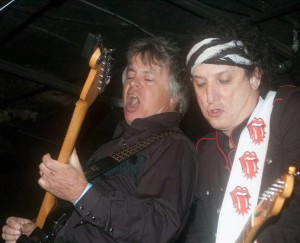 The Jagged Stones were among 13 bands at a benefit celebrating the music of The Beatles and The Rolling Stones.

Friday night, more than 800 people showed up in Midtown to hear 13 bands who tried to recreate the time of peace, love and understanding known as the 1960s, through the songs of two iconic bands: The Beatles and The Rolling Stones.

The event borrowed a bit, on a much smaller scale, from more recent British history of rock concerts for hunger relief. Proceeds from “Beatles vs. Stones” benefit Poverty is Real, a nonprofit that “uses the universal love of music to fight poverty at the local level.”

Sponsored by Lenz Marketing and 97.1 FM The River, the evening likely raised more than $10,000 through sponsorships, ticketing and donations, according to organizer Richard Lenz. His band Johnny Clash also performed a set of Stones songs (admirably spanning the Jones/Taylor/Wood eras in its three-song lineup of “Sweet Virginia,” “Under My Thumb,” and “Respectable”).

The music of these bands is now timeless, but in its day it was revolutionary, and the gray heads in the audience may have flashbacked like I did to a time when rock first moved us and when some of us sought to move others.

Troubles seemed so far away 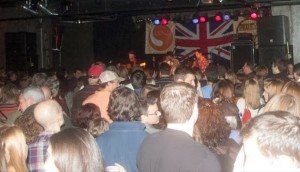 A crowd of 800 plus attended the event at The Loft in Midtown, and around $10,000 was raised for an anti-poverty organization.

Beatles vs. Stones reminded me of my own altruistic early rocker roots in Staunton, Va. I played with a hastily assembled band called Ravenscroft in my first gig in a church basement.

Our audience was a group of mental patients on afternoon leave from Western State Hospital.  We launched into the Stones’ “Sympathy for the Devil”:

Pleased to meet you

Hope you guess my name

But what’s puzzling you

Is the nature of my game

The moment after we finished, an audience member turned to face us. He had spent most of the time staring at a side wall. He issued a two-word critique: “Y’all suck.”

That didn’t deter us. We kept playing, a bit more humbled and humored.

It’s hard not to feel nostalgic when I hear the Stones and other bands of that era, and that’s not a bad thing. Psychologists say those memories can serve as positive anchors.

According to a July article in Psychology Today, Dutch researchers in the Netherlands found that listening to songs made people feel warmer physically. They tested English, Dutch and American adults, inducing nostalgia by playing hit songs from the past and letting them read lyrics from their favorite songs.

The song listeners were more likely than a control group to say they felt loved and “life is worth living.” The head of the study, social psychologist Clay Routledge of North Dakota State, concluded, “Nostalgia serves a crucial existential function. It brings to mind cherished experiences that assure us we are valued people who have meaningful lives. Some of our research shows that people who regularly engage in nostalgia are better at coping with concerns about death.” 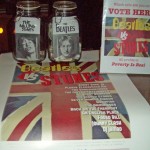 Voting via Mason jars for one of two legendary British bands.

Another more recent memory involves Beatles music. Last year at Anthony’s Pizza and Pasta in Avondale Estates, I listened to my 15-year-old daughter sing “Something” with her classic rock band called “Dali.” Does every dad want his child to surpass his accomplishments? I was proud and honest that her band was much better than mine, and she has music to anchor her through the sucky times of adolescence, like it did for me.

Beatles vs. Stones arose from the Decatur Book Festival, for which Lenz’ company provides marketing services.  Event founder Daren Wang suggested it to Lenz after the 2013 festival included John McMillian, a Georgia State University history professor and author of a book of the Beatles-Stones rivalry (“Beatles vs. Stones”).

McMillian attended the battle of the bands, where he donated and sold copies of his book.

“I think they really are the two best bands,” McMillian said later. “They came about when rock was still new. I think were extremely talented. They had such tremendous power and influence over their generation. I don’t think we’ll ever see two bands like this again.”

While McMillian believed both bands lived up to their hype in terms of talent, they didn’t always live up to their image—at least in the beginning.

“They were seen as being anti-bourgeois and anti-materialist,” McMillian said. “But the Beatles and the Stones were very mercenary. Their desire was to make money and get rich.” 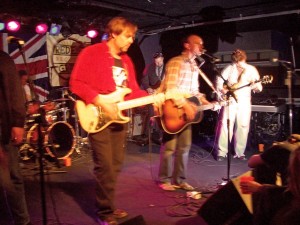 For the Beatles, that attitude may have changed by the time the band split up. After all, it was George Harrison who popularized the concept of the rock benefits with his 1971 Concert for Bangladesh.

The nostalgic trip isn’t over. Lenz hopes to popularize the Beatles vs. Stones benefit with future competitive acts. His ideas include Fat Elvis vs. Skinny Elvis, Lennon vs. McCartney, Tupac vs. Biggie, Nirvana vs. Pearl Jam, Led Zeppelin vs. Metallica.

“I think it may have been Beethoven who said this, but there is no other art that puts you in the mind of the artist better than music and it’s true,” said Lenz. “Music has the power, this mysterious primeval power to move you, so you can move people to action through music.”