Rachel Carson’s 1951 book can be argued as the impetus of Earth Day, which celebrates its 50th anniversary today and through the week with multiple digital gatherings. And the book is not Silent Spring, published in 1962. 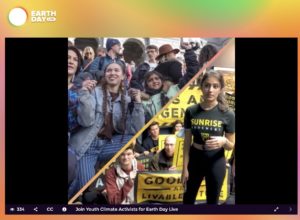 Organizers of Earth Day Live 2020 are trying to build on the momentum of teen climate strikes in several countries in 2019, including one in Atlanta. Credit: earthdaylive2020.org

The Sea Around Us cemented Carson’s position as a premier naturalist writer. Carson was 44 years old when her second book was awarded a National Book Award for Nonfiction, in 1952, and later was published in 30 languages. The Sea Around Us brings observations on human life beginning in the sea and continuing its relation with the sea:

Eleven years after The Sea Around Us, Carson published Silent Spring – a book denounced by the nation’s industrial community that would go on to galvanize an environmental revolution that seeks to bend the trajectory of humankind’s heavy imprint on the natural world.

Carson’s language is far from shrill, viewed in today’s perspective, as she describes the threat from manmade chemicals applied to kill insects and unwanted vegetation: 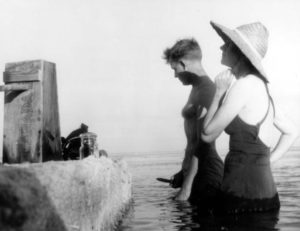 Rachel Carson and wildlife artist Bob Hines looked for specimens in the Florida Keys in about 1955. Hines drew illustrations that appeared in Carson’s third book, ‘The Edge of the Sea.’ Credit: USFWS National Digital Library

Earth Day’s co-founder and first coordinator, Denis Hayes, likewise requires a bit of acceptance for being less than shrill in his early days, at least in terms of his carbon footprint and as viewed in today’s perspective.

Hayes recalls that heady experience on the first Earth Day, when he flew on airplanes to visit sites in Washington, New York and Chicago. Hayes’ carbon footprint that day does not comport in today’s era of flight shame, where individuals are held publicly accountable for their CO2 emissions. Swedish teenage environmentalist Greta Thunberg brought the concept to the world stage.

In a Q/A published on a page of EarthDay.org, Hayes observes of the first Earth Day: 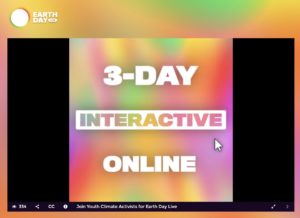 Earth Day Live 2020 has shaped up like a South by Southwest event to celebrate the 50th anniversary of Earth Day. Credit: earthdaylive2020.org

Note to readers: Earth Day Live 2020 is branded as, “We can’t take to the streets, so we’ll take to the internet: Earth Day Live.” Stacy Abrams is to deliver her message Friday at 4 p.m.. The event is billed as, “a three-day livestream where millions of people can join activists, celebrities, musicians, and more in an epic moment of community and hope for the future.”