Before the Flood: Alexander H. Stephens and Abraham Lincoln 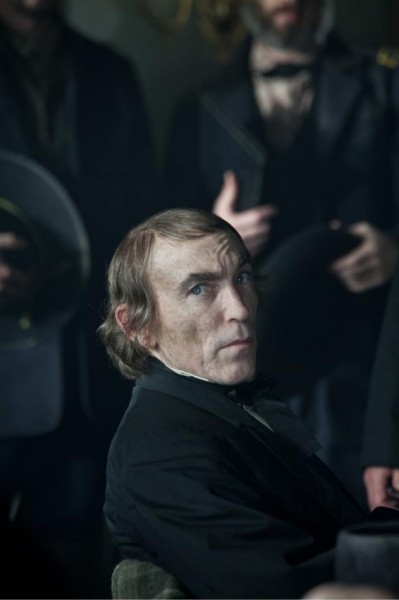 “We are passing through one of the greatest revolutions in the annals of the world — seven States have, within the last three months, thrown off an old Government and formed a new. This revolution has been signally marked, up to this time, by the fact of its having been accomplished without the loss of a single drop of blood.” —Alexander H. Stephens, Savannah, March 21, 1861 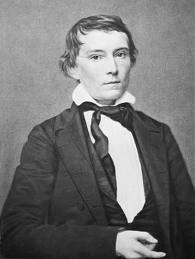 Alexander Stephens met and became friends with Abraham Lincoln when the two served in Congress in the 1840s.

With the Confederacy barely a month old, so began Alexander H. Stephens, vice president of the Confederacy, in a speech in Savannah. This sesquicentennial season of the Civil War gives us an opportunity to explore the most devastating event in American history and one of the deadliest of all civil wars: more than 600,000 combatants died, leaving no American household untouched.

An examination of the letters exchanged between Stephens and Abraham Lincoln before the outbreak of any hostilities can perhaps shed a little light on the war’s origins, just as they as they also highlight their complex nature.

Stephens was no newcomer to politics. A native of Crawfordville in Taliaferro County, near Athens, Georgia, Stephens was a “near-constant force in state and national politics for a half century,” writes New Georgia Encyclopedia author Chad Morgan. Though sickly and weighing no more than 100 pounds — he referred to himself as “malformed” — “Little Aleck” was a lifelong bachelor inside of whom burned a ceaseless ambition.

He helped write the constitution of the Confederacy and was serving as its vice president at the time of his Savannah speech in March 1861. Before that he had served as a member of the House and Senate in the Georgia General Assembly, and a member of the U.S. House of Representatives from 1843 to 1859. 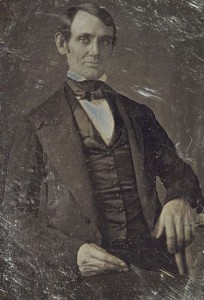 Abraham Lincoln, pictured in the 1840s, around the time he and Alexander Stephens developed a friendship and mutual respect for each other, despite their profound differences on the issue of slavery.

Lincoln served one term in Congress, from 1847 to 1849, and it was there that Stephens and Lincoln became friends. They acquired a sincere, lifelong mutual respect for each other. In agreement on many things while in Congress, they differed on the morality of slavery.

In a letter dated December 22, 1860, Lincoln reached out to the highly influential Georgian in hopes of finding a way of dampening talk of secession.

“Do the people of the South really entertain fears that a Republican administration would, directly, or indirectly, interfere with their slaves, or with them, about their slaves? If they do, I wish to assure you, as once a friend, and still, I hope, not an enemy, that there is no cause for such fears,” Lincoln wrote.

Preservation of the Union was his priority — even to the extent that he “would not object” to amending the constitution to bar Congress forever from interfering on matters of slavery.

In spite of Lincoln’s conciliatory words, Stephens responded on December 30 by stating that the tolerance of slavery by the North alone was not enough to bridge the differences of North-South sentiment: “We at the South do think African slavery, as it exists with us, both morally and politically right,” he wrote to Lincoln. “This opinion is founded upon the inferiority of the black race. You, however, and perhaps a majority of the North, think it wrong. Admit the difference of opinion.”

Despite that difference, he joined hands with Lincoln when it came to secession, believing the Constitution a “leaky boat” that could be repaired, and advocates of secession a “people . . . run mad. They are wild with passion and frenzy, doing they know not what.” This did not mean Stephens doubted the legality of secession. He saw the Union as a “compact” from which a state could withdraw to protect a preexisting state right — the regulation of the institution of slavery being one. Very many did. Lincoln replied: “Only unanimous consent of all the States can dissolve the Union.” Anything else was rebellion.

After Georgia’s special convention voted to secede in January 1861, Stephens threw in with the secessionists, now characterizing the growing movement in the South as a “revolution” that hearkened back to the noble cause of the War for Independence. 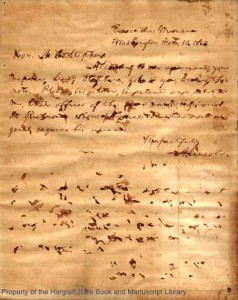 The handwritten note that Lincoln sent home with Alexander Stephens’s nephew. Out of respect for his old friend, Lincoln arranged for the nephew’s release from military prison in 1865. The letter is held at the Hargrett Rare Book and Manuscript Library at the University of Georgia.

Interestingly, we can see that both men changed in their original stated opinions: Stephens on secession and Lincoln on slavery. While Stephens moved from decrying secession to embracing it, Lincoln’s arc was dramatic, too. He moved from a willingness to accommodate slavery, to a more radical position on January 1, 1863, when his Emancipation Proclamation made freedom for slaves in the Confederacy (but not in other slaveholding states) a war strategy. That November, in his famous Gettysburg Address, he elevated freedom to the war’s very purpose. For Lincoln and many Union soldiers and civilians, a new day dawned.

How difficult it was even in those days to fully comprehend the true motivations of government leaders as they expressed evolving justifications and rationales in response to emerging public and political events that had the power to shape, reshape, and even transform their original arguments and goals.

Stances shifted and faltered in response to changing events, sometimes in small incremental degrees, other times rapidly. It is difficult enough to untangle why one person acted as he did; even more challenging is understanding how the public and the leaders who represented them made their final choices, such as to secede or not — to accommodate slavery or not.

What were the tipping points that caused forces and emotions to be released, from which there was no turning back? If the Civil War in retrospect seems an inevitability, on close examination it is just as much a jumble of circumstance, accident, and random occurrences.

In history, questions of right and wrong are inseparable from the lens that we use in our own day. Historical judgments are rarely final, even when they have already been “decided” in law, or in war, or in scholarship.

Issues that divide have a tendency to reappear in new or different guises, often still traceable back to their earlier manifestations. As we try to learn about our past, it is incumbent upon each of us to filter through many factors, never expecting an easy answer, but always realizing that history is made up of human beings, like Lincoln and Stephens, whose minds and hearts can change in critical ways in response to the events of the days they lived in. 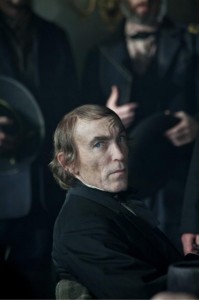 Actor Jackie Early Haley’s uncanny resemblance to Alexander Stephens in the film Lincoln. The movie includes the secret peace conference between Lincoln and Stephens that took place in January 1865.

Stephens and Lincoln did, incidentally, meet again in January 1865, at a secret peace conference in Hampton Roads, Virginia — an episode that Steven Spielberg thought worthy of including in his film Lincoln. Nothing came of the negotiations, but at the end of the meeting, Lincoln asked Stephens if there was anything he could do for him. Yes, said Stephens, he could help in the release of his nephew, a Confederate lieutenant imprisoned in a military camp in Ohio.

Lincoln promptly arranged the release, sending home with the nephew this handwritten note: “According to our agreement, your nephew, Lieut. Stephens, goes to you, bearing this note. Please, in return, to select and send to me, that officer of the same rank, imprisoned at Richmond, whose physical condition most urgently requires his release.”

The letter, with the nephew, arrived at Stephens’ home after the president’s assassination. “I almost wept when I saw it,” Stephens recalled.