Beyond statistics, the economy intersects with the state of our health 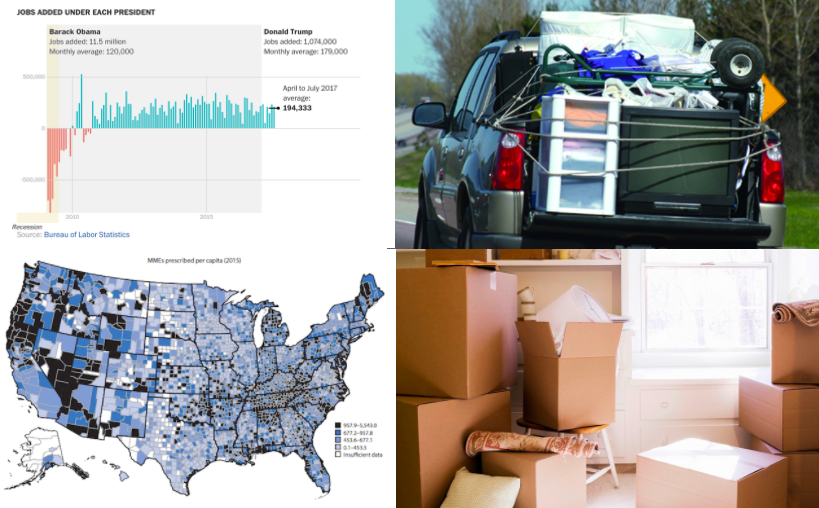 Why are we the only country in the world with an opioid crisis? If we need to create more high-wage jobs, why do so many high-wage positions go unfilled? Why don’t Americans move as much as they used to?

There’s a connecting thread to this tumble of questions. What we refer to in political discussions as “the economy” is always something more than the traditional economic statistics can express.

Last week, the U.S. Labor Department reported that unemployment has fallen to 4.3 percent, close to the level generally regarded as full employment. July marked the 82nd consecutive month of job growth since the end of the Great Recession. But wage growth remains weak. The classic explanation for depressed wages is that they occur when too many workers are chasing too few jobs. But economists claim the current weakness in wage growth is due more to higher paying positions going unfilled.

We typically think of this in terms of high-tech jobs unfilled because our educational system hasn’t churned out enough coders. Actually, the problem goes much farther down, as illustrated by a Washington Post story about the arrival of the first robots at a factory in Wisconsin.

On the day the first two robots arrived, two of the workers on the 12-person assembly line were no-shows. A third was in jail on drug and probation charges, and three slots were open because the company couldn’t find workers to fill them.

“That left six people on the line jumping from spot to spot, snapping parts into place and building metal containers by hand, too busy to look up as the forklift now came to a stop beside them,” Post writer Chico Harlan reported.

This, incidentally, is the kind of rapid, repetitive work which punishes the body over time. There’s a chicken-egg debate about whether joblessness causes the despair that leads to opioid abuse, or whether opioid abuse leads to joblessness. Often left out of the discussion is the role which jobs, and the health care system which treats those who do them, play in this vicious cycle.

We are the only country in the world with an opioid crisis because we have a commercialized medical system which promoted and delivered the drugs faster than any street gang ever could. This was not founded on the treatment of the jobless. It was founded on the mis-treatment of those who had jobs, and the insurance to pay for what would poison them. (The state-by-state time maps showing the increase in opioid overdose deaths, published by Utah Sen. Mike Lee’s Social Capital Project,  give us a chilling picture of how quickly the problem has grown.)

While the rate of work-related accidents has gone down generally, it has edged up for older workers, who are remaining on their jobs longer, sometimes past the limit of their physical and mental abilities. Nevertheless some manufacturers, reluctant to lose experienced workers, are now offering incentives, such as flexible hours and job sharing, to get them to delay retirement.

At first this may seem curiously out of line with research that shows Americans are moving less than ever before, and that those in the prime employment ages, 25-35, are moving much less than earlier generations. Often, however, that employee hanging on past retirement age is the lifeline for two or even three generations of offspring with no similar basis of stability.

“Our country and economy simply offer no support for different ‘tribes’ locked in places that appear hopeless — at least those societal prisons offer friends and family if nothing else,” a reader responded to recent stories which appeared on the website Axios.  “ Doesn’t matter if it’s the inner city or the Midwestern farms or the Rust Belt cities or the Appalachian hills. It’s too scary to move now, Move where? Why? How? For how long? With what support?”

That’s why people who need jobs don’t move to get them.

We could draw many conclusions from all this, but one obvious one is that our health care system plays a central role in our economy, not simply in the cost of delivering care, but in the impact of that care, for good and ill. Which means that fixig the nagging problems in this economy without repairing the health care system is going to be very hard.