The new rule will go into effect on March 20. (Photo by Kelly Jordan.)

Many environmental experts and advocates are applauding a recent decision made by the Biden administration to restore protections of the nation’s waterways that were previously removed and left vulnerable by the Trump administration.

On Dec. 30, two federal agencies — the U.S. Environmental Protection Agency and the U.S. Department of the Army — finalized the “Waters of the United States” rule (WOTUS) which will reinstate federal Clean Water Act (CWA) protections. WOTUS was published to the national register on Jan. 18 and will go into effect on March 20.

In the now-vacated “Navigational Waters Protection Rule” under former President Trump, 53,000 miles of streams in Georgia lost protection and over 160,000 acres of wetlands were left vulnerable in the Chattahoochee Watershed alone. 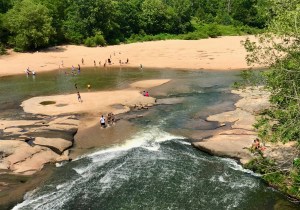 The City of Atlanta and the metro area are home to about 3,412 rivers and streams. (Photo by Kelly Jordan.)

Further south, nearly 600 acres of wetlands by the Okefenokee National Wildlife Refuge were left unprotected, where mining company Twin Pines Minerals wants to mine 582 acres along Trail Ridge, a hydrological divide between the swamp and St. Marys River.

“The fact that the Trump administration called its rule the ‘Navigable Waters Protection Rule’ was quite the misnomer because that rule did not protect many waters at all,” said Kelly Moser, senior attorney and leader of the Southern Environmental Law Center’s (SELC) Clean Water Defense Initiative. “It undercut the objective of the Clean Water Act, which is to restore and maintain the integrity of our nation’s waters, and the Trump administration’s rule completely missed the mark there. The Biden administration’s rule is quite the welcome course correction.”

Under WOTUS, many of those protections are reinstated. Many experts are pleased with the increased protections, but time will reveal the impact of the new rule. One component Moser would like to see is strengthened protections for “geographically isolated wetlands,” like the Carolina bays.

In the southeast, advocates are continuing to keep the Okefenokee Swamp on their radar. Under Trump’s now-vacated rule, Twin Pines didn’t need a federal permit to move forward with its mining plans. But WOTUS states that decisions — also called “jurisdictional determinations” — made under the Trump rule are no longer valid. Additionally, the wetlands and the land where the proposed mining would happen are now protected.

But the plans by the Okefenokee are still in limbo. In November, SELC challenged a decision by the U.S. Army Corps of Engineers to unlawfully reinstate jurisdictional determinations that removed CWA protections. Twin Pines also has four state-level applications pending, and the state has committed to offering two 60-day comment periods but that timeframe has yet to be announced.

“If Twin Pines goes out and fills the wetlands next to the Okefenokee without a federal permit, they will be liable under the Clean Water Act,” SELC Senior Attorney Megan Huynh said. “The bottom line, as we see it, is that Twin Pines shouldn’t be permitted to fill wetlands that everybody agrees are currently protected by the Clean Water Act, especially when doing so would put one of our country’s greatest natural resources at risk.”

One lawsuit, though, could threaten the parameters outlined in WOTUS — Sackett v. EPA. The Sacketts are Idaho landowners engaged in a fourteen-year legal battle regarding their parcel of land near Priest Lake, which was protected under the CWA. Rather than obtaining a permit to build a lakehouse, the Sacketts sued. Now in front of the Supreme Court for a second time, a decision is expected in early 2023. This case is highly contested, in part because it represents a larger issue of polluting industries’ attempts to weaken the CWA.

“[The Sacketts] are backed by members of industry who would like to see the Clean Water Act weakened like we have never seen before. We are optimistic… [but] time will tell what the court decides in the case,” Moser said. “Regardless of what the court decides, Congress passed the Clean Water Act and the objective of the Act is clear — to restore and maintain the physical, chemical and biological integrity of the nation’s waters.”

For more about WOTUS and the CWA, click here.