Typically, calves will nurse for a year or two and remain close to their mothers until around age 10. (Photo taken by Florida Fish and Wildlife Conservation Commission under NOAA permit #15488.)

Environmental experts and wildlife advocates have long called for increased protections for the critically endangered North Atlantic right whale, and the urgency has increased with the calving season underway.

In December, conservation group Oceana filed an emergency petition imploring the federal government to enact immediate protections for the species. The Biden administration has just rejected that petition, stating that the National Marine Fisheries Service (NOAA Fisheries) doesn’t have the time and resources to effectively implement the emergency regulations.

The species has been designated as endangered at various levels since 1970 and in 2017, NOAA Fisheries classified the situation as an “Unusual Mortality Event.”

Under the Endangered Species Act and Marine Mammal Protection Act, NOAA Fisheries is liable to protect the North Atlantic right whale. But the federal government now intends to wait until June to finalize the increased protections. Once implemented, these safeguards will significantly broaden the boundaries of the current seasonal speed restriction areas — which require boats to go slower in certain areas — and increase the number of boats the restrictions apply to. 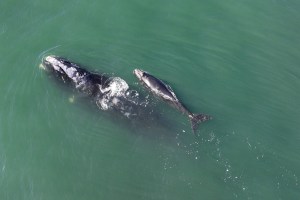 The calving season runs from November to May. (Credit: Georgia DNR/taken under NOAA permit 20556.)

A successful calving season is crucial for the survival of this vulnerable aquatic mammal. Each fall, expecting mothers travel along the East Coast to the warm waters of Georgia, Florida and South Carolina to birth and nurse their young. The whales are known to swim near the coast and they don’t have a dorsal fin, making it difficult for fisherman and other boaters to spot them. The species is largely threatened by human activity, including ship collisions and fishing gear entanglement.

As of mid-January, 11 mother-calf pairs have been spotted along the southeastern coast. For the species to have a chance at survival, experts estimate that less than one whale can die each year. 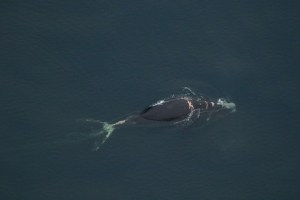 Earlier this month, a weeks-old calf was found dead near Morehead City, N.C. This fatality, in addition to a severely entangled female spotted 20 miles east of Rodanthe, N.C., emphasizes the importance of implementing these safeguards before it’s too late.

“In just the last week, half a dozen right whale sightings have occurred outside of existing protection areas and none of the whales in the southeast region are protected from smaller boats that can and do kill right whales,” Gib Brogan, leader of Oceana’s nationwide right whale campaign, wrote in a recent statement. “The government’s own assessment clearly shows that more needs to be done for this species to reduce the risk of whale mortality.”

Brogan continued: “We expect our leaders to make hard decisions to fix problems. By rejecting this request to quickly act on its own proposal, the Biden administration is assuming risk for this species. If and when a mother or calf is hit or killed before new regulations take effect, the National Marine Fisheries Service and its leader, Assistant Administrator Janet Coit, should be held responsible. North Atlantic right whales cannot wait.”