Hurricane Irma isn’t helping the Port of Savannah as huge ships come and go. The good news is that largest ship ever to call on the East Coast departed Sunday from Savannah. The not-so-good news is that a large vessel is due to arrive Friday at 2 p.m. – just 10 hours before the port is to close. 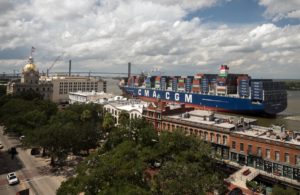 The largest ship to visit the East Coast departed from Savannah a week before Hurricane Irma is slated to pass over the port. Credit:logistics-manager.com

The eyes of the shipping world are on the vessel that left Sunday. She is the largest vessel ever to transit the expanded Panama Canal and represents the next generation in high-capacity cargo ships – the very kind of ship the Savannah Harbor is being deepened to service.

Two weeks ago, the vessel made headlines as she passed through the Panama Canal – all 1,100-plus feet of boat.

“Today’s transit not only represents the growing success and adoption of the expanded canal, but also its impact on reshaping world trade,” Panama Canal administrator Jorge Quijana said in a story published Aug. 23 in the trade publication splash247.com.

The British ship is named CMA CGM Theodore Roosevelt. Her capacity is 14,855 containers that are equivalent in size to a 20-foot trailer towed behind a truck or stacked on a train car. She’s to make weekly trips between Asia and East Coast ports, according to the report on splash247.com.

The Roosevelt landed just after 3 p.m. in a New York port, according to a report by a vessel tracking service.

Georgia port officials must be breathing a sigh of relief that she had cleared Savannah before Irma arrived.

The next big cargo ship was originally due to arrive Thursday, according to a Sept. 1 statement from the Georgia Ports Authority. The British ship is carrying about 14,000 20-foot-equivalent containers.

As of Thursday afternoon, her projected arrival time is Friday at 2 p.m., according to a report by a vessel tracking service. The ship departed Norfolk on Wednesday afternoon. 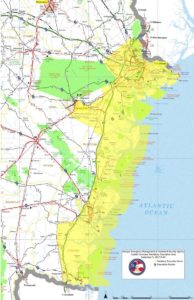 Gov. Nathan Deal on Thursday expanded the state of emergency in advance of Hurricane Irma to include 30 counties. Credit: gov.georgia.gov

The updated arrival time means the CMA CGM John Adams is due at the dock just 10 hours before the port closes in advance of the hurricane.

Vessel operations will end at midnight Friday, the ports authority announced Thursday afternoon. Truck gates will close Friday at 6 p.m. and the port is not accepting empty contains on Friday.

GPA Executive Director Griff Lynch said in a statement Thursday that all area residents and visitors should comply with the evacuation order issued by Gov. Nathan Deal.

“The safety of our employees and partners in the maritime community is our highest concern,” Lynch said. “We encourage GPA staff and our neighbors to heed Gov. Deal’s warning and evacuate ahead of the storm.”

Deal issued an executive order Thursday mandating all citizens east of I-95 in Georgia to evacuate starting Saturday at 8 a.m. The governor ordered that I-16 – the major highway that links Savannah with Macon – be managed so that all four lanes serve as west-bound lanes to facilitate the movement of citizens away from the coast.

Georgia Attorney General Chris Carr’s office is handling consumer protection issues including scams and price gouging. Under the law: “Businesses may not sell, or offer to sell at retail, any goods or services identified by the Governor … at a price higher than the price at which the good or services were sold or offered for sale before the declaration of the State of Emergency.”

For information visit the website of the state’s consumer protection unit.