By this time in January, many New Years resolutions to transform our personal lives have crashed and burned. Ben Dempsey went through years of promising himself to lose weight and get in shape, but each diet or workout put him on a rollercoaster to the opposite results – more weight, less fitness.

So the end of January is a good time to check in with Dempsey, who through willpower and common sense has dropped from 360 to 195 pounds. He will be participating in the Publix Georgia Marathon in March. 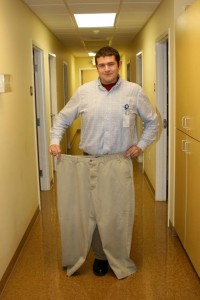 “I had done all kinds of strange diets, like eating tofu straight for six weeks, but when I lost 30 pounds, I would gain 40,” he said. “At the rate I was going, I would have weighed 420 pounds today.”

The big transformation over the past 2 ½ years came from a daily commitment to small consistent changes.

The twist in Dempsey’s “biggest loser” story? He originally lost control of his weight while helping others regain control of their bodies.

Working in physical therapy, Dempsey knew the biggest battle to change one’s body occurs in the mind. Deciding to save his own life was simple – and excruciating.

His superhero journey consisted of many baby steps – taken in size 14 sneakers. It started with a real rollercoaster, nicknamed Superman.

Every summer my dad and I would go to Six Flags and go on every ride. I liked it because you didn’t have to do anything but sit there.

I sat down in the seat, next to my wife, who is healthy and normal size. I pulled the safety piece down across my chest. It would not click. People were staring at me and it was embarrassing. I could not ride the ride. It was like a person who was too big for an airplane seat and was kicked off the flight. 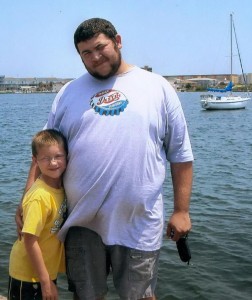 At 6 feet and 360 pounds, I wore 4X to 5X shirts and size 52 pants. I was supposed to be on blood pressure medicine but wasn’t taking it. I was close to being diabetic.

When I stepped on the scales on July 22, 2009, I knew that if I didn’t try to reverse it, I would not make it to age 40.  I wanted to be around for my family. This time, something was different. I thought I could do this.

How he got so big

My whole life, I had been obsessed with food.

I made not the best decisions. At meals, I got extra portions. At night, I would sneak into the kitchen and find something to eat. My parents pushed me to be more healthy, but they didn’t really cook healthy.

At school, I would spend my lunch money on the vending machines, then borrow lunch money to get pizza. I was 250 pounds when I graduated high school, and in college I weighed 300 pounds.

When I started working, I would eat fried stuff at Wendy’s for lunch. I had a long commute home, and I stopped at a gas station for snacks. At home I would still eat dinner. No exercise or anything. It was emotional eating, like alcoholism but with food.

I started by getting rid of sodas — Coke, Mountain Dew, Dr. Pepper – just for one day.

I had been drinking a 20-ounce bottle six to eight times a day. If I had pizza for dinner, I would drink a 2-liter bottle like it was nothing.

Soda was my coffee. In college, I would drink soda trying to stay up and study. I just kind of ballooned myself up.

After a day without it, I thought I could do it for a week. It was really hard. I got some bad headaches. But I lost 12 pounds that week, most of it water weight, and I knew I had some momentum. I decided to do that for a month. Then a year.

I started using my phone to track my calories, with the free LoseIt app. My target was 1500 caltories a day, but I wasn’t that precise. I was trying to cut out the crap and the fried food, but every now and then I had a cheat night – pizza or Mexican every couple of weeks. I used to eat two whole pizzas from Little Caesar’s, so I try not to get back in that habit.

I did some sports when I was growing up, but my feet are flat, and they always hurt. In school, it would take me 30 minutes to finish a mile, and I hated every second of it.

When I got big, I would stay inside. If I had to go out, I sweated unbelievably, and I would think of every excuse not to go out. My wife, who has really encouraged me to make these changes, loves to garden. It was hard not being out there with her and our son. 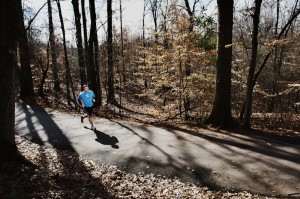 Ben Dempsey began by walking a quarter mile and, eventually, to run. On March 18, he will participate in his first marathon, the Publix Atlanta Marathon (Credit: Paul Kim)

By the end of 2009, after about five months of me eating better and losing about 50 pounds, my wife and I decided to do the Peachtree Road Race together. My goal was to walk it without dying.

I started out walking a quarter mile around the perimeter of the neighborhood. I was out of breath, very sweaty and upset because I couldn’t go far. Many nights I would come home and my wife would ice and massage my feet.

From that first quarter-mile, I tried to walk for 15 minutes and built up from there. I hate treadmills, so I was always outside. I didn’t care how fast, just that I got it done and pushed through the plateaus.

I would see people pass me, and they looked at me like, “There goes that fat kid.” But after a while, I really didn’t care. I told myself, “I’m out here doing it, and I’m laughing at the people back on the couch. That’s all that matters.” 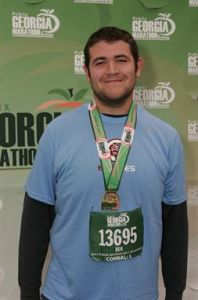 In March 2011, Dempsey finished the 13.1-mile Publix Georgia Half Marathon

I decided to sign up for a half marathon (13.1 miles) , and went online and found the Publix Georgia Marathon and Half Marathon. In March 2011, I finished that half marathon, on the Team 65 Roses that raised money for cystic fibrosis, because my close friend Stephen Starnes passed away from that disease. I raised almost $3,000. Two days later, I knew I would try the full marathon.

Road races help me keep going. I knew this journey would be hard at times, and that keeping the weight off is very hard. I don’t want to be one of those numbers who gain it back. If I don’t keep going, the old me will come back. I’ve worked too hard for this, and if I gave up, I would let down too many other people who have supported me along the way.

After the marathon on March 18, I plan to do my first triathlon – swimming, biking and running – in June.

After I graduated from Loganville High School and then Athens Tech, I became a physical therapist assistant at Rockdale Medical Center. Usually I see seven patients a day. I’m a people person, and I always liked helping people get back to where they wanted to be.

When I was bigger, my coworkers all encouraged me to exercise and everything. I work with some folks who have had bariatric surgery for weight loss, but I didn’t want to go that route.

Some older patients would say to me, “Why are you telling us to do that? Why don’t you do it yourself?” It was constructive criticism, but also frustrating. 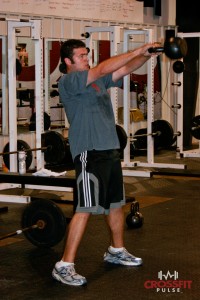 In physical therapy, the mental part  is the majority of the battle. For me it was, too. I knew I was destroying my body. I wanted to be the person who could lose 160 pounds or 100 pounds, but until you get some success, it’s hard to overcome fear. For me, I needed the little successes, like with the sodas, to build up my self-esteem from a public and personal standpoint.

You can have 100 people fighting for you to lose weight, but it doesn’t matter until you flip the switch for yourself. Until I got some positive traction with my new habits, and some momentum, I had never been able to see myself as someone able to lose weight.

Back on the literal rollercoaster

I try not to be prideful about my story, but I will hear some of the therapists tell my story to their patients and that’s neat to hear. Some patients who come back after a long time ask for ‘the big guy’ and I’m standing right in front of them.

The best part is being able to walk in any store and buy off the rack. I don’t have to worry about trying on 1000 pairs of pants or shirts to get something that fits right. I wear size 34 pants now, and large shirts.

At Six Flags, I go on all rides now.

Previous Article
Robert Dale Morgan, leader of sporting events in Atlanta and Houston, passes away at 50
Next Article
ATL concessions: Winning vendor here in legal battle since 2007 in Orlando