A pupil conducts a biodiversity study at the Birdsong Nature Trail. (Photo provided by DNR.)

The two Birdsong children were among the dead, though much of the news coverage of the 1991 plane crash near Brunswick went to former Texas Sen. John Tower.

All 23 persons aboard Atlantic Southeast Airlines Flight 2311 died when the plane crashed on April 5, 1991. Federal investigators determined pilots were not to be blamed: “The pilots of flight 2311 could not have prevented the accident.” The fault was with the propeller on the left engine, according to the report from the National Transportation Safety Board.

Brian and Laura Birdsong were honored the following year, on Earth Day 1992. Oak Grove Elementary School, in DeKalb County, dedicated the Birdsong Nature Trail in memory of the brother and sister.

Brian was 9 years old and his sister was 6 years old. The inscription on their marker along the trail states: “In memory of Brian and Laura Birdsong, who loved to walk in nature. ‘We don’t inherit the earth from our ancestors, we borrow it from our children.’”

Now, the Birdsong Nature Trail is to be restored in time for a rededication ceremony in April. The event will recognize the 30th anniversary of the trail. 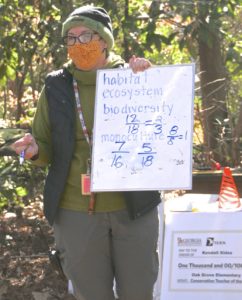 Oak Grove Elementary School STEM teacher Kendall Xides is helping to fund the project with a grant she won as part of her recognition by the Georgia Department of Natural Resources.

Xides won the $1,000 grant that goes with being named Georgia’s 2021-22 Conservation Teacher of the Year. The DNR provides the award with funding from a friend’s group affiliated with DNR’s Wildlife Conservation Section, TERN, standing for The Environmental Resources Network.

Xides’ comments indicate the project is focused on bringing something of value to children today and in the future.

“We hope that during the project, our students, staff and community members gain a better understanding of the importance of conservation and that the Birdsong Nature Trail once again becomes a place where nature and education connect,” Xides said in a DNR statement.

The trail has fallen into disrepair in the 30 years since it was dedicated, according to a page on the school’s website. Non-native plants including English Ivy, privet and nandina have taken over. Timbers alongside the trail have decayed to the point that they no longer mark the boundary between walking trail and natural area, according to the report.

The educational component of the restoration effort is already being implemented.

Third-grade pupils have studied English Ivy and played a game named Spread. The game shows how quickly an invasive species can take control of a landscape.

Fifth-grade pupils are learning about the biodiversity of the nature trail area. They have played a game named Oh Deer! The game teaches reasons how deer can be forced out of an area as food and water become scarce. Then they study why resources can become limited in a wildlife habitat.

These concrete concepts are among the reasons Xides’ proposal was selected best of the year, according to Linda May, outreach coordinator with DNR’s Wildlife Conservation Section.

“Solid learning objectives, cross-curricular creativity, community partners and a passion for empowering students to conserve wildlife habitat made Kendall Xides’ proposal rise to the top,“ May said in DNR’s statement.

The annual award recognizes a teacher of third through fifth grade in public or private schools. The project is to demonstrate “exceptional energy and innovation in teaching life sciences,” according to DNR.