Some Black homeowners do pay higher interest rates on mortgages than non-Hispanic white borrowers, but a new report issued by the Atlanta Fed shows the reason isn’t the rule-of-thumb principle that had associated the cause with racial bias by lenders. 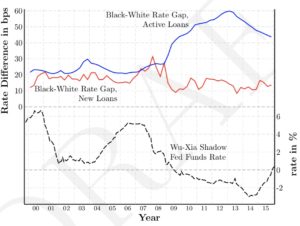 The gap in interest rates is particularly significant for active loans to Black and non-Hispanic white borrowers. The ‘BPS’ on the left axis refers to basic points, each of which represents 1/100th of a percentage point. Credit: Atlanta Fed working paper

These findings are significant in the push to address affordable housing with measures that aim to increase home ownership. Mortgage interest rates can be a barrier because they are part of the financial load of buying a residence. Solutions to such barriers could help more folks qualify to buy a home.

In the case of higher mortgage interest rates, the report shows that some Black borrowers do not refinance their home loans to take advantage of interest rates lower than the homeowner’s current rate.

Non-Hispanic white borrowers tend to refinance their loans when interest rates drop below their current rate.

Consequently, some Black borrowers were paying a mortgage loan interest rate that was almost a half-percent higher than were borrowers who had refinanced their mortgages, according to the latest working paper from the Atlanta Fed: Mortgage Prepayment, Race, and Monetary Policy.

The idea of a race-based reason for some Black borrowers to pay higher interest rates dates to lenders enforcing segregation in neighborhoods. The Atlanta Fed’s report noted that explanations included some lenders charging higher rates on Black borrowers because they were presumed to be riskier; another is that racially biased loan officers simply charged higher rates.

The working paper determined that reasons Black borrowers don’t seek to refinance their home loans are many and varied: 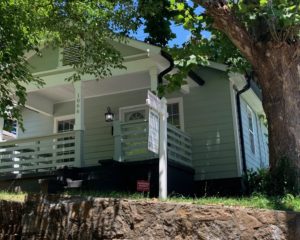 Barriers to Black homeownership include a trend among Black borrowers to not refinance their home loans when rates drop to levels below the existing interest rate, according to a report released by the Atlanta Fed. his home is for sale in Atlanta’s Pittsburgh neighborhood. Credit: Kelly Jordan

However, the report also revealed that some Black borrowers don’t try to refinance, even when their situation is similar to that of non-Hispanic white borrowers:

The ensuing question is how to address the situation. Solutions could include the design and implementation of policies that entice or enable more Black borrowers to refinance their mortgages when rates become favorable:

The report examined a period from 2005 to 2020. The report evaluated loans insured by Fannie Mae or Freddie Mac. They insure a great proportion of home loans in the U.S., which reduces risks to lenders and therefore lowers the cost of borrowing.

The report comes as the two entities reach a crossroads in the coming Biden administration. The administration faces a decision that could have major impact on the nation’s financial machinery for home ownership.

Fannie Mae and Freddie Mac are two federally backed entities that buy and insure mortgages to ensure a reliable source of home loans. Since the economic collapse of 2008, Fannie and Freddie have been majority-owned by the Treasury Department.

The question of how to return them to private hands will be left to the Biden administration, Treasury Secretary Steven Mnuchin indicated Dec. 15, according to a report in wsj.com. The question will be atop the inbox of presumptive Treasury Secretary Janet Yellen. Yellen previously has said Congress has to help determine the fate of the two federal insurers, according to a 2014 report by reuters.com.

The researchers at the Atlanta Fed reached their conclusions after using a new method to evaluate differences in interest rates for Black and non-white borrowers who had mortgages insured by Fannie Mae or Freddie Mac.

The working paper, Mortgage Prepayment, Race, and Monetary Policy, was researched and written by Kristopher Gerardi, a senior policy advisor at the Atlanta Fed; Paul Willen, a senior advisor at the Boston Fed; and David Hao Zhang, a doctoral candidate at Harvard University.