She is making Atlanta home for the third time as the new Chief Inclusion and Diversity Officer for Marsh & McLennan.

“I truly believe that this organization is poised for greatness in inclusion and diversity,” Shaw told SaportaReport.

Being one of the first to lead significant companies and sports teams in the diversity and inclusion field, Shaw has been working in this capacity for over ten years.

With the number of organizations making an effort to diversify, Shaw aims to help them “solve the gaps in representation” and finding ways to close them.

Shaw received her bachelor’s degree from Spelman College, Shaw studied abroad at the University of Oxford in England and went on to receive her Master’s at UPENN. After graduation, Shaw started the human resources career that led her back to Georgia’s capital city as Senior Vice President of Global Diversity & Inclusion for public relations firm, Edelman, in 2013.

There, she conducted crisis counseling for the Atlanta Hawks in 2014 after tapes of then-general manager Danny Ferry making racist comments while reading a scouting report were leaked to the public earlier that summer.

Shaw consulted with Hawks CEO Steve Koonin to create a Chief Diversity and Inclusion officer position, which was a first for the NBA.

“And then he said ‘I’m going to create it, and I’m going to be the first CEO to create a Chief Diversity & Inclusion officer at an NBA franchise,’” she said, recalling her conversation with Koonin. “And then I said, ‘well, if you get that done, then I’m going to apply for the job,’ and that’s what precipitated me leaving my job at Edelman to join the Atlanta Hawks in that capacity.”

After a five-year stint with the Hawks, Shaw moved with her husband, Keith, then three-year-old daughter, Lacy and seven-month-old Hudson across the country to Seattle as Global Chief Inclusion & Diversity officer for Starbucks Coffee Company in 2019. With the Black Lives Matter Movement highlighting several examples of police brutality resulting in the deaths of George Floyd, Breonna Taylor, and Georgia’s Ahmaud Arbery and Rayshard Brooks, Shaw played a pivotal role in helping Starbucks create a culture of inclusion, diversity and equity. There, Shaw helped the coffee powerhouse establish a strategic vision for the path ahead in the future.

Shaw helped Starbucks create best practices that helped them increase their retention rates and progress towards achieving Black, Indigenous and People of Color (BIPOC) representation of at least 30 percent at all corporate levels and 40 percent at all retail and manufacturing roles by 2025. 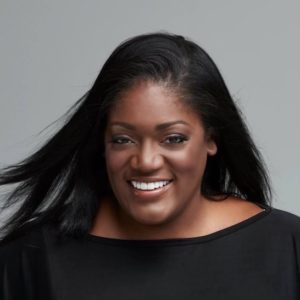 Once again, Shaw is now back in Atlanta, just in time to have her third child, Keith III, who they lovingly call Trey.

She plans to lead the international company into greatness by bringing innovation, empathy and patience to her new role.

“I say innovation because historically, this organization has built a strong legacy and culture on being known in the areas of risk strategy and people,” Shaw explains., “I believe that inclusion and diversity will help them bring new solutions that they have not leaned into previously.”

As a way of showing empathy, Shaw said she would use conversation, listening and learning to help her build a new skill set that would not only make Marsh & McLennan’s employees better colleagues towards each other but better counselors for the clients they serve and the communities they live in.

“There’s a saying ‘you should have done that yesterday,'” said Shaw, “and we’re moving so fast that we’re missing the beauty of our journey. I realized that to get to sustainable outcomes in inclusion and diversity, it takes time, and patience and dedication to go down an intentional path towards success, and it’s not fast.”