The Atlanta metro county has over 41 government officials that are Black females, the most in the country.

Earlier this month, the Clayton Crescent declared that their citizens elected a record-breaking 41 Black women to local, state and federal positions in last year’s elections.

State Rep. Sandra Scott told the nonprofit publication, “this is our time; this is our season!” 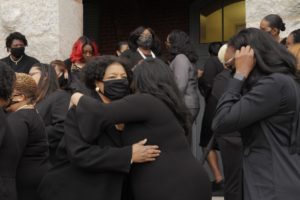 From mayors to state senators and now a congresswoman, Clayton County chose to have African American women represent them in all government facets.

District Attorney, Tasha Mosley, thinks it’s positive for her constituents, especially young girls, to see that they can one day be leaders themselves. “Growing up, somebody that looked like me wasn’t the norm,” she said., “To see any of us that are in leadership roles shows them that, yes, through hard work and perseverance, you can make it. You can do it.”

Earlier this month, the officers gathered at the old courthouse in downtown Jonesboro to mark this historic moment by having an official picture.

Mosley told SaportaReport, “we might not all be together, but just to get the number that we had for that day for the picture, knowing that there were still several women that were missing, it was quite impressive and made me smile.”

State Rep. Rhonda Burnough was one of the picture coordinators and thought it was a nice touch to celebrate the occasion this month.

“As we celebrate Women’s History Month, I look forward to being surrounded by amazing women who are committed to bettering our communities,” she told the Clayton Crescent. 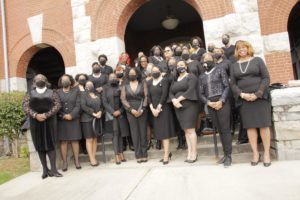 “You don’t think about those things,” District 3 Commissioner Felicia Franklin said. “You’re just there to work and to serve the citizens, and then next thing you know, people take notice and you don’t even realize that we are the largest group of elected African American women.”

Franklin, whose district includes College Park, Riverdale and Lake City, said that the county has over 423,000 residents and 53.3 percent of them are women and mostly single.

When Franklin was first running for office, she was criticized for her gender and for being a parent. However, the nay-sayers didn’t prevent her from representing her district.

“It’s very important for us to help folks to understand that even though we are women,” Franklin said., “We bring a different perspective and we’re elected to serve the people.”