The National Center for Civil & Human Rights on Monday got a $1 million boost from The Arthur Blank Family Foundation and unveiled revised plans for a more affordable and efficient building.

The center now has raised $73 million to date. It still needs $12 million before breaking ground, which is set for October.

Center leaders have said they would not break ground until they had raised at least 80 percent of the project’s construction costs. Opening is planned for 2013.

A reconfigured 63,000-square-foot center debuted Monday, removing an auditorium and cutting the total cost to $100 million, down from the original $125 million. The new budget also includes about $15 million for an endowment and other programming costs for the center. 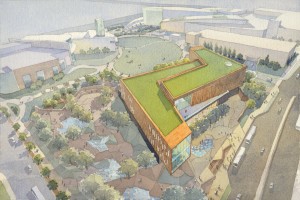 Aerial rendering of the National Center for Civil and Human Rights

“We are confident because we have come this far in spite of the recession,” Shirley Franklin, co-chair of the center and former Atlanta mayor. “Donors are still coming forward… We wanted to have no debt on this building and we are doing this debt free.”

“Thanks to their contributions, the center is on track to complete its fund raising within six years compared to the 13-year average to build a cultural institution,” said Doug Shipman, CEO of the center.

The center also announced in December it was hiring Deborah Richardson to be its executive vice president of fundraising and program development.

Over the past several years, Atlanta leaders have been putting the pieces in place for the attraction.
Center officials have selected the architectural team — the Durham, N.C.-based Freelon Group and HOK of Atlanta — and their design. The design has two interlocking structures that hark back to the symbolism of the Civil Rights Movement when people would march with interlocked arms.

A new streetcar is set to begin operating in March 2013, and it will connect the center to Auburn Avenue and King Center.