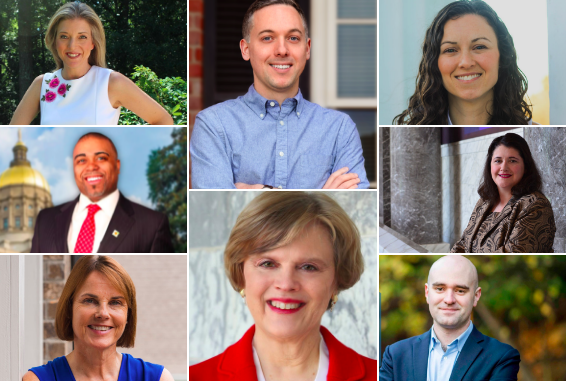 Last week’s election did more to reshape the political map of Georgia than any since 2002, when Sonny Perdue’s victory in the governor’s race triggered the shift to a Republican majority in the General Assembly. We can say that, even before the last details of the election have been ironed out.

In Metro Atlanta, Democrats picked up a congressional seat, two state senate seats and 14 house seats. It could have been worse for Republicans. The outcome of the 7th District Congressional race still is in dispute, and several Republican legislative incumbents won by razor-thin majorities, in districts they were winning a decade ago by 65 percent or more.

Assuming Brian Kemp wins the governor’s race, a Republican will preside over the next reapportionment. But unless Republicans stage a comeback in 2020, he will be dealing with Democratic majority delegations from all the core Metro counties, and local delegations are generally given wide latitude in drawing their maps. Democrats took the majority in the Cobb and Gwinnett delegations last week, and they now hold every seat on the DeKalb delegation.

Republicans drawing new legislative maps after the 2020 Census will be facing a problem much like the one Democrats grappled with in Georgia two decades ago. They have to figure out how to protect their incumbents in rural areas which will be losing representation, while minimizing opportunities for the opposition party in the growing Metro counties and fileting out the Metro districts where their party can win.

As the Democrats proved, having control over the process brings with it a huge danger of overreach and unintended consequences.

Excitement over Stacey Abrams’ campaign for governor lifted the blue tide all over the Metro area, speeding changes many observers hadn’t expected for another cycle or two.

“When a friend of mine; suburban, married, early 40’s with two kids and a GOP voting record brags to me on Facebook that she travelled from Cherokee County to Cobb to knock doors for Stacey Abrams, we’ve lost the messaging war,” Cobb Republican Chairman Jason Shepherd opined in a post-election report.

But races like Sen. Jen Jordan’s convincing victory over challenger Leah Aldridge look like evidence of a deeper shift. Jordan won the special election to replace Republican gubernatorial candidate Hunter Hill last year. This year she defended the seat against a well-funded and highly regarded challenger.

Democrat Matthew Wilson’s win over incumbent Meagan Hanson in the battleground Brookhaven house district highlights the problems Republicans faced in the Metro area this year. It’s safe to say Hanson was the first Republican ever to cut a campaign ad touting her support for MARTA. But in addition to co-sponsoring the MARTA expansion bill, Hanson cooperated with the Republican effort to abolish the DeKalb CEO, making her vulnerable to the blue tide.

Looking back to previous elections helps one to fully appreciate what Kemp pulled off last week. He didn’t just win rural Georgia overwhelmingly. He got more votes in counties which have static or declining populations than they generated a decade ago.

Going forward, the problem for Republicans is that even with a turnout in the rest of the state which will be hard to repeat, Kemp’s narrow majority (assuming it holds up) still depended heavily on Metro Atlanta. His three top counties in number of votes were Cobb, Gwinnett and Fulton. Hall, the home of outgoing Gov. Nathan Deal and Kemp’s primary rival, Lt. Gov. Casey Cagle was his fourth best and DeKalb, where he got less than 16 percent, was his fifth best.

It’s a paradoxical situation where the hard core of Kemp’s support is thinly spread across the state, while the margins are highly concentrated. That’s a combination which will require some pretty clever governing strategies for him to have many successes as governor.

Some of the Democratic victories in the Metro area were as thin as Kemp’s lead in the governor’s race, and could be undone in the next voting cycle. Tides, including blue tides, ebb and flow. But this one changed the landscape, giving a new stage to leaders like Gabe Okoye, the Democratic Party chair in Gwinnett, where the party flipped seven legislative seats, two county commission seats, at least one school board seat and defeated incumbent Solicitor General Rosanna Szabo. This tide also exposed new opportunities for Democrats, like the 7th District, where Republicans can now expect repeated challenges in the future.

Georgia democracy: A hit show that’s getting harder to produce