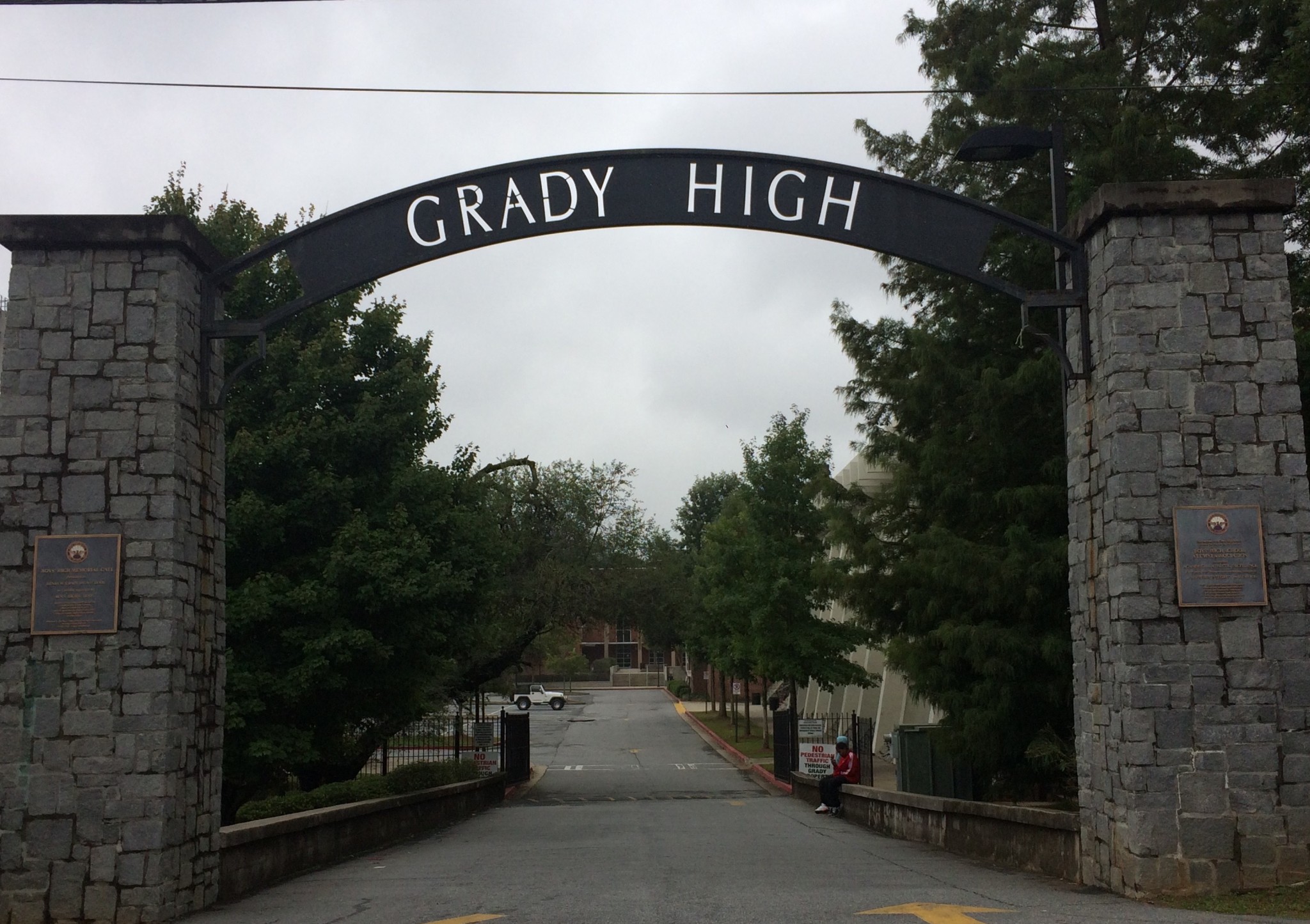 By Guest Columnist LEON S. EPLAN, 1946 graduate of Boys’ High of Atlanta and former planning commissioner for the City of Atlanta

Boys’ High closed in 1947 after providing more than 7,000 students with an excellent college preparatory education. Since then, the Atlanta Boys’ High School Alumni Association has been making significant contributions to Grady High School – the site of Boys’ High.

Recently, the Boys’ High Alumni Association (ABHSAA) signed an agreement with Timothy Guiney, Grady’s principal, to hand over the entire assets of its foundation – currently worth more than $800,000. 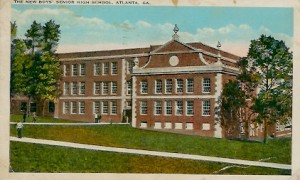 Boys’ High Atlanta around in 1926 – designed by noted Atlanta architect Philip Shutze of the Hentz, Reid and Adler firm designed in 1924

Those assets, which are being administered by the Community Foundation for Greater Atlanta, will go towards two efforts.

First, it will maintain three learning centers – one for writing, which currently exists, another for reading and a third for mathematics. Each will receive $30,000 annually and will provide students with additional scholastic assistance in these subjects.

The second effort will go towards two graduating seniors each year, who will be selected to receive an annual $5,000 scholarship for four years – totalling $20,000 – to attend a college of their choice. Preference for these scholarships will be given to students in need of financial assistance.

All monies to Grady High have been placed in a Boys’ High Legacy Fund and every grant will carry the message: “Funds provided to Grady High School by the Boys’ High School Alumni Association are being given with sincere appreciation to H.O. Smith, Principal of Boys’ High, and the school’s outstanding educators.” 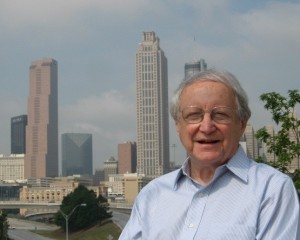 There is much more in this story.

Boys’ High School of Atlanta was established as an all-male educational institution on Jan. 30, 1872, only eight years following the city’s almost total conflagration in one of the final great battles of the Civil War.

Doors on that day, nearly 144 years ago, were opened for 24 pupils in two rooms on the second floor of a downtown building. There, they received a rigorous classical education in preparation for college. This included courses in mathematics (algebra, physical geography and arithmetic); languages (French and Spanish, along with Latin, Greek and German); several sciences (including chemistry, astronomy, and philosophy); and English (including, rhetoric and grammar).

That same year, seven more city schools were opened, including Girls High School, which occupied a mansion which had been used by Union General William T. Sherman as his headquarters during his occupation of Atlanta. Also, two of these schools were for black students.

A department of manual training within Boys’ High was offered to appeal to boys who were interested in exploring the emerging world of applied science, electricity, automobiles, aviation and skilled manufacturing. As interest in these subjects grew, there was a need for a new and separate school and, in 1909, the Technological High School was established. 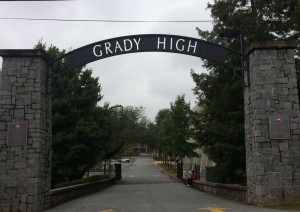 The alumni of Boys’ High raised $50,000 to build the Grady Archway over the driveway from 10th Street (Photo by Maria Saporta)

Finally, Booker T. Washington High School – named for the famous black educator – opened in September, 1924. It was the first public high school for blacks in the State of Georgia and the Atlanta Public Schools system.

Boys’ High moved to eight different sites in its early years. Finally in 1924 Boys’ High found a permanent location in a new Midtown building, which it shared with Tech High – a fierce rival. Today that building is occupied by Henry W. Grady High School.

There, under Principal H. O. (Herbert Orlando) Smith, Boys’ High continued to give graduates a classical education, with over 90 percent of each class continuing in higher education.

Enrollment grew steadily, to more than 1,100 students, with graduates of Boys’ High becoming the leaders of the city, state and the nation, excelling in public service, academics, business, law, medicine, the arts and literature, judgeships, finance and the military. 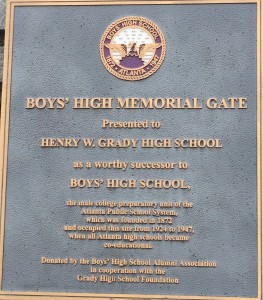 When the Atlanta School System became coeducational in 1947, Boys’ High School closed – but its 7,000 alumni remained devoted to the instiution.

In recent years, the BHSAA sought to assist Grady High through its support of a number of programs. In 2002, it wanted to have an acknowledgement that Boys’ High had once been located on the Grady campus.

After several discussions with then-Principal Vincent Murray, members of the faculty and others, an agreement was reached to build a Memoria Gate archway over the driveway off of 10th Street leading into the parking lot. The Alumni Association raised $50,000 for the archway, which prominently displays the Grady High name at the crest. On each of the pillars, there are two plaquest that note the existance and signficance of Boys’ High – stating that it had occupied that site from 1924 to 1947.

The inscription on the historical plaques was written by alumnus and journalist George E. Goodwin, the first recipient of the Pulitzer Prize given to an Atlanta newspaper. 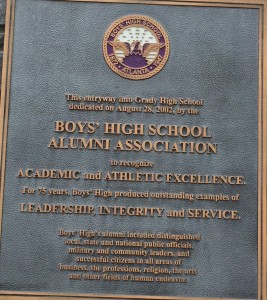 In gratitude for that project, the Grady High School Foundation reserved a permanent seat for Boys High on their board.

Finally, for years in the past, BHSAA has agreed to underwrite all expenses of any Advanced Placement faculty who wishes to attend courses and seminars on subjects related to their academic field or interest, as well as discover academic innovations which might be brought back and introduced into Grady’s curriculum.

It should be noted this largesse comes from an alumni of less than 500 members of a school tha closed its doors 68 years ago.

The graduates of Boys’ High simply want to express their deep gratitude and affection for the education they received. At the same time, they seek to help Grady High continue to be one of most outstanding institutions of learning in Atlanta and Georgia.

Note to readers: Leon Eplan of the Class of ’46 also served as chairman of the Atlanta Boys’ High Alumni Association Legacy Committee.