Five recommendations could prevent another BP type of disaster from damaging the environment. Just five, if they were followed, according to a report released Tuesday by Oceana, the international ocean conservation group that has an office in Savannah and fights efforts to drill for oil off Georgia’s coast. 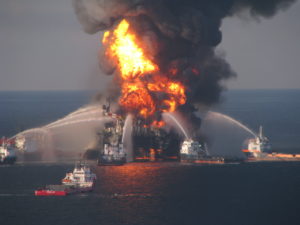 This iconic image of the blaze at the Deepwater Horizon shows the effort to extinguish the fire on the vessel, which would sink two days after the explosion. Credit: U.S. Coast Guard via Oceana

April 20 marks the 10th anniversary of the explosion aboard BP’s leased Deepwater Horizon exploratory rig. Ten years since 11 workers were killed, 17 were injured, and oil began gushing from a gash nearly a mile deep in the bottom of the Gulf of Mexico.

Oil would spill for 87 days before the hole was sealed, a hole drilled 18,000 feet beneath the sea floor in search of fossil fuel. The entire disaster drew 24/7 news coverage akin to man’s first steps on the moon. An estimated 3.19 million barrels of oil spilled, some of it fouling the coastline of five states – Texas, Louisiana, Mississippi, Alabama, and Florida, according to a report by the National Oceanic and Atmospheric Administration.

For 56 pages, Oceana’s report presents a detailed look at what went wrong, who got hurt, what was damaged, and what’s been learned since the oil rig blew up and sank, two days later. The title is, Hindsight 2020: Lessons We Cannot Ignore from the BP Disaster.

In this era of COVID-19, the details are almost too much to bear: 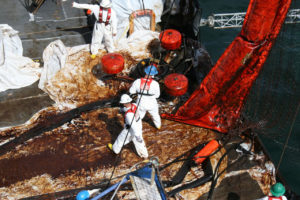 Crewmembers of the U.S. Coast Guard Cutter Aspen, homeported in San Francisco, recovers fast sweep boom after oil skimming operations in the Gulf of Mexico less than one mile from the shoreline, on June 28, 2010. Credit: U.S. Coast Guard via Oceana

One development is so new that Oceana’s report doesn’t mention it, and it weighs on Alabama’s clean-up efforts: The collapse of the global energy sector has caused a reduction in the credit outlook of BP’s parent company, and with it the outlook on $571 million in bonds sold by Alabama. The credit drop was announced this month.

The state plans to repay the debt with proceeds of its share of the BP Settlement, a total of $20.8 billion to be shared by the affected states. The credit outlook of BP was lowered April 1, by analysts with Moody’s Investors Service who cited: “the material impact that dramatically reduced oil and gas prices will have on the company’s financial profile.” A week later, April 8, Moody’s reduced the outlook on Alabama’s BP-backed debt to negative from stable. 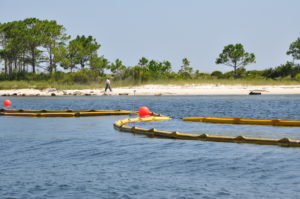 Floating booms were spread atop the water to trap oil spilled by the BP disaster before it reached the shoreline at St. Andrews State Park, at Panama City Beach. Credit: David Pendered

Oceana’s report recommends five measures to prevent a recurrence of the BP disaster. Here they are, verbatim:

1) President Trump should halt all efforts to expand offshore drilling to new areas. 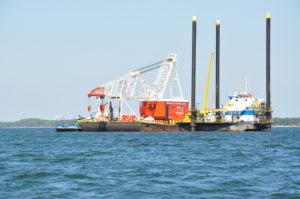 3) President Trump should direct the BOEM to deny all pending geological and geophysical seismic permits for oil and gas in the Atlantic Ocean.

4) Congress should enact a moratorium on expanded offshore drilling. 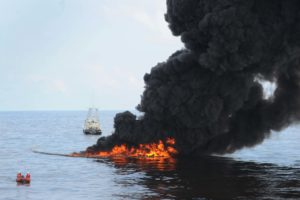 A contracted fishing vessel, Mark and Jace, pulls an oil boom during a controlled oil fire in the Gulf of Mexico in a joint effort by the U.S. Coast Guard, BP PLC, and federal agencies to aid in preventing the spread of oil following the explosion aboard the Deepwater Horizon. Credit: U.S. Coast Guard via Oceana

Previous Article
2020 Census lurches forward under the cloud of the pandemic
Next Article
Grady Memorial Hospital bed supply to remain at half strength; 76 ventilators available