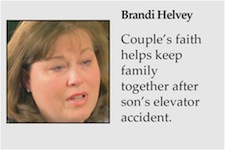 Brandi Helvey was rushing around her house on Christmas Eve 2010, getting her family ready to go on a trip when tragedy struck – permanently altering not only the upcoming holidays, but the lives of her son, her husband Mike and herself.

“In a matter of five minutes, as I’m upstairs, he decides to call the elevator cause he wants to come see me,” Brandi recalls in our HD Moments video. “He’s like ‘Mommy, mommy, I want to come see you.’ And I said, ‘Just a second, I’ll be right down.’ The elevator was on for a second and then there was silence. So, at that point I come running down the stairs. I’m tugging and I’m pulling on the elevator door.

“Somehow under the power of strength, I was able to open the door. At that point, you know, I see Jacob trapped from here down, that he’s kind of stuck between the floors.”

Jacob had become trapped in the elevator shaft when the heavy door that provided access to the elevator closed behind him, shoving him into the accordion safety gate that had just enough space for his young body to slip into and become caught in the shaft, exposing him to the bottom of the elevator when it returned to the main floor of the house. Jacob was crushed between the elevator and elevator shaft wall.

Seeing her child trapped in the shaft, Brandi screamed and ran to the telephone to call 911. Hysterical, she was unable to coherently convey the situation to the 911 operator before hanging up the phone to run to a neighbor’s house to seek help. Fortunately, since she called 911 from her home land-line telephone, the operator was able to locate the address of the house and immediately dispatch rescue services. Had she called from her cell phone, such location services would not have been available. That was the first of many incidents that Brandi now looks back on as being God-ordained assistance.

When emergency personnel did arrive, they had to use the “Jaws of Life” device to cut their way into the shaft to retrieve Jacob, who by then had been deprived of oxygen for many agonizing minutes.

As Mike and Brandi and other family members gathered at the hospital, neighbors held a candlelight vigil outside their home. Instead of singing Christmas carols, neighbors prayed for Jacob to survive the accident. The first reports were not optimistic.
“The night that the accident happened, they told us that Jacob wouldn’t live through the night,” Brandi recalled. Instead of accepting the diagnosis of medical personnel, the couple turned to each other – and to God – for strength and reassurance.

“My husband and I had the most peace that came over us knowing that that was just not true. And it’s hard to explain,” she said.

Jacob eventually spent two and a half months at Scottish Rite Children’s Hospital, part of Children’s Healthcare of Atlanta. Following two weeks in pediatric intensive care, Jacob remained in the hospital for another two months in patient rehabilitation. As they watched their son struggle to survive, they were comforted not only by the outpouring of support from family and neighbors and their church, but also by messages they continued to receive from God.

“God is coming to our dreams, showing us Jacob is gonna be okay,” Brandi recalled. “And I know that probably some people think that might be a little out there, but it’s just, it’s a peace that you can’t even explain. We just know it and that is what kept us – is keeping us going – and focused on his recovery.” 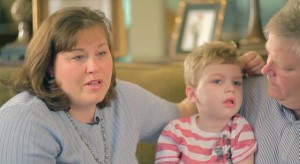 Two and a half years after the accident, the couple continues to provide around-the-clock care to Jacob. Having suffered a catastrophic and permanent brain injury, Jacob is currently unable to feed, clothe, bathe himself or to walk or visit the bathroom – but he is making progress each day and is responsive to sights and sounds. He responds with smiles, movement of his eyes and is able to make verbal noises.

In addition to taking care of Jacob full time, the couple has returned to some normalcy in their lives. Mike owns Helvey Realty, a real estate company. Having settled with insurance companies, the Helveys know their future will revolve around caring for their only child the rest of their lives.

They are also working with their attorneys to try to force a governmental recall of similar home elevator designs that led to Jacob’s injury – or at least a mandatory installation of a simple safety device that would have prevented their accident. Meanwhile, they hope reports of Jacob’s accident will spread to the countless thousands of owners of similarly designed homes – or vacation homes – elevators around the country and the world who are unsuspecting of the dangers that can happen when small children are exposed to the machinery.

Meanwhile, the Helveys work with Jacob each day and continue to pray. Says Brandi: “Because we know he will recover. I can’t explain it. But God has an end date. He knows when that day’s gonna be, and we see it.” 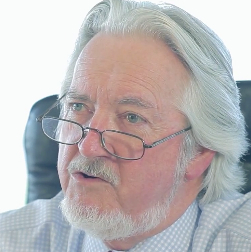 Next week in Moments: Keegan Federal

Next week in Moments: Keegan Federal, who put his law practice on hold to care for his daughter after a car accident and returned to develop a specialty in her injury.