Brer Rabbit statue restored, back on his perch at Uncle Remus Museum in Eatonton

Life is returning to normal at the Uncle Remus Museum in Eatonton, where the theft of a statue of Brer Rabbit stunned the community and where the restored statue has been replaced.

“We have some people waiting to come in,” museum hostess Millie Lane said Saturday morning. “Let me go help them and then I can talk.” 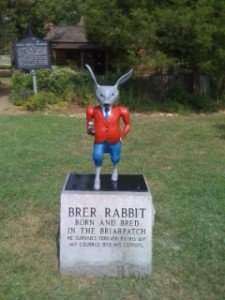 The restored Brer Rabbit statue, on its perch outside the Uncle Remus Museum in Eatonton. Credit: Putnam County Sheriff's Department

The Brer Rabbit statue is back on its pedestal in front of the museum in the town where Joel Chandler Harris was born and reared before moving to Atlanta to become a writer after the American Civil War. Harris lived in the Wren’s Nest home, in West End.

Putnam County Sheriff Howard Sills said the damaged statue was repaired by local artisans Mike Curtis and his wife, Cindy Curtis. They did the work at no charge, Sills said.

“Brer Rabbit … was put back on his perch in front of the museum and he is in better shape than he was prior to being stolen,” Sills said in an email.

“The rabbit was repaired by Mike Curtis and was repainted by Mike’s wife, Cindy,” Sills wrote. “They live here in Eatonton in one of our beautiful old Victorian homes.

“Mike is quite an artisan with iron and steel and sell his wares at the Scott Antique Market (south building) on the second weekend of every month,” Sills wrote. “They did the work on the statue free of charge.”

Sills recovered the statue after getting a hot tip about its whereabouts. He said the statue was hidden a few miles west of Eatonton, on Ga. 16, on land formerly owned by the sheriff’s relatives and where the sheriff had hunted as a young man. 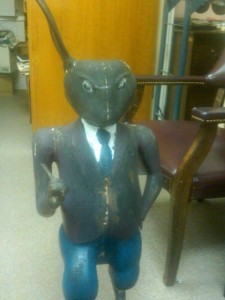 The damaged Brer Rabbit statue after its recovery from the woods. Credit: Putnam County Sheriff's Department

Sills has charged four teenaged men with felony theft in connection with the abduction of the statue. That charge is the most serious available in the case, and fulfills Sills vow to throw the book at any suspect who did not surrender.

All has ended well for the Brer Rabbit statue and those who visit the log cabin museum near downtown Eatonton. The damaged ear has been replaced, along with the smoking pipe – both of which had been broken off the statue during the theft.

“The people who did the iron work and painting did a beautiful job,” Lane said. “I think it was a prank to start with, until the statue got broken and they got scared. But the sheriff caught them.

“I knew that if anybody could find it,” he could. “I’ve known him since he was a little boy, and the statue was found on his great- great-grandfather’s property. I don’t know why the boys tried to hide it there.” 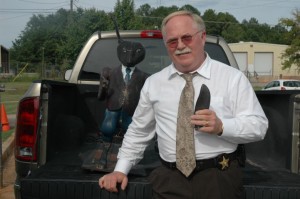