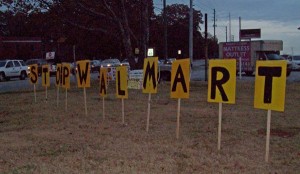 Even though Walmart will likely take over Suburban Plaza shopping center in Decatur, Brian Sherman still isn’t giving up.

Their unflagging commitment intrigued me because this intersection is part of my daily drive. I stopped at their protest, feeling cynical in the wake of news that the Atlanta Braves will move to Cobb County. Why should we regular people bother to stand up to power?

Why continue to fight Big Money, the Power, the Man, or whatever you call It when It always seems to get Its way? That was my question to Sherman, who at 70 has been fighting the fight since the 1960s.

“Because,” said Sherman rather defiantly, “We eventually win.” 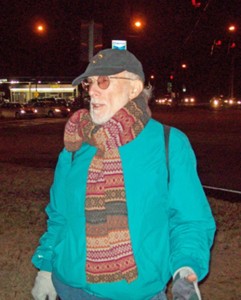 It was hard to see that from the six-way intersection of North Decatur and Medlock Roads and Lawrenceville Highway. On Halloween, a judge ruled the Walmart building permit was valid. Barring an appeal by Good Growth DeKalb, Suburban Plaza shopping center will be razed and the big box retail superstore will rise in its place.

That likelihood did not faze Sherman. The 70-year-old retired sociology professor seemed in it for the long haul, the really long haul. To him, the fight seemed not just about stopping this development, though the Decatur resident hopes he and his neighbors are successful.

For this lifelong lefty activist, it’s about forcing the company—which has been accused of paying its workers such low wages they have to go on public assistance, practicing predatory pricing, running smaller competitors out of business and bribing foreign officials —to change its ways, radically. However long it takes is almost beside the point.

“I do an anti-war protest every Friday. I believe the more we protest, the less likely this nation will get involved in military actions abroad,” said Sherman, who started challenging authority as a Cornell student in the late 1950s after enduring an involuntary year of ROTC. “[Stopping war] will take a long time. Not in my lifetime.”

For Sherman, who hails from Brooklyn, taking to the streets has been a lifelong passion. He grew up near Ebbets Field before the Dodgers bolted for greener paper pastures in Los Angeles. Asked for an opinion on the Braves impending trek for the suburbs for the same reason, Sherman demurred. Professional sports, he said, was corrupted a long time ago.

Sherman said he was first drawn to the spontaneous street movements for civil rights and against the Vietnam War in the 1960s. In 1968, while coming home from a Doors concert, Sherman recalled arriving to see Grand Central Station in chaos after baton-wielding police had started cracking heads and arresting demonstrators attending a “Yip-In,” an event that had begun peacefully.  Sherman said he immediately joined the rally as it moved outside and onto Fifth Avenue. 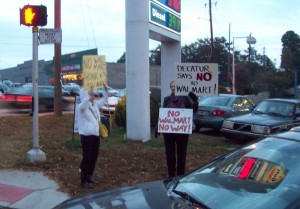 Good Growth DeKalb has held protests against Walmart at the intersection of North Decatur Road and Lawrenceville Highway.

Next protest just ahead

At WRFG, Sherman’s Monday noon show is part of the station’s daily “Progressive News Hour,” which broadcasts to a tiny island of like-minded listeners in a red state sea of conservatism. According to the WRFG website, Radio Free Activists provides “coverage of political and cultural actions in the metro Atlanta region with emphasis on making connections to world situations,” and “features interviews of anti-war and other activists.”

“Change doesn’t happen unless people are in the streets, whether it’s civil rights, workers’ rights or economic justice,” Sherman said. “We stopped a war in Vietnam. It was a losing war.” 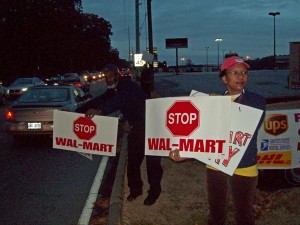 For example, Sherman said he believes opponents of Monsanto are close to winning the battle against the corporation, the genetically engineered food it produces and its monopolistic practices.

“I don’t know what’s going to happen with this fight [with Walmart]. We might win some concessions,” said Sherman. “It’s a long struggle to fight against the behemoth of Walmart and curb their abuses with wages and economic practices.”

“Maybe not in my lifetime,” said Sherman, echoing his commitment to keep the fight going.

He had to end the interview because his next protest was looming. He had to go to the state Capitol for a candlelight vigil for uninsured people who have died because of the decision by Georgia leaders to block Medicaid expansion, he and others believe.

As I hung up the phone I recalled the summation scene from, “The Verdict,” in which Paul  Newman plays a plaintiff’s attorney in a seemingly hopeless wrongful death case.

Newman ends up concluding, “If we would have faith in justice we must only believe in ourselves, and act with justice.”

For most of my adult life, it was my professional obligation to sit on the sidelines of big public arguments. Now I’m freer to speak my mind, but I find myself mostly complaining about the state of the world. Meeting Brian Sherman, I find myself challenged: Am I willing to fight seemingly hopeless and endless battles for the causes I believe most passionately about, for victories I will never see?