A $2.8 million renovation project approved Monday for the Brunswick port could help Caterpillar export machines to overseas markets from its future plant near Athens, which broke ground last week.

The Georgia Ports Authority approved an array of improvements to roads, bridges, staging areas, and rail loading and offloading areas at the Colonel’s Island terminal. The facility is designed to handle autos and machine parts.

Caterpillar’s new plant in Oconee County is the latest step in the company’s long-term strategy to grow its position in Asia’s booming construction industry. Caterpillar intends to focus its plants in Asia on meeting demand in Asia, and use two new plants in the U.S. to service markets in the Americas and Europe. 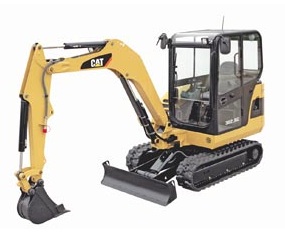 This mini hydraulic excavator will be manufactured at the new Caterpillar plant near Athens. Credit: Cat.com

The renovation at Brunswick could help Caterpillar serve clients in Europe and South America who buy the construction equipment – small tractors and mini excavators – that will be built near Athens.

As part of Caterpillar’s growth plan, it will retool a plant in Sagami, Japan to assemble high-tech components destined for Asia, according to the company’s past statements. Manufacturing lines for the small tractors and excavators now made in Sagami will be moved to new plants in Wujiang, China, and Oconee County, Georgia.

In addition, a new Caterpillar plant that’s to open this year in Victoria, Texas is to build the large excavators now manufactured at Catepillar’s plant in Akashi, Japan. The new plant in Texas will provide Catepillar with additional capacity as its Akashi plant to meet Asian demand, according to past company statements.

The Oconee County plant will provide complete mini hydraulic excavators for the North and South American markets. For the European market, the plant will ship partially assembled mini excavators to a facility in Europe for final assembly. The Wujiang plant will serve the Asian market.

Caterpillar has said that proximity to Georgia’s ports, and Charleston’s port, was a significant factor in its decision to locate in Oconee County. The company also had considered a site in Illinois and one in North Carolina, near the port of Wilmington.

An email obtained by the Associated Press from Caterpillar to Peoria County, Ill. laid out the high value the company placed on a Mid Atlantic site with good access to major ports: 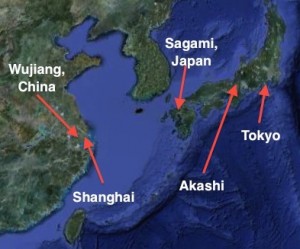 Caterpillar is retooling its plant in Japan and building a plant in China in hopes of growing its position in Asia. Credit: Google Earth, David Pendered

“We have defined a very tight search area that is primarily being driven by logistics, port access, and proximity to our division headquarters in Cary, North Carolina,” the email said of Caterpillar’s decision not to locate the new plant in Illinois.

It is unclear if funding for the Brunswick port renovation was included in the $75 million-plus economic incentive package Georgia offered Caterpillar to locate in the state. Much of that package was linked to job tax credits and a development grant.

Even without the Caterpillar plant, the Brunswick port is reporting an uptick in RORO cargo, or cargo which is rolled on and rolled off vessels. The port’s business in auto and machinery is up 10 percent through February, compared to the same period last year, the authority reported Monday.

“The Brunswick project is to serve the movement of machinery units and other business in the southeast region and to support continued growth,” Curtis Foltz, executive director of the ports authority, said in an email. “Caterpillar may also use both ports [Savannah and Brunswick] for the new manufacturing plant, once operational.”

Gov. Nathan Deal and Sen. Johnny Isakson were among the dignitaries who attended the March 16 groundbreaking for the Caterpillar plant in Oconee County.

“We look to a long and profitable partnership for all of us,” Deal said.

“As we enjoy the $200 million investment of Caterpillar, and the 1,400 jobs coming to Georgia, let’s thank the taxpayers who made the investment in the infrastructure that made Georgia the right place to be,” Isakson said.

Click here to see a video of the ceremony as recorded by athens.patch.com.