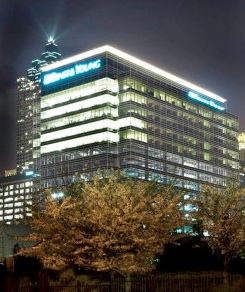 The energy assessment of 55 Allen Plaza shows the building, constructed in 2007, has 10 opportunities for upgrades, at a cost $247,000, which could be recovered in two years. Credit: atlantadowntown.com

Livable Buckhead was a founding partner of the city’s program and it formally began participating July 17. When it joined, Buckhead brought an amount of commercial space into Atlanta’s program that’s greater than the entire BBC program in Denver and Fort Worth, according to a statement from the city.

Livable Buckhead brought 41 buildings, which represent half the Buckhead market. The area faces a steep challenge in meeting the challenge because so many of the buildings were recently built and comply with various efficiency standards, according to Denise Starling, executive director of Livable Buckhead.

“Much of the Buckhead inventory has been built within the past 15 years, which means they have a much lower baseline for energy use,” Starling said in a statement. “That will make it challenging to meet the 20 percent reduction target by 2020, but I am confident that they are up to the challenge.

Atlanta’s progress toward meeting the goal has won kudos from the U.S. Department of Energy.

Seventy buildings in downtown Atlanta and Midtown have been enrolled in the BBC, according to a statement from Mayor Kasim Reed’s office. Of those buildings, 23 have been assessed and the findings show the cost of implementing each recommendation could be recovered within the first three years.

Atlanta has recognized 20 of the participants who have reached the goal of reducing either energy or water consumption by 20 percent since 2009.

That achievement is a step toward achieving the energy and water savings of at least 20 percent that Atlanta intends to reach in more than 40 million square feet of buildings, according to the city’s page on the DOE website. With the addition of the Buckhead properties, Atlanta’s program now covers 65 million square feet of commercial space, according to the statement from Reed’s office.

“The Atlanta Better Buildings Challenge is a tremendous example of what can be accomplished when businesses and government unite around a single goal,” Reed said in the statement. “The program’s expansion to Buckhead solidifies Atlanta’s position as a sustainability leader, and demonstrates the strength of our commitment to energy efficiency.”