The West End MARTA Station could be a window into the future.

There was a time when MARTA discouraged commercial activity within its stations.

But on Friday, Jan. 17, transit executives welcomed the official launch of the Fresh MARTA Market at the entrance of the West End station. 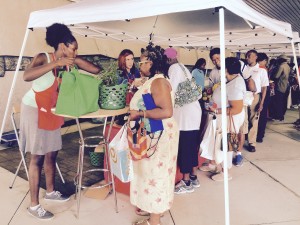 Keith Parker, MARTA’s CEO and general manager, heralded the market as a way of bringing “needed resources to an area that needs it.” The need? Fresh vegetables and fruits available for sale in an area that has sometimes been seen as a desert for healthy and fresh foods for sale.

Having a relationship between transit and fresh foods is a natural because they both promote healthy and sustainable communities. People who start riding transit often lose weight because they exercise more than if they were driving a car. People who eat more fresh fruit and vegetables also tend to be healthier.

It is all about making MARTA and its stations centers of activity for a community.

Atlanta City Councilwoman Cleta Winslow said that during a dry run a week earlier, the growers selling their goods had run out of produce – showing that the idea already was a winner. 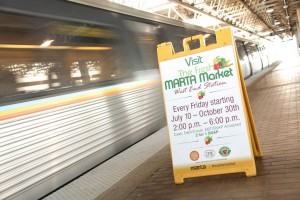 “Maybe it will encourage more people to use MARTA,” she said.

The West End Fresh MARTA Market came about through a two-year effort between the neighborhood, local urban farmers and Georgia Organics working with MARTA, according to Rob Johnson, vice president of community services for the Atlanta Community Food Bank.

Johnson said the goal is to create an oasis of fresh food in areas that have been food deserts.

More than 75 percent of West End residents and MARTA customers surveyed indicated they would likely purchase fresh produce at the station, if it were to be available.

According to MARTA, the pop-up market will operate outside the station each Friday from 2- 6 p.m. through October. It is being managed in partnership with Food Oasis, Community Farmers Market and the Southwest Atlanta Growers Cooperative.

These organizations have worked closely with West End residents to promote healthy, affordable and sustainable eating habits. Food Oasis is a program of the Atlanta Community Food Bank. 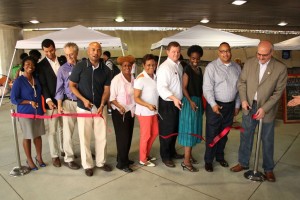 As Parker said, the MARTA Market represents a new day for the transit agency.

“For the first time since the Olympics, MARTA will have balanced its budget for the third year in a row,” Parker said – quickly adding that the agency has not had to raise transit fares for years.

Shoppers also have the opportunity to incorporate fitness into their market experience. Every third Friday of the month at 4 p.m., West End-based Red, Bike & Green will lead a community bike tour from the Fresh MARTA Market to five local farms. The tour costs $10 and is open to cyclists of all skill levels. 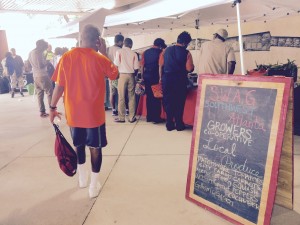 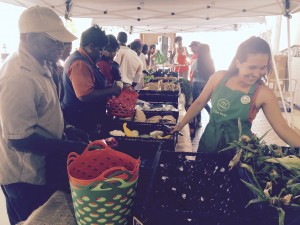 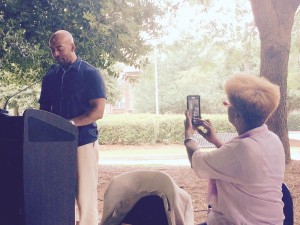