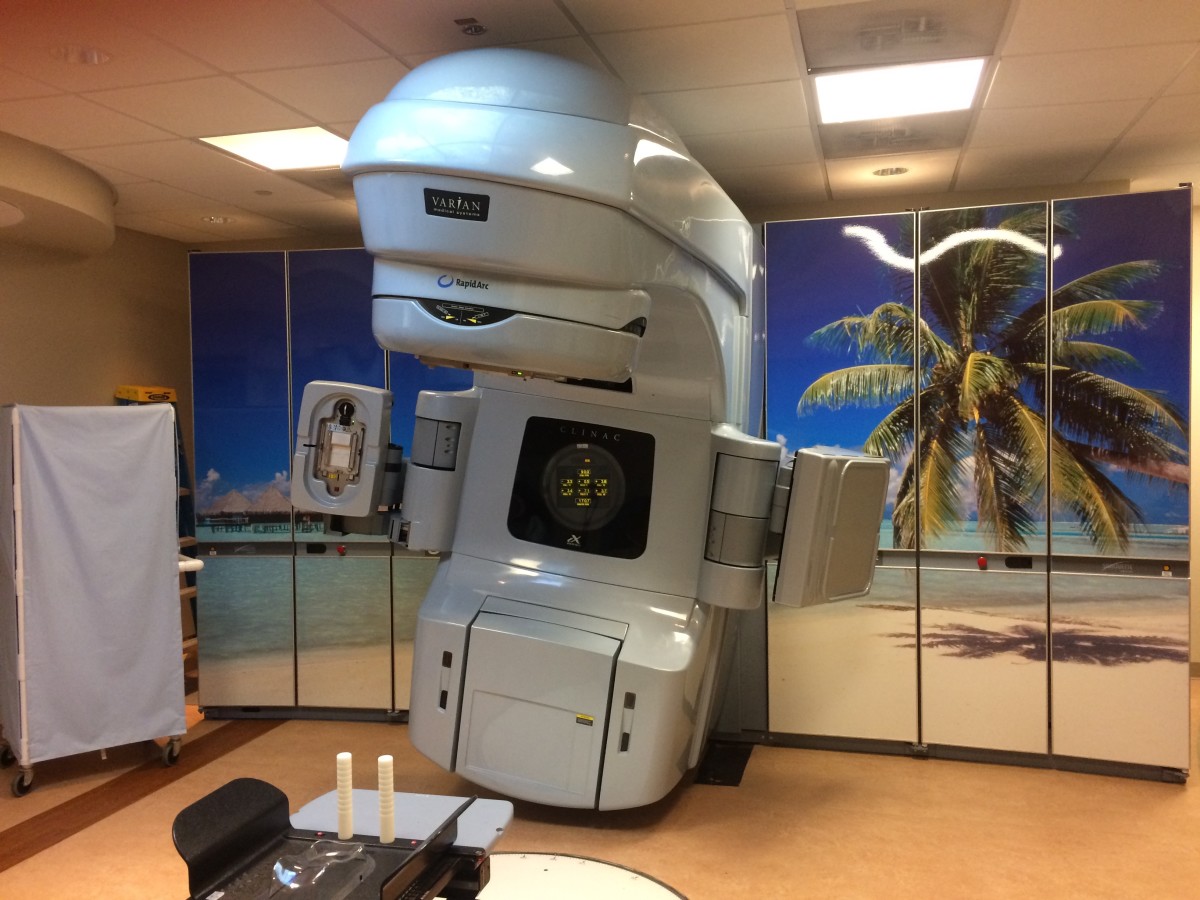 As I finished my radiation treatment at Piedmont West this morning, I took a picture of the machine that's been zapping me for the past month. Modern medicine never ceases to amaze me (Photo by Maria Saporta)
Share196
Tweet
Share3
Pin
Pocket
WhatsApp
Buffer
Email
Reddit
199 Shares

After nearly a month of radiation treatments five days a week, I’m happy to say that today (Monday) was my last day.

It is one more step along the way towards my recovery from breast cancer.

When I wrote my first column about having breast cancer, I promised I would keep folks informed at key steps along the way, The response I received from that column was overwhelming, inspiring and heartfelt.

So first, I want to thank all of you who have sent over messages of support – whether it was emails, texts, phone calls, flowers, visits and even cookies. It certainly felt the love and support, and it made the tough days easier to handle. 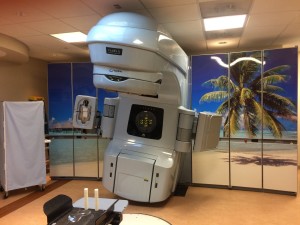 As I finished my radiation treatment at Piedmont West this morning, I took a picture of the machine that’s been zapping me for the past month. Modern medicine never ceases to amaze me (Photo by Maria Saporta)

A brief recap. I was diagnosed with breast cancer in October. It was a relatively small lump, but it had spread to at least one lymph node. I had a lumpectomy and 11 lymph nodes removed, of which two were positive. Because my breast cancer was not that aggressive, my breast surgeon, Dr. William Barber, advised me to have an Oncotype DX test to see if I would benefit from having chemo. The genetic test, which my insurance ending up covering, showed that chemo would not decrease my chances of recurrence.

So, I feel as though I have gotten off easy – especially when I hear of all the tremendous challenges the sisterhood has to go through with months of chemo and more than six weeks of radiation. The next step will be to meet with my oncologist to determine which hormone blocker I will take for the next five years.

Because I decided a couple of months ago to go public and write about my experiences, I have been fortunate to hear from dozens if not hundreds of women who have had their own experiences with breast cancer as well as men who either had it themselves or lived through it with a loved one.

A couple of thoughts. First, every case is different. And listening to people’s stories, I found that everyone has to make a personal decision about how to respond to their particular cancer diagnosis.

Every story I have heard actually made me feel optimistic about the whole process and the future of cancer treatment. So many women who were treated more aggressively 10 or 15 years ago are models of strength and survival. 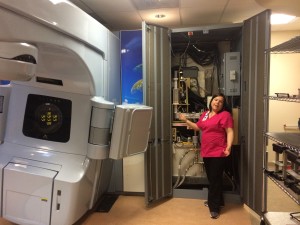 Radiation therapist Kelly opened one of the panels to show the intricate technology and wiring that goes into the radiation machine.I feel fortunate to have received such great care from the entire medical team at Piedmont (Photo by Maria Saporta)

Although women are still dying of breast cancer, my anecdotal evidence is that they are in the minority – and if we continue to practice early diagnosis and state-of-the-art treatment – we will see that percentage continue to decrease.

The most distressing conversations I have had, however, were with women – several of them friends of mine – who have hidden the fact that they had breast cancer. Most told me it was for professional reasons. They didn’t want people to view them differently or think they were unable to meet their work obligations during treatment.

Whether we want to acknowledge it or not, a stigma does exist whenever someone is going through a medical challenge.

But if we can tell people in our world what we’re going through and then prove that we are still capable of functioning and performing during our treatment, can’t we help remove that stigma?

Let’s accept we are only human. We do get sick – be it cancer or heart disease or mental illness or any of the other health issues that are part of life’s journey. Once we understand it is normal to not always be normal, then we can be more accepting of each other.

Most importantly, we can be more open, we also can better support each other when the need is there – whether it’s doing the simple daily chores or making sure people are getting the treatment they need.

And I have been blessed by having so many friends and family members offer their help. Because I’ve had it so easy, I really haven’t needed to call on folks that often. But it’s been so reassuring to know that if I needed help, there were so many people willing to offer a helping hand.

Lastly, I have noticed that I’ve had less energy these past few weeks as I’ve been undergoing radiation. I’m told that is to be expected and that I should be getting back to my normal self in the next several weeks.

When I was complaining about feeling tired, my best friend, Francie – a nurse and a healing soul, told me to just accept what my body was telling me. She encouraged me to rest and let my body recover.

As you see, I am one of the lucky ones. My experience with cancer so far has opened my eyes of the good that is all around us.

Previous Article
Wit or wisdom?
Next Article
Calling out the enablers of Malheur and Flint