Candler Park resident William Read has a unique hobby. For years, he’s been collecting golf balls. So many in fact, that he crafted a pyramid that rivals the largest one in the Guinness Book of World Records. 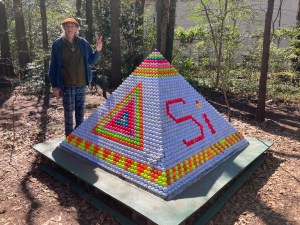 Read has collected around 41,000 golf balls in total. (Photo courtesy of William Read.)

The pyramid’s inception was rather serendipitous. Several years ago Read, a longtime resident and retired from Georgia State University, began collecting stray golf balls during his walks around the neighborhood or local golf course. Although he didn’t have a plan for them, he knew he wanted to create an art project using the found materials.

One day, Read saw an article about a new record for the largest golf ball pyramid in the world — 16,206 golf balls in Texas. Curious about how many he’d collected on his walks, Read counted and was surprised to discover that he’d accumulated around 7,000 strays.

“That’s without even trying. I wondered what would happen if I really went looking for them, maybe I could get as many as 16,000 balls,” he said. “So I really started looking. I began keeping records to see how many balls I’m finding each month, and I discovered I was finding 500 or 600.”

Read began to dedicate up to 12 hours a week looking for discarded golf balls, and his spouse, Edi Kelman, bought him a special retrieval tool that extends 15 feet for hard-to-reach places.

One weekend in 2018, Read, Kelman and some of their neighbors tried constructing a temporary pyramid but didn’t quite reach their goal.

“We tried to do a pyramid over a weekend, constructing it on Saturday and deconstructing it on Sunday,” Read said. “It was a noble attempt but we didn’t have the engineering [perfected] so the balls shifted around. We placed about 15,000 balls but we couldn’t get any higher than that.” 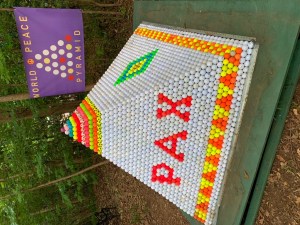 The pyramid is held together by gravity and friction. (Photo by Kelly Jordan.)

The 2,242-pound ode to global peace was built by the community and for the community, and it’s fitting that the Candler Park resident of 43 years designed a symbol of peace while building camaraderie on a local level.

“It provided an opportunity for people to meet and greet each other around a positive activity,” Read said. “There was an eight-year-old — he was our youngest volunteer — and he talked his mother into bringing him to the [build days.] He placed the final ball. He got a real kick out of it, and they even included a pyramid photo on their Christmas card.”

The 2022 World Peace Pyramid opened to the community on the first day of spring, March 20. There are periodic windows for public viewing, but the area is generally closed to the public.

Read has hopes of receiving official recognition as the largest golf ball pyramid in the world, but needs to sift through paperwork about “half an inch thick” for certification.

Since completing the project, Read still doesn’t let a golf ball go uncollected — with about 19,000 extra balls in storage.

“I don’t have a firm plan for the remaining 19,000, but I’m continuing to collect them,” he said. “There’s part of me that thinks if I could build a pyramid of 50,000 golf balls, that would be a more significant number. I may also end up donating them to the Candler Park Golf Course. It might even be part of my estate sale.”

Ultimately, Read hopes that the community pyramid uplifts visitors, reminding them of the potential for peace.

“I have no illusions that world peace is going to happen because of this peace pyramid,” Read said. “But at the same time, there’s nothing to it but to do it. World peace certainly is doable. Individuals and individual projects can have an impact. In today’s social media, who knows what’s gonna go viral and have an impact. Maybe we can get some positive stuff going viral, instead of lots of negative stuff.”