Former President Jimmy Carter and Bernice King, CEO of the Martin Luther King Jr. Center for Nonviolent Social Change, invited several dozen civic leaders to the Carter Presidential Center as a kick-off event for the 50th anniversary of the March on Washington. The actual anniversary will be Aug. 28.

The event also gave a public boost to the Sunday Supper movement — an effort being launched by Points of Light, with support from Target, to get people of diverse backgrounds to come together around the dinner table to exchange ideas. 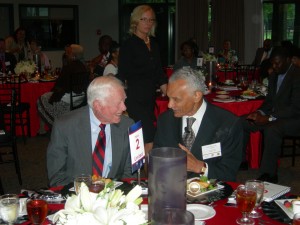 As she recited words from her father’s famous “I Have a Dream” speech, Bernice King told the gathering: “We come together as friends, as colleagues and neighbors, and we come together to create the beloved community.”

She then said the most important room in her home was dining room where the family would gather around the table.

“Food has a way of bringing people together of different backgrounds,” King said. “Food and music, they are the great neutralizer.”

Laysha Ward, Target’s president of the community relations, explained that sponsoring the Sunday Supper movement was an extension to advice that Coretta Scott King once gave her about leadership.

“Surround yourself with people who are different from you and who think differently from you,” Ward quoted the late Mrs. King. 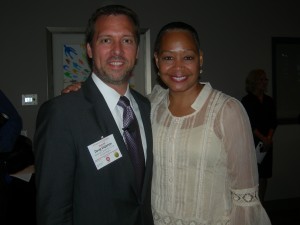 Doug Shipman of the Center for Civil and Human Rights with Lisa Border of the Coca-Cola Co.

When President Carter stood up to speak, he recounted an often-told story about how he never would have become president had it not been for Martin Luther King Jr. Although he never met the civil rights leader, three years after King was assassinated, Carter was elected governor. During his inaugural address, Carter said: “The time for racial discrimination  in Georgia is over.”

That’s how he won the support of King’s father — Daddy King, Andrew Young, Mrs. King, Benjamin Mays and so many other civil rights leaders, which gave him national credibility. And when he was elected president, those leaders always had an open door to his office and greatly influenced his administration. 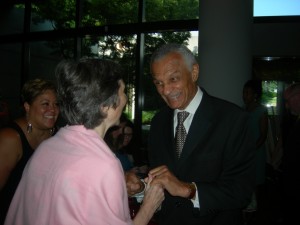 “The foundation of our foreign policy was human rights, and that came directly from your father,” Carter told Bernice King.

Another touching moment of the evening was when Carter, at the time that he received the Nobel Peace Prize, remembered having a conversation with South African leader Nelson Mandela.

The chosen topic for this Sunday Supper was education. King said that she was distressed to find out that in the Atlanta Public Schools, only 52 percent of the students graduate from high school. 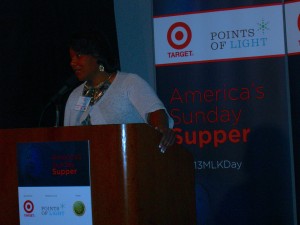 The most vulnerable is the young African-American male.

“It’s very clear that if you are not educated, you don’t really survive in society,” said C.T. Vivian, a long-time civil rights leader who is president of the Southern Christian Leadership Conference and who just this week was named a Presidential Medal of Freedom honoree. “When you drop out of high school, within two or three years you are going to be in prison.”

Vivian said the real cause is poverty, but now people prefer to talk about the middle class rather than about the poor. “What do we do with poverty?” Vivian asked. “What’s wrong with a culture that creates poverty?”

The evening, however, ended on a high note.

Zaqary Asuamah, an eight-year-old student, stood before the room full of adults and flawlessly recited a long passage of the “I Have a Dream” speech.

But before he introduced the speech with the following comments:

“I will recite a very important speech that changed many people’s lives,” Asuamah said, “and it still has the potential to change more.”

And so one Sunday Supper came to a close. 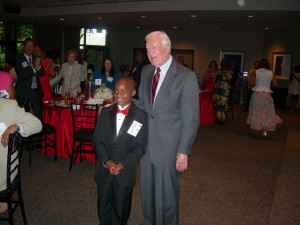