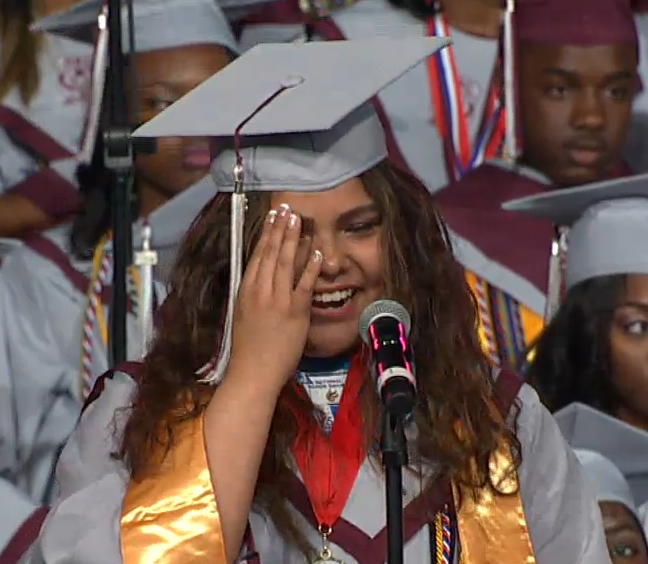 An emotional Vanessa Badillo-Rodriguez spoke Friday as valedictorian of Carver School of the Arts. 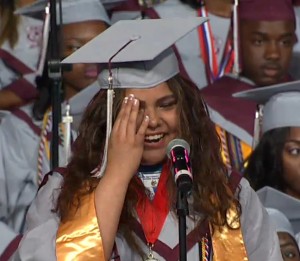 An emotional Vanessa Badillo-Rodriguez spoke Friday as valedictorian of Carver School of the Arts.

Graduation came last weekend for the city of Atlanta’s public high schools, which after the test cheating trial, are working hard to restore trust. They need voices like Vanessa Badillo-Rodriguez, who spoke emotionally and eloquently as valedictorian of Carver School of the Arts.

She recounted an path of unlikely achievement made possible by the many people who believed in her even when she wasn’t sure of herself. She called them her giants, and her tearful speech points to the allies we all need when we dream big, and shows what a difference one person can make by going beyond mere duty.

This circle launched Vanessa beyond good grades to become a leader. She became interested in health care, and volunteered as a translator at a clinic near Carver, helping pediatricians communicate and help serve patients. Elected president of the senior class, she developed a free ACT prep program to help students improve their entrance test scores.

Their belief and her hard work resulted in a full scholarship from Georgia Tech, only five miles north of her high school and a new sponsor of Atlanta’s top public high school graduates. Vanessa is among the first crop of APS valedictorians and salutatorians seizing Tech’s offer of a four-year tuition scholarship.

A free college education is a giant gift honoring a young woman, her faith and her circle of giants.

“God doesn’t give you people you want—he gives you people you need, to help you, to guide you, to lead you, to love you and to make you the person you’re meant to be,” she told the audience (33:00 mark) Friday evening at the Georgia World Congress Center. “He gave me the most important and unbreakable family in the world.” 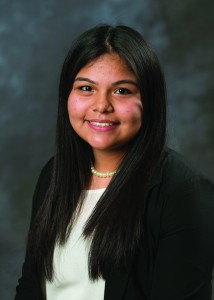 “Thirteen years ago I would have never imagined being as accomplished as I am today,” Vanessa said. “I never really thought I wouldn’t go to college because I didn’t want to; I just never thought it was possible. Until my mom made sure I erased all that nonsense from that small brain of mine.”

Her mom taught by example. “Even if I had to work morning and afternoon shifts, [you] will be going to college,” she told Vanessa.

“She was so true and so sure of me, I felt I had something to live for, someone I must not disappoint,” Vanessa said. “She forced me to discover my calling and she was the beginning of the giants in my life.”

In Spanish, Vanessa thanked her mom (Mami) and Papi, who she considers her father. In English, she praised her brother who “picked me up when I was weak. He made me laugh when I was afraid and he installed Microsoft in our computer when I was too foolish to understand the instructions.”

“Thank you for always pulling me to the right road when you felt like I was leaning to the wrong side,” she said. “Thank you for visiting me in the hospital when I was recovering from pneumonia, and eating my green vegetables when I thought they were disgusting. I appreciate you sacrificing the Saturday morning sleep to drive me to the train station to ACT practice and to Saturday school every weekend.”

Her brother, she said, is “the other giant in my family circle.”

But what about the one adult who is going to take a deep interest in seeing that a student like Vanessa rises to her potential? 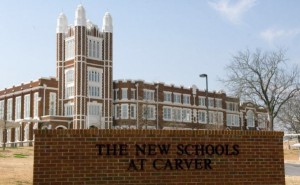 Carver School of the Arts is part of a high school complex that includes early college, technology, and health science and research.

At the start of Vanessa’s junior year, Aina Thompson joined the Carver faculty. An English major from Howard University, she was new to teaching. She quickly made a big difference.

“You have been a mentor giant in my life since I first met you,” Vanessa said to Thompson in her speech. “No one had ever done what you did for me. I mean, who gives up her New Year’s Eve to help a student finish her college essays? You took the responsibility to take me to all of my college interviews even as far as Boston, Massachusetts. Your energy and will pushed me to believe in myself.

“A couple of months ago you said to me, ‘God has you.’ And he does because if he didn’t, you wouldn’t be in my life right now,” Vanessa added. “You are that special person I needed to take a giant step.”

Perhaps Vanessa’s greatest source of tenacity was absent from her moment in the spotlight, and as she reached this point in her speech, her pauses became longer as she coped with her emotions.

“They say the hardest part of losing someone is saying goodbye, but in my case the hardest part is learning to live without them and always trying to fill the empty space left inside your heart when they are gone,” she said. “Sixteen and a half years ago, I lost my father, and although he is not present in my life today, the memory of my father has always pushed me to achieve more than what is expected of me.

“I have been told how strong and loving he was, and there is not a day that goes by that I didn’t wish I could have known him,” she said. “But I know he is my giant with wings that constantly circles over me. In memory of my father, I refuse to be anything less than successful.”

At Tech, a goal to give back 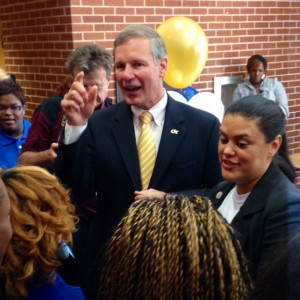 Less than a year later, Vanessa was holding one of those black and gold tickets.

“I plan to major in biochemistry and attend medical school to become a pediatrician in oncology,” she said as valedictorian. “I decided to devote my medical career to children with cancer to give them support love and care. Their future does not have to seem hopeless. And so in spite of all my obstacles in my life, I stand before you as a changed person who is inspired to do great things because of my giants.

“I challenge my classmates to find your one gift that you do better than anyone else—your calling,” she said, advice that works for all ages. “Continue to follow your dreams, and once you do it, together we will change the world.”