In a cautious time for legislature, even the pork gets postponed 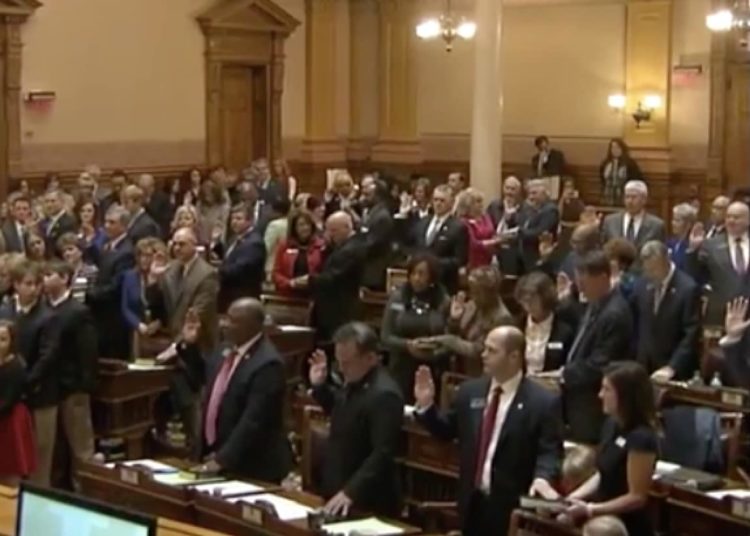 Georgia's senators took their oath of office Monday as they look ahead to a session filled with competing directives from a divided electorate. Credit: legis.ga.gov

Could it be an omen of sorts, when a bogus snow storm causes the postponement of one of the state’s most time-honored celebrations of pork, in all its manifestations?

Faced with dire warnings of winter weather, the Georgia Food Bank Association chose to reschedule the annual Wild Hog Supper, traditionally held the night before the legislative session begins, to a date to be announced. 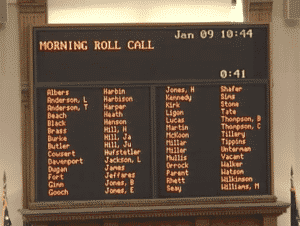 Depending how things shake out in Washington, Georgia senators may not have a lot to vote on as Congress and the new president make policy decisions affecting states. Otherwise, senators are grappling with Georgia voters deeply split on issues including gambling and health care. Credit: legis.ga.gov

For legislators, the AJC’s pre-legislative poll sounds a similar note of caution. Underneath a picture of voters longing for common-sense government lies a tricky electorate that will not be easy to satisfy.

The largest share of voters, 29 percent, saw the economy and jobs as the biggest issue facing the state, but the next largest, 25 percent, were grouped under the general category of “something else.” Forty-four percent of voters don’t want the religious liberty bill brought up again, but 40 percent of voters do. That’s not an electorate that’s especially easy to read.

This sampling of voters was thumbs down on guns on campus and thumbs up on casino gambling. But by far the most troubling number for Republican lawmakers must be that 75 percent of those surveyed, including 57 percent of Republican voters, favor expanding Medicaid in the state. That puts them on a collision course with a legislature and a U.S. Congress bent on bringing Obamacare to a decisive end.

Lt. Gov. Casey Cagle has announced the formation of a Senate Health Care Reform Task Force, dedicated to repealing and replacing ObamaCare. They have a big job ahead, but no senator will be quite as crucial to what happens in Georgia as one who served in that position more than a decade ago: Tom Price, President-elect Donald Trump’s choice to be Health and Human Services Secretary.

There’s been a lot of focus on the discomfort in Congress over how to carry out the uprooting of Obamacare, but the consequences are even closer to state legislatures, which over the coming year will be grappling with budgetary questions that hinge on what parts of the Affordable Care Act survive, and what replaces it. Every can that gets kicked in Washington will result in spasms of suspense at the state level. Letting the current system collapse by defunding it, simply to clear the way forward, would have an immediate political effect on the lives of a lot of state legislators. 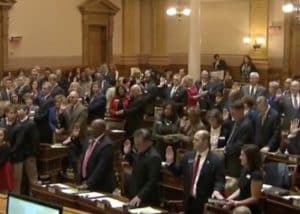 Georgia’s senators took their oath of office Monday as they look ahead to a session filled with competing directives from a divided electorate. Credit: legis.ga.gov

This week’s latest is that Sen. Rand Paul claims Trump told him he wouldn’t support such a strategy, and instead wants to repeal the ACA and replace it at one time. It looks like there will be a lot of twists and turns in this story, and Price will be right in the middle of it.

None of the big questions about what happens after the ACA, and what happens to Medicare and Medicaid, are likely to have been settled by the time this year’s session comes to a close, which should add a special note of caution to this year’s proceedings.

In the early days of the Trump era, there are many reasons to tread carefully. Georgia is a state where many have thrived in the global marketplace. How will Trump’s trade policies affect them?

Probably closer to the minds of a lot of lawmakers is how much to follow the Trump playbook on questions like immigration and crime. How much will the tone of the Trump campaign affect politics at the state level?

Add to these the things lawmakers should always be cautious about. Speaking to his colleagues Monday, Senate president pro tem David Shafer warned those less experienced not to believe everything they heard under the Golden Dome. In 15 years he’d gained 50 pounds, he said. Yet every year he’d encounter “people who have told me how good I looked, and asked me how much weight I’d lost, and asked me what my secret was.”

In this place, he said, “don’t look for love.” Timely words in any session.