The Census count is complete and one early result shows that fewer than two-thirds of Georgians took the initiative to self-respond to the Census questionnaire. 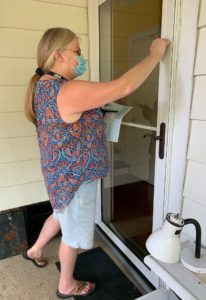 Census workers who knocked on doors gathered information used to complete about one in three of Census reports in Georgia. Credit: Kelly Jordan

The count in Georgia, and across the nation, would not be complete without the Census enumerators who went door to door to collect data. Georgia ranked 38th in the nation in terms of self-responses, with a response rate of 62.9 percent. Minnesota ranked No. 1, at 75.1 percent; Alaska came in dead last among states, at 54.7 percent.

The door-to-door work was complicated this year by situations beyond the pandemic.

Fires in the West had to be accommodated, as did storms in the Atlantic and Gulf states. Civil disturbances in several cities hindered the count, and the entire process fot off to a slow start because the Census started hiring enumerators before the pandemic had thrown millions out of work – and potentially searching for a temporary job.

By the end of the counting process, the Census hired a team that would reach 528,500 individuals to work temporary Census jobs, Tim Olson, the Census’ associate director for field operations, said in an Oct. 21 conference call with reporters, according to a transcript.

The enumerators visited more than 60 million addresses nationwide. That figure includes 6 million households that submitted a self-response after an enumerator had knocked on the door and left a notice inviting occupants to self-respond, said Al Fortenot, associate director for decennial programs with the Census. 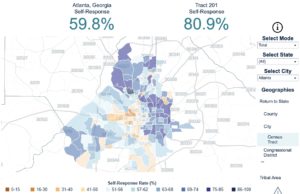 The color-coded map shows self-response rates to the Census in the City of Atlanta. Credit: Census

The information these workers helped gather will determine a tremendous array of issues that affect everyday life – from the number of congressional seats awarded to each state, to federal funding for sidewalk improvements in towns across the country, to federally funded lunches for children in low-income households.

The process of analyzing that data has started, according to a statement from Census Director Steven Dillingham:

Still, the work is not expected to be completed and delivered to President Trump by a Dec. 31 deadline. The Census doesn’t expect to complete and deliver to President Trump the apportionment report the president is required to deliver to Congress the first week in January. The report states the population in each state and the number of House seats to which each state is entitled. Early to mid January is a more likely delivery date.

Meanwhile, the Supreme Court is slated to hear arguments this month in a case involving Trump’s order that undocumented immigrants be excluded from the Census count used to apportion congressional seats.