By Mark Meltzer and Maria Saporta
As published in the Atlanta Business Chronicle on June 10, 2016

Nearly two years after it became the newest in Atlanta’s growing cluster of tourism attractions, the Center for Civil and Human Rights isn’t where it wants to be.

The $80 million facility drew about 200,000 paid attendees in 2015 — about half the number it had initially projected — said CEO Derreck Kayongo.

The attendance figures are the first ever reported by the center, which opened on June 23, 2014.

“It’s a startup. Startups are very interesting,” said Kayongo, who took over last December from founding CEO Doug Shipman. “They start out with a generous forecast of what they’re going to do.”

So far, the center isn’t meeting that forecast. 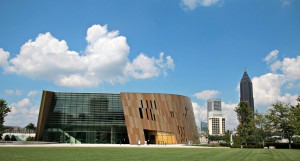 Kayongo said total revenue for 2015 was $5.5 million, with $2.6 million from admissions, events and retail and $2.9 million in cash received as donations and gifts. Some of that was from two large annual fundraisers, which brought in $600,000 each.

The center had about $3 million in expenses in 2015, and paid another $1.95 million to PNC Bank to repay half of a $3 million working capital loan.

Two of the key players who helped get the center built, former Atlanta Mayor Shirley Franklin and A.J. Robinson, president of the downtown advocacy group Central Atlanta Progess, say the center can sustain itself with those numbers, even if it would like to be doing better.

“The center is sustainable, particularly because we don’t really have any debt,” said Robinson. “Coming out of real estate, [I know that] you can have an incredibly well-performing asset but if you have a lot of debt, you never can get out of it.”

He called the center’s $1.5 million in debt “extremely manageable” and added, “Even if we maintain a 200,000-range attendance level, we’re fine.”

Added Franklin, who chairs the center’s board, “There’s little doubt the center will sustain itself over time. That doesn’t mean there won’t be some bumpy times.”

The center has been heralded for its design, and for its ability to tell with great emotion the story of the civil rights movement in Atlanta and throughout the Southeast in the 1950s and 1960s. It also tells the story of the human rights struggle around the world, from its rogues gallery of historical villains, such as Adolf Hitler and Idi Amin, to the human rights issues of today.

“I think it’s extremely well done, but it’s a different purchase for the consumer than to go have fun at the Aquarium or the College Football Hall of Fame.”

Robinson agrees that the sober subject matter can get in the way of attracting visitors.

“It’s a hard subject,” he said “It’s not about having fun. It’s educational and it grabs people and some people don’t want to be grabbed.”

“I think we do a very good job of telling a multi-generational, multi-racial, multi-ethnic, multi-gender story,” she said.

The center faces several challenges as it looks to grow its audience. First, there’s the competition from nearby attractions such as the Georgia Aquarium, The World of Coca-Cola, the CNN studio tour, the Children’s Museum of Atlanta and the College Football Hall of Fame. Second, the Center for Civil Rights has limited space. It has no space for rotating exhibits, like at the High Museum of Art.

Robinson said the center has to get bigger, with a rotating exhibit space, space for performances, and improve the human rights part of the center.

“We have to make it more dynamic,” he said.

Franklin says the original plans called for a rotating exhibit space and an auditorium, but the founders couldn’t afford to include them in the $80 million facility.

“The plan still includes that,” she said. “It’s just not the plan that we built.”

Bernhardt said rotating exhibits give people a reason to come back.

“It’s easy to say ‘Been there, done that,’ whereas Six Flags has a new ride every year or two, and the High Museum has special exhibits,” he said.

Another challenge is the center’s limited marketing budget, Bernhardt said.

“There’s a reason that companies advertise — because it reminds people, makes them aware and top of mind — and with a tiny budget they’re much more constrained in their ability to do that,” he said. “If the Alliance Theatre didn’t advertise a lot, they’d have a fraction of the attendance they do.”

His goals include lifting attendance by children from the current 50,000 to 60,000 range up to 100,000 kids annually. He wants corporations to underwrite children’s admission.

Kayongo also wants to do more diversity and inclusion training for companies and police departments.

Franklin also wants to see it partner more with other institutions, like the William Breman Jewish Heritage Museum, the Atlanta History Center and the Birmingham Civil Rights Institute.

“We need to find new relationships with institutions in Atlanta and Georgia and throughout the South,” she said.

Less clear is whether the center should put more emphasis on its civil rights or its human rights offerings. Atlanta is the birthplace of the civil rights movement. But it also has a unique collection of globally connected institutions, among them The Carter Center, CARE, the Centers for Disease Control and Prevention and The Coca-Cola Co., which donated the land on which the center was built.

“I don’t think I anticipated the positive response for human rights issues,” said Franklin. “It’s filling a void. One of the great potentials of the Center is to be a strong partner on the dialogue on human rights.”

Kayongo, a native of Uganda who escaped the rule of Idi Amin, is the embodiment of the human rights story. But he’s also spent years here and understands the city’s civil rights heritage.

Thomas K. Glenn II, whose family’s $6 million gift was the largest private donation to the Center, said it’s a great venue for all kinds of human rights discussions.

“Our history is that we stand for human rights,” said Glenn, president of the Hilda and Wilbur Glenn Family Foundation. “Derreck understands and appreciates that. A lot is going on right now in the area of human rights. Religious bigotry. There’s an increase of anti-Semitism on the campuses of Southern universities. That’s an area that falls squarely in the Center’s mission.”

But Bernhardt isn’t sure that putting more effort into marketing the human rights side of the center is the right way to go.

“I would say I don’t think they’ve even begun to penetrate the demand for civil rights, which is huge, and with limited budget, I wouldn’t try to go after two different markets,” he said. “I would focus my resources on one market.”

How will the center measure success going forward?

Franklin said it has to steadily grow attendance, which may come from better marketing, a larger marketing budget, and from all of the things the center’s leaders have learned over the past two years. So far in 2016, attendance is trending up 5 percent to 6 percent, Kayongo said.

“The way I look at this project, it took seven to eight years to come together and get it built. It’s probably going to take at least that to meet the potential of what it can be.”

Previous Article
Control of Atlanta’s streetcars emerges in talks of $2.5 billion in transit funding
Next Article
“High outside” by Kelly Jordan #2