A new report on equity in Atlanta’s philanthropic community provides both a snapshot of which agencies received COVID relief funding, and a conversation with Black women who lead organizations that, as a group, the study showed as receiving 18% of the $18 million in local COVID grant funds.

The Center for Civic Innovation, an Atlanta-based tax-exempt organization, reported on Oct. 2 results of its review of the allocation of about $18 million in a regional fund for COVID relief. Two local organizations determined recipients, the Community Foundation of Greater Atlanta and the United Way of Greater Atlanta.

The analysis arrives as the pandemic continues, and with it ongoing efforts to address its impact. Gov. Brian Kemp on Sept. 30 ordered the Public Health State of Emergency extended through Nov. 9 – meaning it will be in place on election day, Nov. 3. President Trump was diagnosed with COVID19 and on Sunday remained at Walter Reed National Military Medical Center.

The Center for Civic Innovation examined two categories of COVID relief funding – one closed, handled in private by the two organizations; one open to applicants.

The center’s mission is, according to its latest available tax return, 2017, “to push Atlanta to be a smart, equitable and engaged city by investing in community-driven ideas, supporting social enterprises and engaging people in dialogue and action.”

The report noted that the Community Foundation and United Way facilitated the review. The report states that this document represents the beginning of an effort that is to become an extended review of equity within metro Atlanta’s philanthropic programs. The executive summary’s first paragraph states:

Highlights of the report show that: 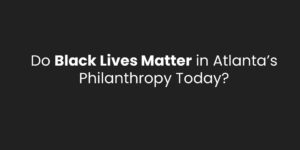 The center released the report and conducted a panel discussion of its findings in a virtual meeting that remains posted on the center’s Facebook page.

The center’s executive director, Rohit Malhotra, presented an overview of the report. Kyle Kessler, the center’s director of policy and research, presented the analysis and findings.

The moderators were Sagdrina Jalal, the center’s senior director for programs and partnerships, and Odetta MacLeish White, of Transformation Alliance. The panelists were:

Jalal started a conversation that would last almost two hours with this question:

Note to readers: The presentation remains available on the Center for Civic Innovation’s Facebook page.

Previous Article
Atlanta, we have a housing problem. It’s time more of us cared
Next Article
‘The Glorias’ – movie about Gloria Steinem is ‘an unmitigated disaster’