Published in the Atlanta Business Chronicle on Friday, March 8, 2013

The Arthur M. Blank Family Foundation is increasing its donation to the National Center for Civil and Human Rights by $1.5 million to a total of $2.5 million.

As a result, the Civil Rights Gallery wing of the attraction will be named after the Blank Family Foundation.

It is just one of several major new developments that are falling into place for the attraction that is set to open on Memorial Day 2014 on the same block as the Georgia Aquarium and the World of Coca-Cola.

The Center now has raised all the money it needs to build and open the first phase of the attraction debt-free — $76 million. That includes $4.6 million toward a planned$5 million endowment as well as$13.6 million for acquisitions, including $11.5 million to help pay for the special collection of Martin Luther King Jr.’s papers.

“We’ve got a lot of momentum,” said Doug Shipman, president and CEO of the Center. “We are moving forward on Phase One, and we have between now and next May to continue to raise money. We will be able to launch the Center with dedicated funds to fulfill our mission for education and programming.”

Shipman, who will announce several developments at the Rotary Club of Atlanta on March 11, shared a preview with Atlanta Business Chronicle.

PNC Bank and Invest Atlanta closed on $24 million in federal New Market Tax Credits at the end of February, providing a key financial instrument critical to getting the project out of the ground. 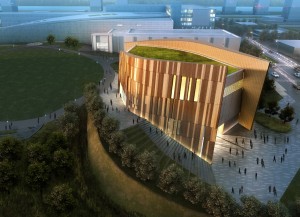 Phase One of the National Center for Civil and Human Rights

The Coca-Cola Foundation is providing a $500,000 cash gift on top of the company’s donation of land for the Center — which has been estimated to be valued between $8 million and $11 million.

Construction crews began working on the site on March 4, keeping the project on track to open on schedule.

The Women’s Solidarity Society also has pledged to donate $1 million, and it has reached $675,000 of that goal.

At the request of the city of Atlanta, the Center will be adding a water feature along Ivan Allen Boulevard, which is expected to cost $750,000. A separate fundraising effort is under way for the water feature. The Center’s plans already included a cistern to capture rainwater that now will be used for that attraction.

A couple of years ago, the Center had to scale back its plans when fundraising struggled during the economic slowdown. But now both existing and new donors are pledging support for the attraction.

“The Center for Civil and Human Rights will be one of Atlanta’s premier attractions,” said Arthur Blank, founder and chairman of The Arthur M. Blank Family Foundation, through a spokeswoman.

“Through compelling, hands-on exhibitions, it will introduce future generations to the struggle for equal rights in the South, throughout the United States and around the world,” Blank added. “The Civil Rights Gallery exemplifies the spirit of Atlanta and embodies my family’s values. We are honored to be a part of this legacy project.”

Eddie Meyers, regional president of PNC Bank — Greater Georgia, said he also was pleased his bank could play a role.

“When we heard about the Center’s need for New Markets Tax Credits, we were interested as that was something we had,” Meyers said. “Once we did the research and realized who were the individuals involved with the Center and what the project meant to Atlanta, we got involved in the project quickly.” 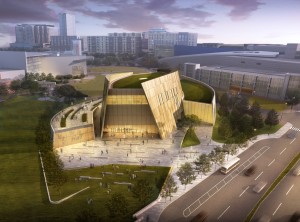 Another significant development is that the most generous individual private donor to the Center, who up until now has been anonymous, has agreed to be identified.

The Wilbur and Hilda Glenn Family Foundation — an early backer of the Center — has donated $5.5 million to the project.

“Many of Atlanta’s citizens and events have demonstrated a commitment to the rights and well-being of others,” said Thomas K. Glenn II, chair of the Glenn Family Foundation. “It is important to have a national center devoted to such concerns, and it makes sense, for numerous reasons, to have the Center here in Atlanta.”

Shipman said the Center now is about to launch a public small donor campaign. And with its continuing fundraising effort, the Center expects to open with a fully funded endowment. He also said the Center will open “pots of money” that will allow it to undertake several initiatives to make it a gathering place on modern-day issues related to civil and human rights.

The business plan anticipates that the Center will attract about 400,000 visitors the first year and 350,000 visitors in subsequent years. The top ticket price will be $12. Unlike most other cultural organizations, the Center is expected to be financially sustainable without the need for an annual campaign.

Shipman said the Center already is in a position to begin planning for Phase Two and Phase Three — allowing it to fully build out the original vision for the Center.

Phase Two likely will provide additional exhibit space especially for special shows. Phase Three is expected to house an auditorium. Each wing is expected to cost about $10 million. Shipman said the plan is to raise $5 million in endowment to support each phase.

Previous Article
Replacing the notion of ‘off-shoring’ and ‘on-shoring’ with ‘right-shoring’
Next Article
Meredith Leapley’s Moment was when her father closed his firm, sparking her to just start her own