Someone ran 100 miles and showed up last week at the Central Night Shelter downtown with a pocketful of checks totaling $10,000, an eye-popping climax to a story of one man trying to help the many homeless men who had shown him how to better appreciate his own life. 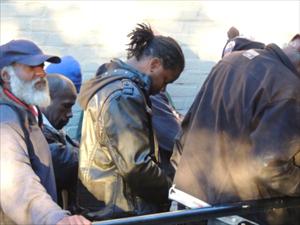 The Central Night Shelter is a ministry of hospitality and compassion to homeless men in downtown Atlanta. It began in 1980 after deaths of homeless people in the shadow of the State Capitol.

His donation shone light on the endurance of the shelter, which has for 32 years housed and fed about 100 men a night at Central Presbyterian Church and the Catholic Shrine of the Immaculate Conception. Between November and March, this shelter has never missed a night.

Almost every homeless shelter in the country has some paid staff, but not this one. It exists entirely on volunteer efforts.

The money was also a testament to the enduring truth of volunteering: that the giver often receives a greater gift far beyond food, shelter or material gain.

“When he called me a year ago, I didn’t even know who he was, and he said he wanted to run 100 miles to raise money for us,” said Katie Bashor, the shelter’s director. “I honestly thought it might be a few hundred dollars.”

“He” is Rami F. Odeh, a 50-year-old personal trainer and fitness center owner from Sandy Springs. His spiritual journey to “quiet the noise” in his life revealed his purpose is to share what he has with others. After converting to Catholicism in 2008, Odeh joined a men’s group at St. Jude the Apostle Catholic Church and started volunteering overnight at Central Night a few times a year.

He expected to feel good by doing good, to be thanked by those less fortunate. Instead, over many months, he was thanking them.

“I had a preconceived notion of what I thought a homeless person was like, but that all changed when I started helping out at the shelter. What struck me was that a large percentage of these guys actually have jobs,” Odeh said. “So how is this that they’re homeless? I went over the math with them, and with minimum wage, if they had to pay rent and utilities, it would be impossible unless they worked more than 80 hours a week.

“Trust me, there are men who look and act like you might expect a homeless man to,  but I met an M.D. who is homeless, and a CPA who was a partner in his firm, and heard about how through drugs and drinking, they spiraled down and lost everything. That was a shock.

“Every time we left the shelter after staying overnight, we all said, ‘OK, let’s just try not to complain for a week.’ It just didn’t matter anymore if your Mercedes Benz had broke down or there was a leak in the roof of your second home at Lake Lanier.

“There were all kinds of changes in perspective for me. We don’t think about how lonely that life is, and it kept me grounded.”

Through these encounters and his own distance running, Odeh became more convinced of  isolation as a path to understanding what is truly important in life. 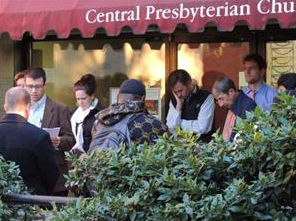 Central Night Shelter hosts about 100 men each night from Nov 1 to March 31. They stay at Central Presbyterian Church and the Shrine of the Immaculate Conception, which are near the State Capitol.

The homeless men, after spending hours on their feet in extreme conditions, overflowed with gratitude for life’s basics. Odeh, after spending hours on his feet running more and more extreme distances, discovered inside himself a “raw and quiet place. It shut down the chatter in my head and allowed me to be more peaceful.” His pinnacle became a 100-mile ultramarathon, and his goal was to attract $30 in pledges per mile.

“We live such a soft life  in America,” says Odeh, who owns and operates Formwell Personal Training Studio. “Rawness through this kind of physical training is something that the human body and spirit really needs. It’s like cleaning house.”

On the first weekend in November, Odeh embarked on the Pinhoti 100 across Alabama’s Talladega National Forest. It was the hottest Nov. 3 in state history, and the terrain was so severe that the total elevation gain was 16,000 feet (the height of 10 Stone Mountains).

Nausea and extreme foot pain almost made him kick the bucket list idea and drop out. But he kept focused on what was printed on his bright orange shirt: “100 Miles For The Central Night Shelter.”

Helping the men was his carrot: “Pledges per mile made me know that each mile meant another $85 for the men. Their perseverance and motivation to keep going helped me gut it out. They stick it out every day because they believe even on a bad day, it’s going to get better.” 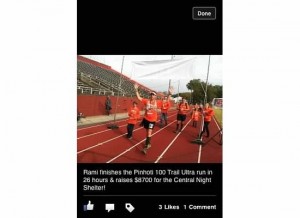 Rami Odeh posted this to social media after he finished 100 miles of trail running over 26 hours, to raise money for the Central Night Shelter.

The “fast hike” took him just under 27 hours. Over the next few weeks, something else extreme happened: even more donations came in than Odeh expected. Strangers who got wind of his project sent checks to his house. All told, he raised $100 a mile.

When Odeh delivered the donation Dec. 11, he had heard the clapping many times before. “It was the same for every meal served at the shelter,” he said. “They appreciate everything. It doesn’t have to be a grand act.” In him he saw mirrored his new appreciation for everything in his life.

The $10,000 is the largest donation from an individual in shelter history. It is equal to three months of expenses at Central Night – paper goods, cleaning supplies, towels and a nominal amount for electricity, gas and water. Because the shelter is volunteer-run, all of his dollars go straight to helping the men. 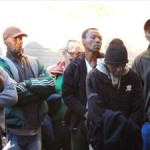 About 100 men spend each night at Central Night Shelter.

Speaking of those volunteers, they come from everywhere: college fraternities and civic groups, white collar criminals required to put in service hours, and students pumping up their college resumes.

And expect a transformation inside yourself, Rami Odeh will tell you.

Previous Article
‘Pure evil’ and the horror in Connecticut
Next Article
The Rolling Stones at 50: Lessons for Tech Companies