Atlanta lost one of its most colorful leaders with the passing of Charlie Loudermilk, 95, on Aug. 3.

The Loudermilk family will hold a small gravesite service on Aug. 9. A more public service will be held on Thursday, Sept. 8 at 3 p.m. at Peachtree Road United Methodist Church with a following reception at the Buckhead Theatre.

Loudermilk, founder of Aaron’s, became a fixture in Atlanta for decades – as a philanthropist, as a booster of Buckhead, as chair of the MARTA board, as an advocate for the Republican Party and as a prankster with a playful personality. 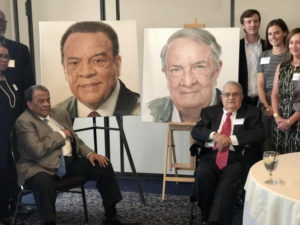 Unveiling of Ross Rosin’s paintings of Andrew Young and Charlie Loudermilk on Aug. 15, 2018 in honor of the Loudermilk-Young Debate Series. (Photo by Maria Saporta.)

For me though, his endearing legacy will be his unique friendship with Andrew Young – one that lasted more than 50 years.

The first time I interviewed Loudermilk was in 1981 when Young was running to become Atlanta’s mayor, succeeding the city’s first Black mayor – Maynard Jackson. There were four major candidates – two whites and two Blacks. So, I decided it would be interesting to interview the top person of the opposite race for each of the mayoral campaigns.

That’s how I got to know Charlie Loudermilk. I asked him why he was supporting Young, and he told me he thought Young would be the best mayor for Atlanta and the most likely winner. Then I asked why he wasn’t supporting the leading white candidate – Sidney Marcus – or the other two candidates.

I remember he carefully paused before saying with a twinkle in his eye. “You’re dangerous,” he said.

Loudermilk was the only well-known white Atlanta business leader to support Young’s candidacy – making him a bit of a pariah among the established business community.

“His friends were mad at him for supporting Andy, but he knew they could work together,” recalled Lisa Loudermilk Degolian, his daughter. “He saw Andy as a great person no matter what his politics were.”

In an interview Saturday, Young explained that he didn’t want to run — or win — without any white support. 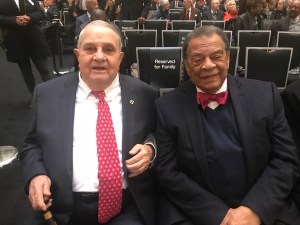 “I knew I was going to need somebody to put the community back together,” Young said. “You can’t run a city divided.”

The day after Young won the election, Loudermilk and Atlanta Life executive Jesse Hill approached the godfather of Atlanta’s business community – Coca-Cola’s Roberto Goizueta – to convene a meeting with the mayor-elect.

“We had 85 people on that Friday for lunch at the Top of the Mart,” Young said.

It was at that meeting that Young told business leaders it was possible for him to win without their support. But he could not govern the city without their help. So, he gave them all his home number, urging them to reach out to him.

Young’s relationship with the business community grew stronger during his eight years as mayor as he helped build Atlanta’s profile through influential trade missions around the world and the international expansion of Delta Air Lines.

During the 1970s and early 1980s, Atlanta’s established leaders were less willing to integrate the business of the city.

“They focused on believing the economic pie would stay the same,” Young said. “But we made the pie bigger.”

At the center of Young’s administration was Charlie Loudermilk, who with the mayor’s backing, became chair of the MARTA board. 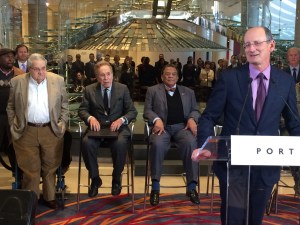 “We were trying to get MARTA to go into the suburbs,” said Young, lamenting that they didn’t succeed. “It wasn’t that we didn’t try.”

It wasn’t just Young and Loudermilk. A close friendship also developed between them and Atlanta architect John Portman, minority builder Herman Russell and Atlanta Life’s Jesse Hill. They were seen as the four or five musketeers who loved to joke around.

“Of that group, I was the youngest,” said Young, the only one of the five still living. “When you stop and think about it, they all were born very poor but they all made it on their own. The thing I remembered was the argument of who was the poorest, which boiled down to who was the last to get indoor plumbing. It turned out to be John Portman.”

I remember going on several trade missions with Young, Loudermilk, Russell and Portman – Scandanavia in 1984, France in 1985 and the Soviet Union in 1989, when I was six months pregnant. Loudermilk loved to embellish the story saying that I was nine months pregnant, and everyone was worried I was going to go into labor and have a Russian baby.

Over the years, I followed Loudermilk and Young and the other musketeers through their various endeavors, such as winning the 1996 Summer Olympics, and their various business and philanthropic initiatives. 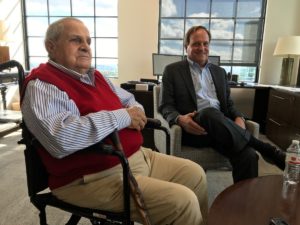 Charlie and Robin Loudermilk in an interview in October 2017 at their offices in Buckhead. (Photo by Maria Saporta.)

Sometime in 2008, I asked Charlie Loudermilk if we could have lunch. As chair of the Atlanta Press Club’s debate committee, I had been trying to get an endowment for our debates. We met at the Atlanta Fish Market in Buckhead, where I made my pitch.

I could tell he was intrigued. But it took more than two years (countless lunches, dinners, drinks) to get him to a yes. Finally, in 2011, the Atlanta Press Club was able to announce that Loudermilk had pledged $1 million for our debate series.

One of my fondest memories was inviting Young and Loudermilk to Georgia Public Broadcasting on Dec. 6, 2020, for the run-off debates between U.S. Sen. Kelly Loeffler, Rev. Raphael Warnock as well as Jon Ossoff and U.S. Sen. David Perdue (a no-show). The Loeffler-Warnock debate was simulcast on CNN, Fox News (Loudermilk’s favorite channel) and countless other media platforms – a high-water mark for our debate series.

“That really was a special night,” said Degolian, who had accompanied her father to GPB. “They sat there looking like old friends.”

“Charlie was in good spirits every time I saw him,” said Young, adding they rarely discussed partisan politics. “The main thing we disagreed on was Georgia Tech versus North Carolina. Charlie liked the fact that we could talk about the business of the city.” 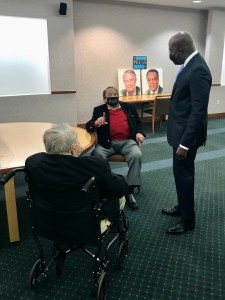 Young went by Loudermilk’s hospital room to pay his final respects two days before his friend died from the after-effects of a stroke.

“It was incredibly tender,” Degolian said. “It reminded me of when my dad and Andy went to tell John Portman goodbye.”

The last several weeks offered a series of memories.

On July 12, Loudermilk celebrated his 95th birthday, which turned into a quasi-family reunion. On July 19, Loudermilk attended the 80th birthday party of his friend, Charlie Smithgall III, fully dressed as a cowboy with two young cowgirls.

His son, Robin Loudermilk, said a couple of weeks ago, his father told him he was broke.

“’I need some money,’” Robin remembered his father saying. “I gave him $500. It was like giving ice cream to a kid. That last memory of him is so sweet.”

For me, I’ll always remember interviewing Charlie Loudermilk and Andrew Young in a video about his gift to the Atlanta Press Club.

“People over the years have asked me how does a white conservative Republican have a close relationship with a Black liberal Democrat?” Loudermilk said in the video. “I just say, that’s the way we do it in Atlanta.”

To view the shorter version of the video interview, click here.