For decades, the Chattahoochee River has been an undervalued amenity and unrealized opportunity for the Atlanta region.

But that’s about to change.

The recently-released Chattahoochee RiverLands Greenway Study – a partnership between the Trust for Public Land (TPL), the Atlanta Regional Commission (ARC), the City of Atlanta and Cobb County – envisions creating a continuous 100-mile park from Buford Dam to the Chattahoochee Bend State Park. 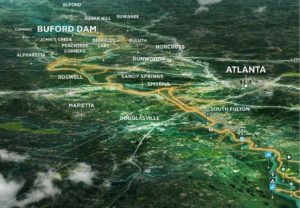 The planning process was guided by the Chattahoochee Working Group with more than 70 local stakeholders including multiple city, county, state, and federal government agencies and environmental-focused nonprofit organizations. About 75 meetings were held to develop an equitable vision for people accessing the river.

The ARC board will vote to adopt the plan at its monthly meeting on Aug. 26. If approved, the 125 miles of multiuse trails as well as 25 new or improved bridges over the Chattahoochee River will be eligible for federal transportation funds.

The Chattahoochee Riverlands corridor travels through 19 cities and seven counties – demanding regional approach in both the planning and implementation of the ambitious project.

“When we started this project, we realized there have been 40 years of effort around the river,” said Byron Rushing, ARC program manager of bicycling and walking. “We really wanted to understand the issues of equity and access to the river.” 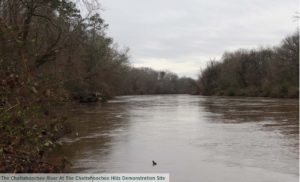 But in the 1990s and 2000s, that began to change. TPL launched its Chattahoochee Green Ribbon initiative to protect the river by acquiring land along the riverway. The Chattahoochee Riverkeeper was established – holding local governments accountable through legal actions.

And the City of Atlanta under Atlanta Mayor Shirley Franklin, under the threat of a federal consent decree, invested billions to improve its storm water and sewer infrastructure, an effort that is still underway.

“For the first time in recent history we are able to allow people to access the river safely,” Rushing said. “It’s still not perfect, but it’s much better than it was.”

The Chattahoochee RiverLands Greenway Study would go a long way towards metro Atlanta’s goal to create a regional network of multi-use trails for cycling and walking.

“We see this as stitching it all together – putting the pieces into a grand vision,” Rushing said.

It also identified three demonstration projects for the first phase of implementation:

Creating more equitable access to the Chattahoochee is a major focus. 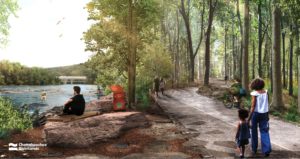 The estimated cost to build out the entire Chattahoochee RiverLands Greenway Study is about $500 million, which Dusenbury said is a fraction of what it is costing to redesign the interchange of Georgia 400 and I-285.

TPL will lead the way to secure private funds and to acquire needed land to implement the vision for the trails along the Chattahoochee. It is called “RiverLands” because of its efforts to invite people to experience the river both from the land and on the water – also described as greenways and blueways.

Walt Ray is coordinating the project for TPL as the Michael J. Egan Chattahoochee Conservation Fellow.

Dusenbury said a top priority will be along the City of Atlanta/Cobb County section of the river from Peachtree Creek to Campbelton Road.

“We feel we are needed most in this area,” Dusenbury said. “We feel our resources are most needed in that space. There’s an immediacy and a need for equity.” 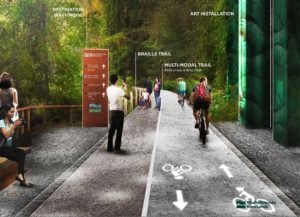 The team also is working to develop design guidelines with a goal of creating a seamless network and a common vision for the trails.

The ultimate goal will be to tie the Chattahoochee trails with other projects across the region, such as the Flint River, the South River, the BeltLine and the PATH system.

“Chattahoochee Riverlands is a foundational stone in our regional trail network,” Rushing said. “We have learned a lot from watching the BeltLine on how you can grab the big vision.”

For Doug Hooker, ARC’s executive director, it’s about creating a new eco-friendly development pattern for the future with equity as a centerpiece.

“In 10-15 years, we’ll probably be one of the top metro areas in the county with having a trail network that will be connected,” Hooker said. “Chattahoochee RiverLands is both a plan to amplify our regional trail network and to get metro Atlanta’s population closer to the river. We hope it will cause generations present and future to better appreciate the beauty of the river.” 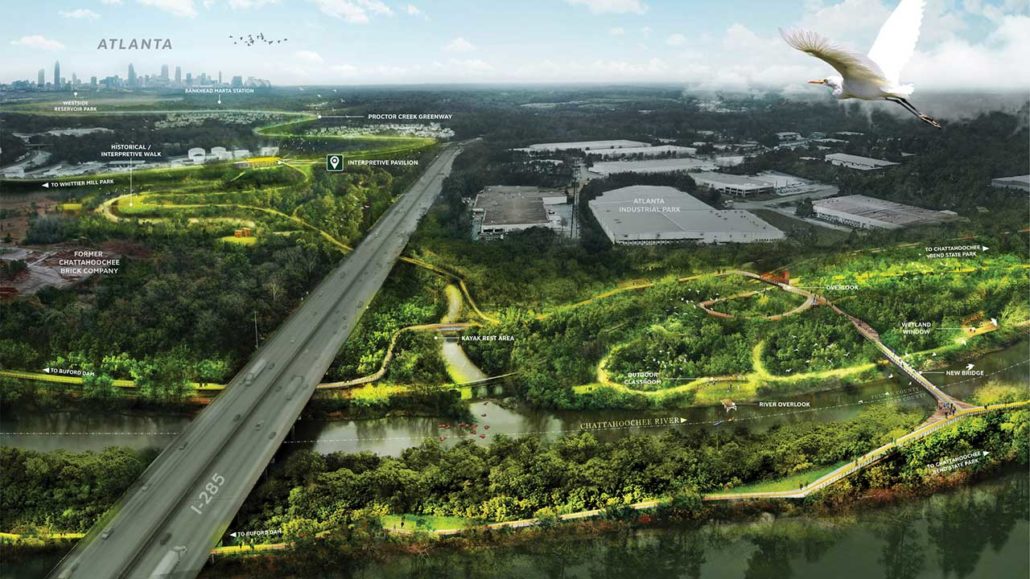