The scarcity of access to the Chattahoochee River has been eased with the opening of a boat ramp in Chattahoochee Hills. It’s just the second ramp on the southern side of metro Atlanta, according to Mayor Tom Reed. 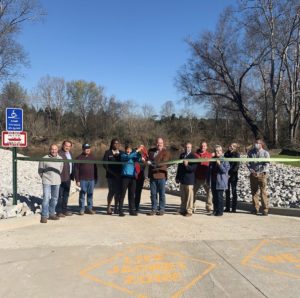 The boat ramp was officially opened in a Nov. 20 ceremony and Reed had heralded the event with a flourish. Writing in the city’s newsletter in advance of the Nov. 20 ribbon-cutting ceremony, Reed observed:

The state was equally bullish on the new access point. In a statement, the Georgia Department of Natural Resources’ Wildlife Resources Division noted: 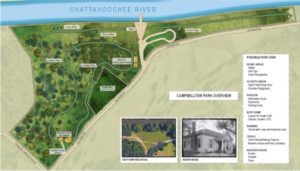 Campbellton Park, in Chattahoochee Hills, is the site of the state’s newest boat ramp into the Chattahoochee River and the historic Beavers House. Credit: chatthillsga.us

The ramp, and its parking lot and surrounding area, are expected to be destinations for recreation. The state anticipates the boat ramp will serve more than 5,000 folks who will be launching vessels ranging from canoes to fishing boats.

The ramp is located in the city’s Campbellton Park – itself an historic area.

The ramp is 18 feet wide, which provides ample room for the simultaneous launch and retrieval of two vessels at a time. The parking lot provides space for eight vehicles with trailers, and an additional five parking spaces for vehicles. ADA-compliant parking is provided.

The facility is to be open 24 hours a day, seven days a week.

Campbellton Park is sometimes call Old Campbellton Park, in recognition of its legacy as part of Old Campbellton, which was an early settlement as white settlers moved into the area. The Beavers House is located here, a dwelling established for John Beavers, a settler who farmed in Virginia before moving to Jasper County in 1809, followed by a move to the former Campbell County.

An historical account of the Beavers House and other sites in the city was compiled by Laurie Searle, a member of the Chattahoochee Hills City Council.

Mayor Reed devoted a large part of his column about the new boat ramp to the history of how the city came to acquire 18 acres of land abutting the Chattahoochee River.

Reed recounts how the greenspace was to be within the city’s limits, but had been carved out by the final version of legislation that set a vote for cityhood, in 2007. Eventually the city annexed the property.

The ramp was funded with federal Sport Fish Restoration funds and matching state funds, according to DNR’s statement. 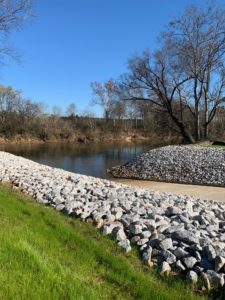 The boat ramp in Chattahoochee Hills’ Campbellton Park is the second access point to be opened into the Chattahoochee River south of Peachtree Creek. Credit: Georgia DNR