In the wake of a setback in the climate-change lawsuit filed by 21 Oregon children against the federal government, the Center for a Sustainable Coast has renewed its call on Savannah to transition to 100 percent clean energy by 2030. 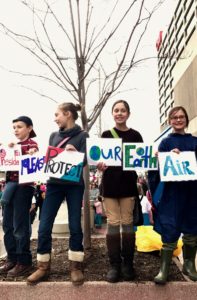 Some youngsters in metro Atlanta have joined in the global movement of young persons calling for greater environmental protections. Credit: Kelly Jordan

The renewed call for the city’s elected leadership to take action is a direct response to a remark in the appellate court’s ruling – that the job of addressing the environment is one reserved not for the courts, but for the executive and legislation branches of government.

The federal lawsuit that sparked the renewed call was filed by 21 young adults, aged 21 to 23 years, with Kelsey Juliana as the lead plaintiff. The lawsuit contends the federal government’s affirmative actions are causing climate change, thereby denying the young adults their constitutional rights to life, liberty, and property. In addition, the lawsuit contends the government has failed to protect the public’s trust resources, according to a statement by two supporting organizations Our Children’s Trust and Earth Guardians.

The center’s basic contentions were affirmed in ruling by a panel of judges acting on behalf of the U.S. Court of Appeals for the Ninth Circuit, in Portland, Oregon. A summary of the ruling, as written by the judges’ staff, observes: 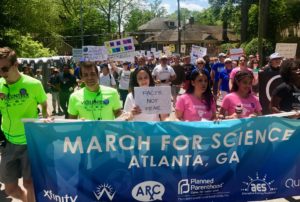 The March for Science brings together youngsters who want elected leaders to know they support science and evidenced-based policies. The event culminates the annual Alliance Science Festival. Credit: Kelly Jordan

However, the ruling ultimately went against the children plaintiffs. Judges decided the proper venue for addressing climate change is in the legislative or executive branches, not by the judiciary. Lawyers for the children said they plan to ask for a review by all of the court’s judges.

The Center for a Sustainable Coast, based on St. Simons Island, posted its response to the ruling on Facebook under this headline:

The collaboration is an effort to have Savannah’s mayor and city council vote to enact a policy of 100 percent clean energy by 2030. The coalition has provided to the city’s leadership a clean-energy proposal that is inspired by policies adopted in Atlanta and Athens-Clarke County.

The list of supporters of the clean-energy proposal includes Environment Georgia, which has worked for similar policies for other governments. Last week, the group held up as role models in clean-energy efforts 11 college campuses in Georgia that have implemented efforts to reduce energy consumption or to generate clean energy.