Photo by visuals on Unsplash.com

Big business may pull the political strings in Atlanta, but small business drives much of the economy and culture. Four of the candidates for City Council president were grilled on ways to help the sector at a Sept. 25 forum, one of a small-business series hosted by the Old Fourth Ward Business Association. 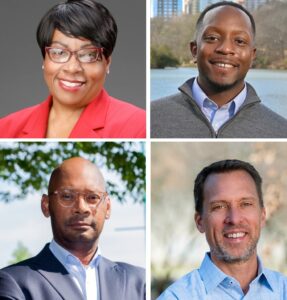 Among the topics were speeding up permits and licenses, affordability of commercial spaces, and supporting nightlife.

Participants included Natalyn Archibong, the current District 5 City Council member; Courtney English, former Atlanta Board of Education chair and now an executive at a nonprofit that provides wrap-around services to apartment complex tenants; Mike Russell, a former U.S. Army officer who runs an online gift business; and Doug Shipman, former CEO of the Woodruff Arts Center and the National Center for Civil and Human Rights. Another candidate running on the Nov. 2 ballot, Sam Manuel, did not participate.

While the candidates agreed that life needs to be easier for small businesses, the forum teased out some differences in their approaches. The following were their takes on some key issues.

The small-business forum actually started with a big-business question from sponsor MailChimp, the medium-sized marketing company that is being acquired by software giant Intuit. The question related to MailChimp hearing its small-business clients talk about a need for more access to technology and mentorship. The answers gave some hints of the candidate’s different modes of governing.

Archibong focused on City Hall’s methodical processes, noting there is a Small Business Advisory Council investigating such issues; she filed the legislation for its formation. As an attorney in private practice, she’s also a small business owner.

Shipman highlighted nonprofit partnerships the City could tout and possibly fund, such as the Russell Innovation Center for Entrepreneurs and a hackathon program founded by the leader of Atlanta digital marketing agency Dragon Army.

Russell said that when he and his husband founded Anders LLC, their online gift business, capital and networking were challenges, but that a direct role for government might not be necessary. “I don’t think necessarily that the City has to do it,” he said, adding government could simply publicize opportunities and “help connect the dots.”

English said that the biggest issue is “sponsorship and access to capital.” Large corporations get the bulk of capital today, he said, and Invest Atlanta, the City’s economic development agency, has a “high barrier” for access to capital.

Most of the candidates agreed that City government has problems of favoritism toward big business and friends of elected officials.

English said Atlanta’s system “goes out of its way” to favor large corporations in permitting, tax incentives and other ways, adding, “I think that system needs to be blown up and turned on its head.” English said the alcohol license system is largely based on “political favors” and repeatedly claimed members of a City review board are appointed with “nepotism.” The forum questioners did not ask English who he was referring to regarding nepotism and he did not respond to questions later.

Archibong said the City needs to fix various permitting issues. “But what I’m hearing that disturbs me the most is, the sense is that if you really speak up, if you really speak truth to power, there’s a penalty phase for that,” she said. “And so I want to have a possibility around establishing a pathway for real concerns and real complaints to be shared with the mayor in particular.”

Russell said that, based on his experience starting his business, “there seems to be a good old boy network” and that he believes “there’s a lot of corruption and cronyism in the City.” He said contracting, particularly for Hartsfield-Jackson Atlanta International Airport, should be performed by an independent third party. He said he has not received campaign contributions from such contractors — some of the others have — “so I owe them nothing.”

Most of the favoritism discussion came out of a question about City systems making life easier for big businesses. Shipman’s response focused on doing business with the City itself. He said the City’s invoice system can take 180 days or more to issue payments, which is “absolutely a death knell for small businesses.” He said the City could attract more women- and minority-owned businesses by showcasing requests for proposals in advance, as was done in building the human rights museum Downtown. More generally, he said there had to be more support for creation of jobs via small businesses rather than “trickle-down” from helping large corporations.

Speeding up permits and licenses

The City’s business permitting and licensing systems are widely unloved and criticized as slow, complicated and uncoordinated. All of the candidates agreed they must be sped up and that a new business should be able to open within two months: English and Russell said 30 days; Archibong and Shipman said 30 to 60 days.

English, Russell and Shipman all called for better and more transparent technology to make things easier for applicants. Shipman said he understood that during pandemic shutdowns, the City used such outdated tech as faxes and suggested holding a software hackathon for improvements.

Archibong focused on changing systems with the input of City staff. “We can talk about new technology and [digital] systems, but there are some things that don’t make sense and are fundamentally flawed,” she said. Archibong criticized some basic decision-making moves such as the City altering the business permitting system in the midst of the pandemic while the staff was working remotely.

The need for many applicants to use lawyers or other assistance was condemned by English, who called it a “cottage industry” that shouldn’t be necessary, and Russell, who said the need to “hire an expediter” is “absolutely ridiculous.” English also called for more funding for the permitting office and to end the practice of requiring the mayor’s signature on the final document.

Specifically on alcohol licensing, most of the candidates supported reviewing or changing the City code that dictates how it works. Archibong expressed interest in a “pretty provocative” idea of creating a joint City and state review process rather than the current separate tracks. She also said there is a “technical advisory group” on the issue of alcohol licensing that has not convened, as another example of whether the City needs to improve its process. English made his call for ending the alleged “nepotism” on the License Review Board.

Nightclubs and other nightlife businesses play a major role in Atlanta’s cultural identity and economy — and some have played a role as centers of the recent spike in violent crime. Jordan of Butter.ATL asked the candidates about nightlife in terms of how the City can better support such businesses and not treat them as a “liablility.”

English and Shipman both praised the importance of nightlife while tying its problems to alcohol licensing reform. Certain nightclubs and bars improperly licensed as restaurants is an issue repeatedly cited by City leaders and the Atlanta Police Department.

“Atlanta’s culture is probably our biggest export, and it’s incredibly important that we continue to protect that culture,” said English, calling for a “nighttime mayor” position to provide City services support to them.

He also called for reviewing the issue of improperly licensed businesses, saying that “good actors” and “bad actors” had to be separated. At the forum’s end, Emma Tinsley, executive director of the Old Fourth Ward Business Association, criticized that phrasing without directly mentioning English, saying that alcohol laws should first be reviewed and reformed before determining whether businesses were good or bad actors.

“I appreciate you linking nightlife and arts and culture,” said Shipman, who called for more than doubling the City’s current arts spending of $3 million to $4 million. He said the City should consider creating districts where people can walk among businesses with open containers of alcohol, which has become popular in suburban cities. He also called for generally increasing the police force and expanding the pre-arrest diversion program, which is oriented to providing social services, to overnight duty.

Affordability of housing and commercial space

The affordability of space for small businesses and of housing for their employees in a gentrifying city were issues raised by the questioners.

The candidates addressed housing affordability in-depth at a previous forum. But in this one, Archibong and Shipman added some critical commentary about controversial zoning legislation, sponsored by City Council Zoning Committee chair Amir Farokhi, that would allow more accessory dwelling units and small apartment buildings near transit stations.

Shipman called the legislation “too blunt an instrument” and not ready to be passed. Archibong said she wouldn’t comment directly on the legislation while the vote is pending, but that she shares “consternation” about it. She also noted that Farokhi is in his first term and said that if she were council president, councilmembers would know they are “empowered to say, ‘No, this has not been properly vetted’” when asked by the administration to introduce legislation.

As for commercial affordability, Shipman suggested that economic incentives be tied to providing low- or no-cost space to small businesses and that philanthropies could underwrite such programs.

Russell repeated his support for the model of the nonprofit Purpose Built Communities, which involves mixed-use developments with mixed-income housing. He said government incentives should be targeted at areas and businesses in need rather than being general and citywide.

English suggested the City guarantee loans for small businesses with “high growth potential.” He also called for more consistent process and input on changes that affect small businesses, pointing to the recent pedestrian-oriented closure of part of Edgewood Avenue as “good idea, poor execution.” Not mentioned was that Archibong co-sponsored the legislation for that closure.

Archibong recounted the story of a hairdresser forced out of East Atlanta by a tripling of the rent, saying the City had no tools to help. She said there needs to be programs for educating commercial tenants about their rights and ways to address cost burdens.

Where the candidates hang out

Jordan asked the candidates when they last visited the Old Fourth Ward and surrounding neighborhoods and where they hung out.

Archibong said she is in her East Atlanta Village business district all the time and has her campaign office in Old Fourth Ward. She also named the Georgia Beer Garden as a favorite.

Russell said his latest visit was a potluck at a private residence for LGBTQ members of his church. He said a medical condition limits his participation in nightlife. “I cannot go out at night because I have serious glaucoma,” he said.

A lighter moment of the forum was a mini-debate among the journalists asking the questions on the merits of hipster businesses. Keenan asked how Atlanta’s small business scene could avoid gentrification and becoming “littered with artisan pickle shops and $25 hamburger joints.” Jordan stepped in to to defend artisan pickles, as naturally it turns out there is an Atlanta business that makes them.

In a later call for supporting non-chain, local businesses, that discussion inspired Archibong to say that communities do not want “partisan pickle shops.” Thankfully, that was a slip of the tongue and not yet another way national politics are becoming local.

In forum on housing affordability, council president candidates reveal how they think and lead