Despite another delay in the closing of the Underground Atlanta sale to WRS Realty, both the city and the developer said they are committed to the deal.

The transaction has gotten held up over a proposed land swap between the City of Atlanta and the State of Georgia.

The city has committed to the developer that the sale would include a state-owned parking facility located in between Underground and Georgia State University. And the state is interested in swapping that for the Bobby Jones Golf Course in Buckhead.

But there has been community resistence to the idea of a state-owned Bobby Jones course.

In an editorial board meeting with the Atlanta Business Chronicle, Atlanta Mayor Kasim Reed said that issue will not get in the way of the $25.75 million Underground sale.

“If you get to a point where you can’t come up with an agreement that satisfies everybody, then we move forward with the purchase of the parking deck from the state and just travel down that path,” Reed said.

Reed said there have been appraisals of both the land the city wants from the state and the Bobby Jones Golf Course. Both are valued at about $10 million.

“We have the $10 million to buy the parking deck,” Reed said. “We will close the Underground Atlanta transaction in first quarter, definitely within the second quarter. It leaves Underground fine.”

“It’s a very important part,” Smith said. “Our plans are to use it for development when we get it. There would be a parking component to it. We are talking about adding a large grocery store down there along with 900 to 1,000 multi-family and student housing units.”

Smith called the area “overparked for what’s there now,” but not for the $350 million to $400 million development WRS has planned for Underground.

Smith said the firm is planning to have “additional retail and additional parking and possibly multifamily on that site.”

Mayor Reed said Underground parking issue has been the reason for the repeated delays in closing the sale. Originally, the sale was supposed to have closed last summer, then last September and then it was postponed to January before this latest delay.

“The last element in the underground development is parking because of the size of the development,” Reed said. “The reason we need the parking is because of the size of what they are contemplating doing there. So, it strikes me that’s a good problem to have. The kind of quality of apartments they have is going to be at a price point where people won’t tolerate having to look for parking.”

Reed added that Underground will have an “affordability component,” but he didn’t know what percentage of the units that would be.

Meanwhile, Smith is anxious to start the development so it can be completed during this real estate cycle.

“I see no reason why this project won’t happen,” said Smith, adding he is not involved in the negotiations between the city and the state. “The sooner we start, the better.” 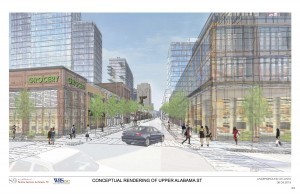 The Mayor did say the preferred option is to do a land swap with the state so that there will be renewed investment in the Bobby Jones course as a place where university golf teams could play.

“There’s no mystery to this,” Reed said. “Some folks were trying to help a golf team have a place to play. And some folks with philanthropic interests thought this would be terrific and were willing to help.”

Despite community concerns to the contrary, Reed said there is “no commercial transaction tied to this in any way.” He said the state would be a better steward of the property than the city.

“What is stunning to me is I never thought I’d live to see the day in Atlanta where people would rather the city hold this property than the state,” Reed said “You’ve the state with AAA credit, two billion dollars, that could maintain whatever facility you ultimately did for forever, and it be pristine. And you have the city that is investing almost zero dollars in golf courses…, and is getting ready to bid out all the golf courses right now. Because we don’t make any money on them at all.”

Reed said if the state doesn’t end up with the golf course, it will remain in its current condition with “debates about this golf course that are never going to end.”

But if the Bobby Jones swap with the state falls through, Reed said the Underground sale will move forward

“The state doesn’t want a vacant Underground either. It’s not like the state with the State Capitol sitting there has an interest in Underground being abandoned. They don’t,” Reed said. ” If this turns out to be untenable, then we would simply buy the parking deck.”