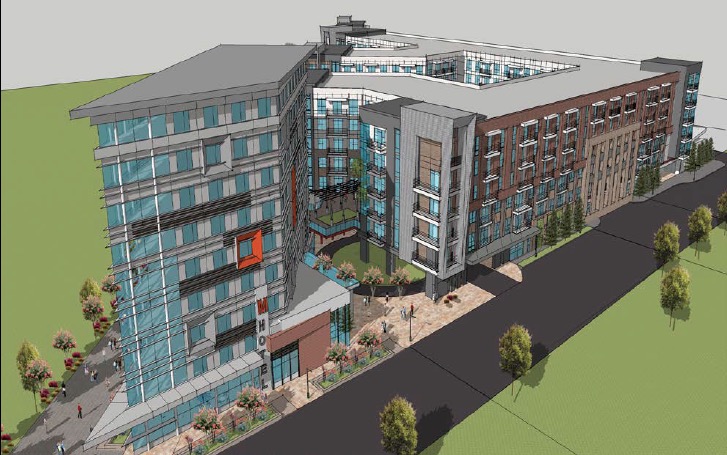 A sketch included in an Invest Atlanta handout shows a developer's vision for a mixed-use complex on the BeltLine near Piedmont Park at Tenth Street and Monroe Drive. Credit: Courtesy Invest Atlanta

Atlanta’s development agency took the first step to selling a piece of prime Midtown Beltline-front property that a developer is eyeing as part of a big mixed-use build. But acknowledging the alarm from some neighbors, Invest Atlanta did impose conditions, including community engagement, for closing the deal.

“If we go through this, and the six conditions are not met, then the sale is never consummated,” said IA President and CEO Eloisa Klementich, pointing to a handout summarizing the sale, just after her board approved it via voice vote, with two dissents.

The deal would see Fuqua Acquisitions II, LLC, buy a 1.46 acre strip of land fronting the BeltLine across from Park Tavern for $2.5 million. It’s part of a triangle of land on which the company and partners are envisioning a project that could include a grocery store (20,000 square feet), restaurants (15,000 square feet), an 11-story hotel, 351 residential units (mostly apartments) and 745 parking spaces. 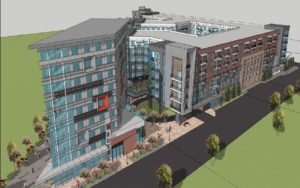 A sketch included in an Invest Atlanta handout shows a developer’s vision for a mixed-use complex on the BeltLine near Piedmont Park at Tenth Street and Monroe Drive. Credit: Courtesy Invest Atlanta

The members of Fuqua Acquisitions II include Fuqua Development; LP; 10th & Monroe, LLC; and Oakwood Development. Those or related entities or people already own at least a majority of other parcels in the triangle between Monroe Drive and Cresthill Avenue, according to tax records.

The conditions include the developer collaborating with the BeltLine on design, making transportation improvements and signing an agreement to lock in some below market-rate “affordable” units for 15 years.

Some Fuqua visions for the site have existed for more than a year.

The overall project would cost developers almost $167 million, as it’s drafted now. The property taxes would be worth $2.9 million annually.

But some neighbors are alarmed about having hotel guests and more than 300 new neighbors. They’re worried about things like how to find seats in packed neighborhood schools for new children and how the roads are supposed to handle more vehicles. 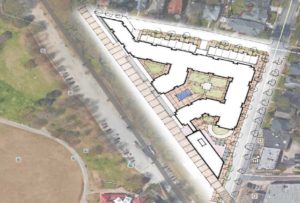 A sketch of the footprint of the mixed-use development envisioned by Fuqua Acquisitions II, LLC. Credit: Courtesy Invest Atlanta

A few hung around after the vote to speak during the public comment period. As is IA’s normal practice, public comment comes at the end of meetings. That’s a little emblematic of another frustration neighbors voiced: that they’re not being heard. Indeed, the item did not appear on IA’s agenda, though the Atlanta Business Chronicle reported on Monday it was likely to come up.

The city can — and does — keep real estate-related negotiations private. IA issued an RFP last year in a search for plans for the site.

Atlanta City Councilwoman Natalyn Archibong voted for the deal as a board member on Thursday, but emphasized that the list of possible uses isn’t etched in stone. It’s just the first step in a nine-month process that will include review by the BeltLine and the city and conversations with the community.

She said she’s been contacted by members of the community, she hears them and she trusts the process on the city side to have the outcome the community wants. 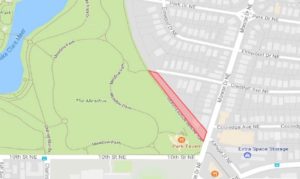 The land on the BeltLine that Fuqua is looking to acquire. Credit: Courtesy Invest Atlanta

“If this was the final step in the process, please trust me community,” Archibong said, addressing the audience, “I would not have supported it for all the reasons you named.”

BeltLine President and CEO Brian McGowan said the public engagement on the plans will be real. “We’re going to make sure we’re actively reacting and involving the community,” he said.

But board Member Julian Bene voted against it, after asking for a deferral that wasn’t granted.

“I believe that there are better ways of achieving the affordable housing result that would have much less impact on what is a very congested and actually dangerous intersection at Tenth and Monroe and the Eastside BeltLine trail,” said Bene. He also said he doesn’t feel that the city is getting full value from the transaction.