The YWCA of Greater Atlanta has selected Danita Knight to be its new CEO, succeeding Sharmen Gowens who announced her plans to retire earlier this year.

Knight, currently vice present of communications and marketing at Agnes Scott College, will assume the role in January 2023. 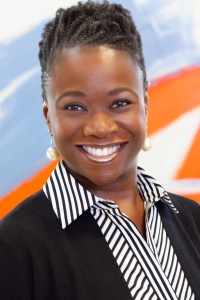 “After a wide-ranging and thorough national search, led by Boardwalk Consulting [a national firm based in Atlanta], we have found an accomplished and experienced person to lead our organization,” according to a statement by Jennifer Winn, the YWCA’s board chair. “Danita is well respected in the Atlanta community and will provide significant thought leadership. She will take YWCA of Greater Atlanta to greater heights as we confront so many issues that directly impact women and girls.”

Knight is no stranger to Atlanta’s civic circles. She is a past board chair of the Atlanta Women’s Foundation, where she led the fundraising efforts for its “Numbers Too Big to Ignore” luncheons for four years.

She also serves as vice chair of the Brookhaven Social Justice, Race and Equity Commission. Knight was also part of the original group of “seed funders” responsible for bringing the WNBA Dream to Atlanta.

“I am thrilled to have this opportunity to serve as the next CEO of YWCA of Greater Atlanta,” Knight said in a statement. “I am coming to this organization with so much reverence for its 120-year history and for the leadership, staff and volunteers who have worked so diligently over the decades to bring its mission ‘to eliminate racism, empower women and promote peace, justice, freedom and dignity for all’ to life. I look forward to working with the board, staff and community partners to further enhance the lives of women and their families in this community.”

Before joining Agnes Scott, Knight was a strategic communications consultant in Atlanta for more than 13 years. She moved to Atlanta in 2004 from Indianapolis after her husband — Billy Knight — became general manager of the Atlanta Hawks. In Indianapolis, she served as vice president of public affairs and community relations for the National Collegiate Athletic Association from 1999 to 2004. Previously, she served as director of public relations for Anthem in Indianapolis. 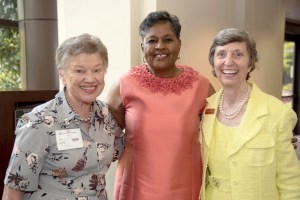 Ann Curry of Coxe Curry & Associates with Sharmen Gowens and Ann Cramer of Coxe Curry at the 2022 Salute to Achievement event at Georgia Power. (Special.)

Knight is a graduate of the University of Missouri-Columbia School of Journalism. The Knights have two adult daughters.

Both professionally and personally, Knight has been a mentor to young women at Agnes Scott — an all-women college — and in her personal endeavors. She has been nurturing a couple of dozen younger women for years by hosting regular dinners for them to learn from invited speakers or to share experiences with each other.

Gowens could not be more excited to be turning over the reins to Knight, saying she feels good about the future of the organization.

The YWCA of Greater Atlanta has been a voice for change for women and families in Georgia since its founding at Spelman College in 1902. The nonprofit is built upon a foundation of mobilizing diverse groups of women leaders to identify community problems and advocate for solutions. It addresses the needs of women and girls at multiple levels, providing direct services and programs raising awareness of public policy issues.

By focusing on advocacy and social justice, health and safety, education and economic empowerment, the YWCA works to improve the lives of women and girls and their families and to create safer, healthier, more equitable communities in Georgia.