Doug Hooker gained inspiration from Andrew Feiler’s books for his most recent composition.

Inspired by Feiler’s first photo book of the same name and his recent “A Better Life for Their Children: Julius Rosenwald, Booker T. Washington and the 4,978 schools that changed America,” Hooker will premier his symphonic creation during the Black History Month concert of the Trey Clegg Singers on Feb. 6. 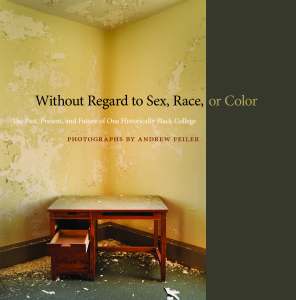 “Without Regard to Sex, Race or Color” book cover. Credit: Andrew Feiler

“I think for each of us, it’s an important story and through our mutual art and collaboration as well as our friendship,” Hooker said. “We symbolize the historic Jewish and African American alliance that has done so much through the years to advance civil and human rights in this country and beyond.”

The 20-plus-year friendship turned into collaboration when Feiler asked Hooker to write a musical composition to be showcased during his “Without Regard” exhibit at the National Center for Civil Rights at the Lorraine Motel in Memphis, Tenn. He then told Hooker about his second book, which continued the work they started.

“And he said ‘well, would you consider writing the second movement since I got the second book coming out?’ and I said ‘okay, you’re on,’” Hooker recalled.

“Doug and I started as civic collaborators and when I started down this path of trying to figure out a way of doing my own work more seriously, one of the first questions I had to address was what was my voice as a photographer?” Feiler said. “What I found were the topics that I was drawn to were an extension of my civic voice. That’s how I ended up with this first book as a portrait of an abandoned college campus.”

“Without Regard to Race, Sex or Color” documents the largely abandoned Morris Brown College, which Feiler addresses the issue about the essential role education has played as the foundation of the American dream.

“I used that emotional disconnect to raise awareness around the past, present and future importance of Historically Black Colleges and how education has been the backbone of the American dream on the ramp to the American middle class for all Americans throughout our entire history,” Feiler said. 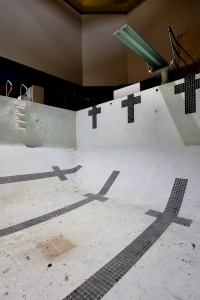 The diving board at the John H Lewis Complex at Morris Brown College from the book “Without Regard to Sex, Race or Color.” Credit: Andrew Feiler.

When Feiler first had the idea to create “Without Regard,” he called up former Morris Brown Vice-Chair William “Sonny” Walker, who then set him up with then-president Stan Prichard to set the details for him to shoot.

“We’ve been in these classrooms, we’ve walked these hallways and yet we’re used to seeing them populated by people and not by ghosts,” Feiler said.

Feiler described the idea for his second book as the earliest collaboration between Jews and Blacks. “A Better Life,” tells the history of an educational program created through the friendship of Sears, Roebuck and Co. president Julius Rosenwald and Tuskegee Institute president Booker T. Washington from 1912 to 1932.

“They created this program that built 4,978 schools across 15 states and the results are transformative and extraordinary unheralded hidden history, lays the foundation to dramatically expand African American attainment,” Feiler said. “The [Rosenwald Schools] sets the economic foundation for generations of African Americans to come and educates many of the leaders and foot soldiers of the Civil Rights Movement to come.”

Feiler drove nearly 25,000 miles to photograph the schools — what’s left of them.

“This is a remarkable story that very few people knew. I never even heard of the program until 2015 myself, and I’m a fifth-generation Jewish Georgian,” Feiler said. 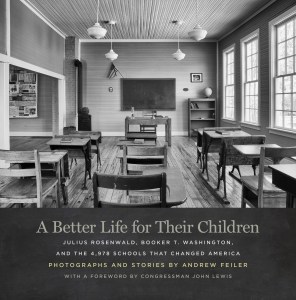 “I’m the son of a family of teachers and I never heard of this,” said Hooker.

A student at one of the schools himself, “A Better Life for Children,” former civil rights activist and Congressman John Lewis wrote the foreword to Feiler’s book before his passing in 2020.

Hooker composed the three-movement symphony after taking a deep dive into the context of both books. He gave the first movement the feeling of “heavy lifting” by beginning the score with the bass going into higher repetitions and representing the different stages that lift different levels of advancement as the instruments build on each other.

“The second movement is completely different. I want to talk about the two men and their partnership,” Hooker said. “You’ll hear a little bit of spiritual history but it was also a fundamentally American thing of the two men trying to use their talents, their treasure and how their relationship to advance people without means.”

He went on: “The third movement is completely different because it says where there is a space and a time and a place when the straitjacket of race no longer defines us. Until we reach that time, knowledge and education, knowledge is the way to manage this precarious existence and describe African American life as a precarious existence and education is the compass to define me so that others do not define me in ways that put a straitjacket on me because of my race.”

“I gave it to him so he could give me some feedback technically, specifically the choral parts,” Hooker said.  “[He] said ‘Doug, I want to conduct this.’” 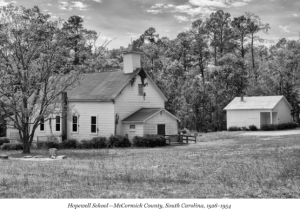 The Hopewell School in McCormick, S.C. 1926-1954 from the book “A Better Life for Their Children.” Credit: Andrew Feiler.

However, Hooker had already started the process of finding sponsors and a conductor at the time of Clegg’s request, “He said ‘no, no I want to do it for you; allow me to do this,’” Hooker said.

Not only did Rosenwald and Washington’s relationship remind Feiler of his relationship with Hooker, he also thought of another recent history-making collaboration: Senators Jon Ossoff and Raphel Warnock.

“What they did together exactly one year ago campaigning together for two months crisscrossing the state and Georgia sends its first Jewish and African American senators to Washington, I think that our collaboration is rooted in foundations set by the collaborative relationship but the deep friendship that Julius Rosenwald and Booker T. Washington shared,” Feiler said.

The musical version of “Without Regard to Race, Sex or Color” will be performed by the Trey Clegg singers during their Black History Month concert on Feb. 6 at the Ferst Center for the Arts at Georgia Tech. Tickets are on sale now.