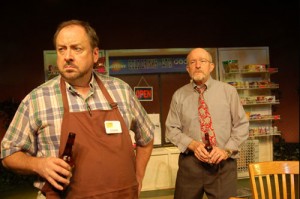 “I just want to know one thing: How do we stop the refugees from coming here?”

That faceless voice rings from a cast member planted in the audience at the Horizon Theatre. The play is“Third Country,” a drama based on the seismic change in Clarkston, which in the past 20 years has transformed from a predominantly white Atlanta suburb into what Time magazine called the most diverse square mile in America.

In this play by first-generation Egyptian-American Suehyla El-Attar, Clarkston is called Sidington, and the plot captures the intense emotions and misperceptions across our country about newcomers and the meaning of home, between ourselves and our shared space.

Third Country’s tension is set early in the play, when a public meeting pits the city’s mayor, the local head of a resettlement agency against angry residents. The emotions swing between keeping the refugees out of Sidington and keeping the promise on the Statue of Liberty, to welcome the tired, poor and “huddled massed yearning to breathe free.”

No stock characters or easy answers make the play feel authentic and provocative. That was El-Attar’s aim, to reveal the lives of entrenched Americans (and their biases) with those of refugees (and their baggage, too). 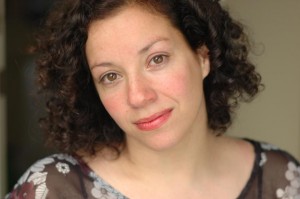 “Wouldn’t you want to know who they are? Wouldn’t you at least want a formal introduction? Wouldn’t you feel a bit violated? Wouldn’t you be upset?” El-Attar asked. “It may be anti-American to be opposed to people coming here, but it’s human to feel overtaken.”

The play was just extended beyond its five-week run in Little Five Points until Thursday, Oct. 24, with a special matinee performance for students and senior citizens scheduled the following day.

In the middle of the emotions is El-Attar’s mayor, something of angst-ridden public official who boasts having an open door for all residents. Malcolm (Tom Thon) appreciates government funding that helps build a new community center and other amenities; the money comes with taking in the newcomers. He listens to their concerns, but in a public dispute, will he side with them or Sidingtonians who can vote?

Meanwhile Mary-Margaret (Tess Malis Kincaid), the resettlement official, suffers from some degree of shortsightedness. She sees her job as getting the refugees moved in, helping them find work and then letting them “fly” on their own. But shouldn’t she recognize a larger responsibility to them and the community? 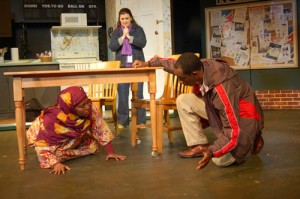 Sasha (Marcie Millard), the resettlement case worker, is the character with whom El-Attar said she most closely identifies. Sasha is the naïve and perhaps overeager one who freely admits she habitually puts “foot on foot” in her mouth.

Her use of idioms are a source of bewilderment for her main client Nura (Cynthia Barker), a newcomer from Somalia who arrives with nothing but her brother’s soccer ball, sleeps on the floor even though her apartment has two bedrooms and hides under a kitchen table whenever gunfire erupts from a neighbor’s video game console.

The play also focuses on Asad  (Eric J. Little), a Sudanese refugee close to obtaining his citizenship, and Charlie (Bill Murphy), a grocer sympathetic to the refugees.

Dramaturgy behind the headlines

Some in the audience will recognize various events in the play that actually took place in Clarkston. Among them are references to unflattering national newspaper stories about the city’s handling of it refugee population and accusations of harassment by police of refugees playing soccer in Clarkston’s public park.

The story of the Clarkston soccer team, the Fugees (short for refugees) and their struggles on and off the field are detailed in “Outcasts United: An American Town, a Refugee Team, and One Woman’s Quest to Make a Difference” by former New York Times reporter Warren St. John.

When El-Attar was first approached by Horizon Theatre artistic director Lisa Adler about creating a play about Clarkston, she considered adapting the St. John book. However, a planned movie put it out of reach. So El-Attar set out to write out her own story.

She began bicycling from her Decatur home to Clarkston in late 2011 to get to know the town and interview residents. A story emerged from composites she gathered there. A year and a half later, and about a dozen scripts (and counting), “Third Country” was in production. 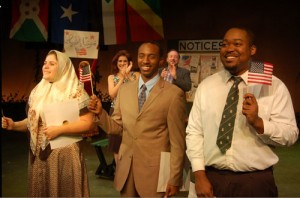 Besides the real history, no doubt El-Attar drew upon her own background to enliven her characters. Her parents are from Egypt and came to this country so her father could attend the University of Pennsylvania on scholarship. Their status changed from student visa to stranded after Gamal Abdel Nasser into power and made anyone friendly to the U.S. an enemy of the state.

El-Attar’s father took a teaching position at Mississippi State University in Starkville, Miss., and raised a Muslim family in a town of 24,000 that was predominantly Protestant. The experience led to El-Attar’s first play, “The Perfect Prayer.”

At the heart of “Third Country” is the need for humanity to all just get along. Simply put, said El-Attar,  it “is about the importance of not being a (jerk) to anyone … ever.”

And like the city of Clarkston itself, the story isn’t over even though the play is ending its run. In the Nov. 5 municipal elections for mayor and city council, voters will choose among a slate that includes three former refugees.

Meanwhile, “Third Country” is a vibrant work in process. El-Attar is a fierce editor, tweaking her dialogue between shows.  “There are so many rewrites,” El-Attar said. “The script is not done.”

Ben Smith can be reached at benzymyth@gmail.com.