A scientist working to groom Black scientists at Savannah State University was recognized Tuesday with a 2021 Clean 13 award from the Georgia Water Coalition. 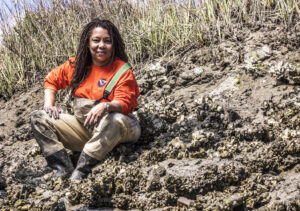 One measure of Dionne Hoskins-Brown’s success is in the numbers: 13 grads went on to earn masters degrees; three have pursued doctorate degrees after completing a program sponsored by NOAA that’s intended to foster Black students who may want to put their skills to work at NOAA.

When Hoskins-Brown describes her work in the Department of Marine and Environment Science, success is much more than numbers.

It’s about fostering her students’ sense of service to country –

It’s about belief in human potential –

And it’s about respecting the linage of a program that began as the fruit of an unusual scientific alliance. 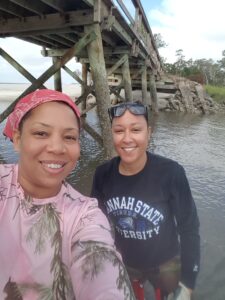 In 1973, a collaboration was established by Margaret Robinson, the Black, female head of Savannah State’s biology department, and Bradford Brown, a white, top scientist with the National Marine Fisheries Service at Woods Hole lab in Massachusetts. Robinson reached out to Brown and he responded with collegiality rare for the era. This how Savannah State first developed its relation with the National Marine Fisheries Service, which is a division of NOAA, Hoskins-Brown said.

“If you pair someone that engaged and bold in the ‘70s with an equally tenacious, infinitely educated Black woman, you’ve got to get out of the way,” Hoskins-Brown said.

Brown provided money for Robinson to visit marine labs on the East Coast. Robinson used the information to develop by 1978 a curriculum for a potential program at Savannah State, Hoskins-Brown said.

The University System of Georgia adopted the proposal as part of its response to a federal lawsuit alleging violations of Title VI of the Civil Rights Act. Georgia was accused of maintaining a racially segregated higher education system. Two schools in Savannah seemed to support the claim – historically Black Savannah State and historically white Armstrong University. The solution included a deal to offer a business degree at Savannah State and a teacher education degree at Armstrong State, according to a report by georgiaencyclopedia.org.

The new marine program developed by Robinson, offered at Savannah, provided a niche for students of all backgrounds. 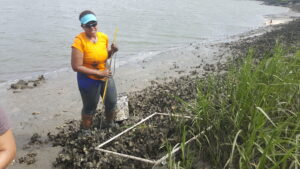 Hoskins-Brown has worked at Savannah State since 2000. Her paycheck comes from NOAA and she has faculty rank, as associate graduate professor, though she’s not on faculty or on a tenure track. Her titles include director of NOAA sponsored program at Savannah State, and chair of Gullah Geechee Cultural Heritage Corridor Commission, a federal National Heritage Area.

In her own college days, Hoskins-Brown pursued an unusual academic track that reflects abilities she demonstrated as a youth. She skipped a masters degree. She earned her bachelors degree in marine biology from Savannah State. She was accepted straight into the doctoral program at the University of South Carolina, from which she earned in 6 ½ years her Ph.D. in marine sciences.

Of the award that is the highest the Georgia Water Coalition offers, Hoskins-Brown offered this insight: