Note: Michelle fills in this week. I’ll be back with my next column soon.

With her two-month-old baby strapped on, Brit St. Clair of Decatur was not in prime position for clothes shopping. Her body wasn’t back to where she wanted, and she didn’t want to spend a lot of money on an in-between wardrobe. On a rainy Sunday afternoon in late spring, she and 40 women enjoyed the girlfriend vibe as they reinvented their look for less by trying on each other’s discarded clothes. 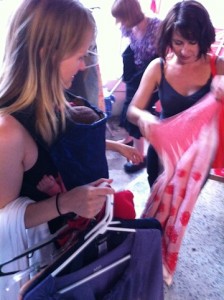 For just $25, she had the pick of a room full of gently-worn (some even new) clothes and accessories with tags from J. Crew to Abercrombie to Vera Bradley. With baby Norah on her back, St. Clair found dresses, shirts and more that fit her for now. Around her swirled other women who picked through clothes, some of which St. Clair had donated from her own wardrobe.

“This is my first swap, and I’ve found pretty good stuff for me,” St. Clair said. “It’s an awkward transition between maternity and the size I was before. And I like the idea of recycling, that what everybody gives to the swap gets reused.”

Given Take Boutique – a pop-up business that on this afternoon set up in the Hodgepodge Coffeehouse on Moreland Avenue – is the brainchild of energetic entrepreneur Adrienne Lewis Tankersley, a mother of three who lives in nearby East Atlanta. After she left her career at Manheim Auctions to stay at home with her children, budgeting on a single income made her extra mindful of stretching a dollar.

Tankersley’s first swap was arranged as a party for her friends to pick through “my awesome wardrobe that no longer fit,” she says. Over cocktails, crystal and silver, everyone brought their nice clothes that they no longer wanted or could fit into. One woman’s castoff was another’s fantastic find. 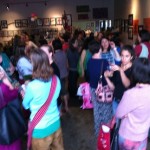 Shoppers mingle before the April 28 swap at Hodgepodge Coffeehouse in East Atlanta.

“Since I began swapping I have worn five different sizes,” said Tankersley, whose children are aged 7, 4 1/2 and 1.  “Everything I wear is from a swap at this point.”

In 2011, Tankersley and co-founder Meg Richards-Boeff started looking for a place to host regular swaps for larger groups, and located empty houses for sale in the sluggish real estate market. It was an open house for a purpose, as the house got a close look from young moms who lived nearby.

As her swaps gained popularity, Tankersley began selling sponsorships to businesses (including spas and organic baby products) interested in the intown family market; today,  swaps usually include raffles and sometimes massages and makeovers. She set tickets at $25 to $35, “less than the cost of one item of clothing.”

To ensure nothing is wasted, whatever apparel and accessories remain after a swap are donated to agencies that help women in need.

For just a little green (money) shoppers like St. Clair got to feel very green (eco) as they combed through the rolling racks of clothing in the art gallery. Even though any shopper can take as much as she wants, no one appears green (with envy); there’s no snatching or grabbing. “This would look great on you,” is heard more than once. If this was a reality show, it could be titled, “Say Yes to Somebody Else’s Dress.”

“At first I was skeptical because it sounded like it would be crazy, with people knocking people over and getting trampled,” said Amber Rhea, a seasoned swapper who used to shop at Old Navy and Target.

“I don’t care that much about reusing clothes, but I checked it out because we were really on a budget — I work part-time and I’m in graduate school and we have a 2-year-old son. As soon as I came I was sold. I got some Calvin Klein jeans that I would have never bought, plus I got rid of so much stuff in my closet that I didn’t feel like selling on Craigslist or giving to Goodwill.” 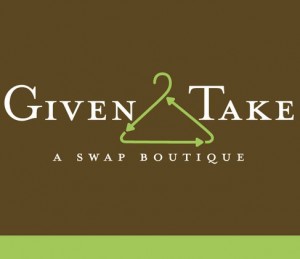 Tankersley set the tone of generosity with a happy hour of wine, lemonade and fancy hors d’oeuvres, and the women sipped and mingled as volunteers prepared the racks and tables of clothing by sizes. As the women waited, Tankersley gave a short spiel about treading more gently on the earth by keeping only the clothes that you will wear. (The Given Take logo, after all, is a green recycling triangle symbol, flattened and with a hook at the top to resemble a clothes hanger.)

“This isn’t Filene’s Basement,” she told them. “It’s sustainable.”

Expanding on that later, she explained: “Consumerism has presented itself as a real issue among women in my age group. All products everywhere are marketed to us, and unless we become aware of that and intentional in our spending, we will be swayed into buying ‘allthingsallthetime.’ By hosting large swaps, I feel like I can look over the sea of merchandise and happy ladies and just feel the impact we are having on the supply/demand chain. Take that!” 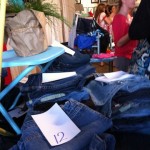 Each woman had brought at least 10 items; some pitched in what seemed like an entire wardrobe. The tables and racks were full of brands like Ann Taylor, Talbots, Dansko and Banana Republic. Shoppers in sizes 6 to 10 were particularly in luck, but there was something for everyone.

The swaps are rooted, but not limited to, Tankersley’s community of new moms, and her events are as much about support for each other as clothes for each other. When one new mom at the April swap frowned at her appearance in the dressing room mirror, another quickly gave her a reality check: “You just had a baby a year ago!”

Another woman outside the curtain tried on a cute sweater. “It’s maternity, but I’m not pregnant,” she said. 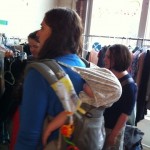 Clothes swapping and shopping with baby on board.

“If you don’t take it, I want to try it,” replied a nearby shopper.

The scene was, as one shopper described, an escalator of clothes—with clothes coming back to each rack as shoppers rejected all but what they knew they would wear.

Each shopper took home her “new” apparel in an appropriate souvenir: a tote bag made from an old T-shirt.

“Thanks to whomever brought the brand new Vera Bradley purse,” shopper Michelle Moro-Howard wrote on Given Take’s Facebook page after the event. “I love it … Maybe I can stop carrying a diaper bag and wear an actual purse someday soon:)”

“Shopping always makes me feel so insecure and disappointed,” swapper Jessica Roylance Shepherd wrote. “Swapping, on the other hand, is so empowering and fun. Everyone there is invested in you walking away with the perfect pieces for you, and you know that clothes you once loved are going to good homes in the closets of your new friends. Long live the swap!!”