Executives with the Atlanta Braves were in a celebratory mood Tuesday night after the Cobb County Commission voted 4 to 1 in favor of the agreement to build a $672 million stadium near the I-75 and I-285.

“This is a most significant and historic day for our franchise,” said John Schuerholz, president of the Atlanta Braves, after the vote. “This gold standard franchise is joining with this gold standard county. We are thrilled with how this turned out tonight.” 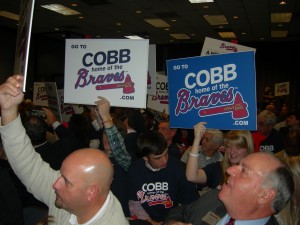 The meeting of the Cobb Commission lasted for more than two-and-a-half hours with most of the time being turned over for public comment.

About 275 people filled the standing-room only meeting area and dozens of others were able to watch the proceedings from an overflow room.

Passions were high with about half of the crowd being those supporting the Braves move to Cobb County — most of those being business leaders carrying slick posters with the Braves logos.

The rest of the crowd included an assortment of folks who were urging for a delay in the vote so they could have more time to study the deal to those who were against any public funding in a sports stadium. About $300 million of the project is being financed through public funding, including increased taxation among property owners in the Cumberland Community Improvement District as well as a reallocation of bond money that voters had approved to go to parks until 2017. 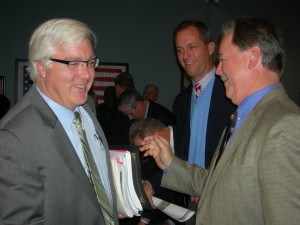 The Braves deal would extend that funding to help pay for annual operations of the stadium, but Cobb Commissioners do not plan give voters a chance to approve that extension and reallocation of funds.

Public comments varied from those who called the Braves move to Cobb a “once-in-a-lifetime” opportunity to those who were incredulous that the Commission was being asked to vote on such a financially complicated deal which only  surfaced two weeks ago.

“We spent two years discussing whether we could have chickens in our backyards, and we are spending two weeks on how we’re spending $300 million,” one Cobb County resident told the Commission who called the deal “taxation without representation.” 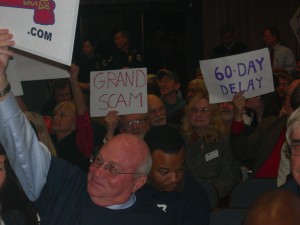 After 23 people spoke, including one woman — Susan Stanton — presented 791 petitions compiled by Campaign for Liberty that  called for no taxpayer funding to be spent on professional sports facilities.

After the period of public comment, Cobb Commission Chairman, who had predicted that the deal would be approved by a unanimous vote, made the motion to move forward with the memorandum of understanding with the Atlanta Braves.

He did see that a couple of changes had been made in the MOU. Lee said the Atlanta Braves had agreed to a $35 million cap on the county’s share of the “capital maintenance fund.” Maintenance costs previously did not have a cap, and Cobb County and the Braves would have split those expenses. 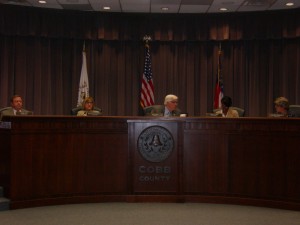 The second change in the MOU was to remove the “arterial railway,” which Lee said might not be able to be built by 2017 when the Braves plan to begin playing in the new stadium.

The one commissioner who voted against the MOU Tuesday night was Lisa Cupid, who insisted that she supported the Braves move to Cobb County. But she said that some of her concerns about the deal “still linger,” and that she couldn’t vote yes without Cobb County completing all the due diligence on the deal.

She also said that the pressure for her to vote for the deal had become personal. 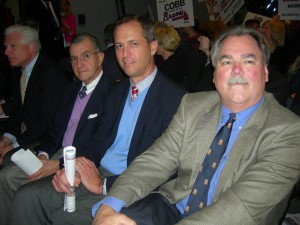 “It frightens me the number of threats I have received,” Cupid said. “If you wanted a 5 to 0 vote, you could have gotten it. But I won’t ever be bullied into sacrificing my position by the people who put me in this position.”

She ended her comments by saying that she could “not in good conscience vote for the MOU, but I do support the Braves being here in Cobb County.”

Commissioner Joann Birrell said she was following her convictions by voting in favor of the MOU.

Bob Ott, who at times sounded as though he might support a move to delay the vote, said he had received about 2,000 emails and another 1,000 phone calls. He said he did not believe a 60-day delay would mean that he would get more information that would change his mind. 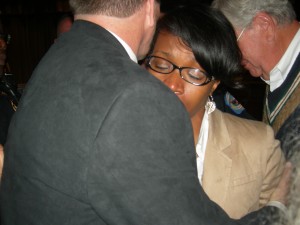 And Commissioner Helen Goreham acknowledged that the work that has occurred in the past couple of weeks has been at “an accelerated pace,” but it hasn’t happened so fast that she wouldn’t be able to support the move.

The commissioners then voted 4 to 1 in favor of the MOU, and the pro-stadium crowd erupted in applause and cheers.

At the press briefing after the vote, Braves’ executives said they were listening to those who had concerns about the deal. 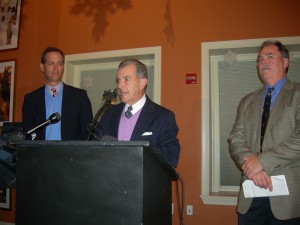 Mike Plant, the Braves’ executive vice president of business operations, said that a delay would have hurt the tight development, design and construction schedule so that the team can play in the new stadium in April 2017 and have the adjacent entertainment and retail complex open at the same time.

The Braves will play in Turner Field for the next three years until their lease runs out at the end of  2016.

“We got to one finish line tonight,” said Plant, who did not elaborate on the other finish lines that the project faces going forward. Asked whether the Braves could back out of the deal, Plant answered: “It is a legally-binding document. We are coming to Cobb County.”