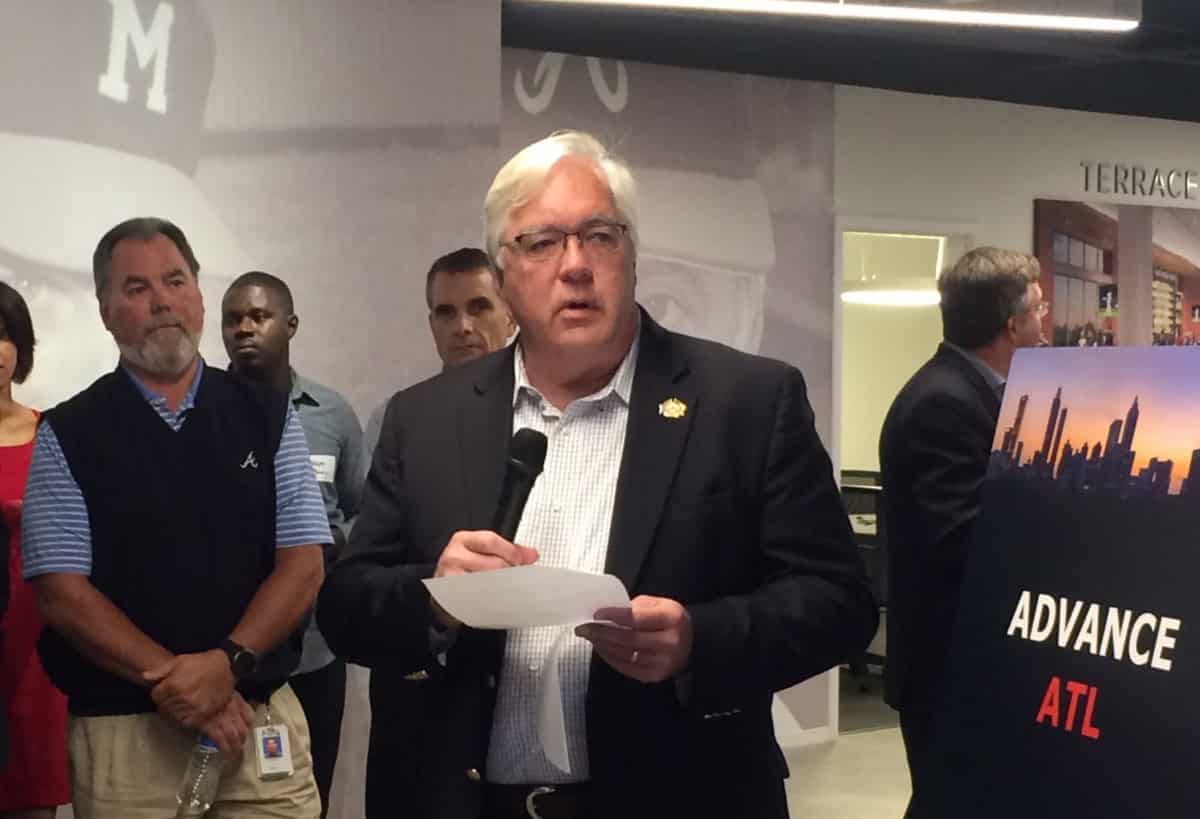 It’s hard to mention Cobb County and transit in the same sentence without stirring up all sorts of emotions.

That actually was the intent of Advance Atlanta, a group of millennials who care deeply about our region’s future, when they held a program – Transit Talk: Cobb – on Oct. 20. 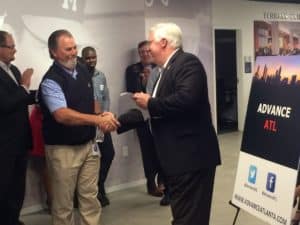 Better yet, the talk was held in the Experience Center of the Atlanta Braves, which overlooks the team’s new home now under construction – SunTrust Park.

And Advance Atlanta purposefully convened the meeting for 5:30 on a weekday (rush hour) so people could experience the traffic challenges facing Cobb County, according to Danielle Elkins, vice president of the group.

Although officials from the Atlanta Braves spoke during the official part of the program, they did not directly address their thoughts about transit in Cobb.

Remember, one of the major complaints the Braves had had about playing baseball at Turner Field was transit access and the fact the MARTA rail line was a mile away.

“Cobb County has been at the epicenter of conversations about regional transit for a very long time,” said Nick Juliano, president of Advance Atlanta. “And the Braves stadium and transit were the subject of a lot of conversation when it was first announced they were moving to Cobb County.”

Mike Plant, the Atlanta Braves vice president of operations, deftly deflected questions during the program and then had to leave the event. 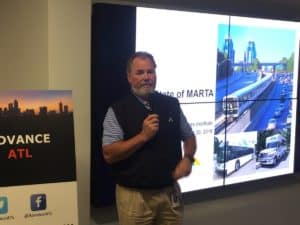 But when he was reached on his cell phone later, Plant made it clear he supports the idea of bringing transit to Cobb.

“We would be advocates of that – absolutely,” Plant said.  “Everyone has to take emotion out of it and look at every possible solution and put them on the table.

The growth is going to continue. You can’t keep thinking you are going to expand roads.”

Plant said during the conversation that he driving alone in his car, and the cars next to him had only one person – the driver. As a board member of the Cumberland Community Improvement District, Plant said they have been focused on creating transportations options for people to get around the area – such as walking, cycling and the circulator bus.

For example, the pedestrian bridge over I-285 is going to be open 365 days a year, and with the availability of bicycle racks and sidewalks, people are going to be looking to get around in different ways.

Plant also said that students attending Kennesaw State University and millennials are looking for options, and those options include transit. 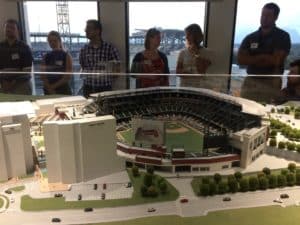 Model of new Braves stadium it is in the Experience Center, which overlooks the actual construction of SunTrust Park (Photo by Maria Saporta)

“We have got to be open-minded,” said Plant, who acknowledged that transit hasn’t been his top priority during the development phase of SunTrust Park.

But he supports “bringing in the experts” to help the community figure out what would be the right solution – whether it should be heavy rail, light rail or bus rapid transit.

When asked if the transit option should be part of Cobb County’s bus system or whether it should be part of a regional transit system, Plant said he favored a “regional solution” because that’s “probably the most effective.”

Even though Plant didn’t use the word “transit” in his public comments, he did talk about wanting to be a good neighbor in their new Cobb community while knowing the stadium would add congestion to the area.

“We are going to have an impact on people’s lives,” Plant said. “There’s a traffic issue in your town. We are going to be part of the solution. We are heavily invested here.”

The history of Cobb County and transit dates back nearly 50 years. The original vision for MARTA included rail lines reaching out to Cobb and Gwinnett. But neither one of those counties opted to join the MARTA system.

Fulton and DeKalb counties along with the City of Atlanta approved MARTA in 1971. Clayton County voted in 2014 to join the MARTA system, agreeing to pay a penny sales tax to the transit agency. Half the penny is going to increasing bus service in the county and the other half is going towards building out a high-capacity transit system (commuter rail or bus rapid transit) that would connect Clayton county with the rest of MARTA.

The Transit Talk: Cobb program also provided a window into the political forces at play in the county. 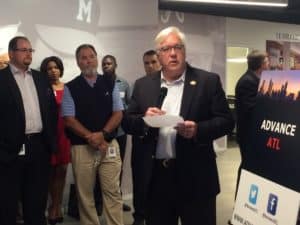 Outgoing Cobb Commission Chairman Tim Lee was particularly poignant in his remarks. Lee was defeated in his bid for re-election earlier this year partly because of his deal with the Atlanta Braves and his views toward transit.

“I’m a champion of transit expansion,” Lee said. “I was a very vocal advocate for transit. I learned the hard way that it’s not up to me. Elected officials can’t change things from the top down. This is a bottom-up discussion. Right now the voters in Cobb County don’t have an appetite for transit or maybe they don’t have the appetite to pay for it.”

Lee told members of Advance Atlanta that most people in the region agree with them.

“Not a lot of people believe it’s okay to be sitting in traffic,” Lee said. “I really don’t think we need to persuade voters that we need more transportation options. It’s whether or not they’re willing to pay for it. We don’t need to convince voters that they want transit. We have to convince them to pay for it.

Lee went on to say the “MARTA expansion on the ballot in the City of Atlanta is huge.” And it could influence future economic growth in the region.

“If we don’t do anything today, we will fall further behind tomorrow, and our region will suffer,” Lee said. “We must convince voters that just like they invest in roads, and they do a lot, we need to get them to invest in transit.” 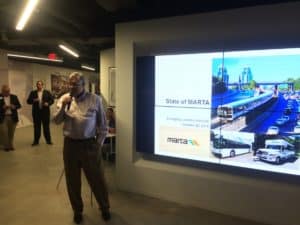 Tad Leithead, chairman of the Cumberland CID, said Cobb is being crossed off the list of economic development prospects because it doesn’t have high capacity transit (Photo by Maria Saporta)

Also taking an economic perspective was Tad Leithead, chairman of the Cumberland CID. He and Gwinnett developer Emory Morsberger jokingly said they had a bet of whether rail transit would first come to Cobb or Gwinnett.

Leithead said companies looking to expand in the Atlanta region are crossing Cobb off the list because it doesn’t have transit – pointing to Mercedes-Benz and State Farm.

“For Cobb and Gwinnett to be truly competitive in market where we compete – internationally, we have to have transportation choices,” Leithead said. “Those choices have to include a reliable efficient transit solution. Traditional reasons for transit not coming to Cobb Braves are obsolete. The millennials are going to drive the push for transit.”

What was most amazing about the “Talk Transit: Cobb” program was how openly leaders talked about the need for more transit in the county.

They were part of a growing consensus that the status quo can’t continue.