A public authority in Cobb County may have the financial capacity to help pay for the planned Atlanta Braves stadium without a vote by the public, the county Board of Commissioners or a city council. 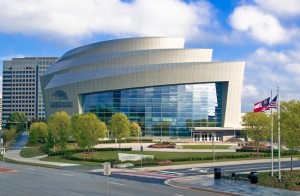 The Coliseum and Exhibit Hall Authority (Cobb-Marietta) has the sole power to set the hotel tax rate, according to state law. The Braves began talks with the coliseum authority in July, according to espn.com.

In 2010, the hotel tax generated in excess of $90 million. That figure is based on a report in the Marietta Daily Journal that an 8 percent payment from the authority to the Cobb County Convention & Visitors Bureau would amount to $8.9 million.

The authority would have until the end of 2050 to pay off the debt incurred to build a facility, such as a baseball stadium, according to state law.

The Braves announced Monday it plans to open the 2017 season in a new facility located in the northwest quadrant of the I-285/I-75 intersection. The projected cost is $672 million and up to $450 million of that amount is to come from an unidentified source in Cobb County.

Cobb Chairman Tim Lee has said the deal will be presented at the commission’s meeting Nov. 26, according to ajc.com.

The coliseum authority was created in 1980 by the Georgia Legislature for the purpose of, “acquiring, constructing and maintaining facilities for the general purpose of promoting cultural growth, education and welfare,” according to its website. 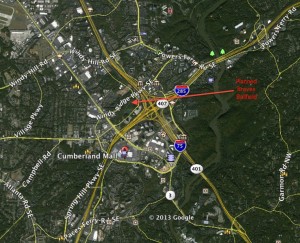 The Atlanta Braves plan to build a ballfield that’s in the midst of a grid of big roads that are served by three interstate highways. Credit: Google Earth, David Pendered

The board of the coliseum authority has seven members. According to Cobb’s website, the positions and incumbents are:

According to state law, a coliseum and exhibit hall authority created before 1991 may levy a hotel/motel tax of up to 8 percent. The current hotel tax rate was unavailable Tuesday morning, as the county tax commissioner office couldn’t provide it and the authority’s spokesperson was unavailable for comment.

The following developments and purposes can be financed by a coliseum and exhibit hall authority, according to state law:

Previous Article
What it would have taken for Atlanta to keep the Braves at Turner Field
Next Article
No minds are changed in Braves stadium meeting with Gov. Deal